Mother of Hodaya Nechama Assoulin at funeral: “You’ve given your life for Kiddush Hashem and we thank Him for depositing you with us.” 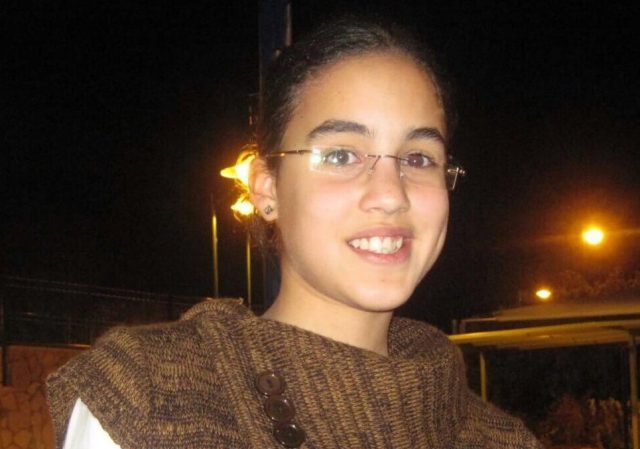 On March 23, 2011, a Palestinian terrorist detonated a bomb at a bus stop in Jerusalem, killing a British woman and injuring dozens, including six Americans.

Mary Jean Gardner, a 59-year-old British national who was studying at the Hebrew University in Jerusalem, was killed and about 50 people were wounded when a bomb weighing between 1-2 kilograms (2.2-4.4 pounds) exploded at 3 p.m. across the street from the Jerusalem Convention Center, near the Central Bus Station. The bomb exploded at a crowded bus stop next to Egged city bus #74. The explosion was caused by a bomb placed at a telephone booth near the bus stop. The victims had been standing at the bus stop or nearby when the device exploded. 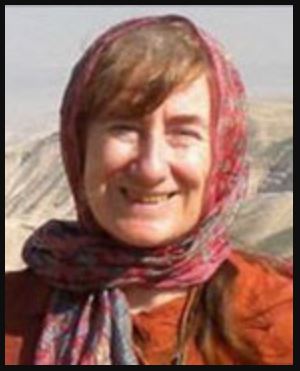 The MFA also has a photo album online, as does Getty Images. 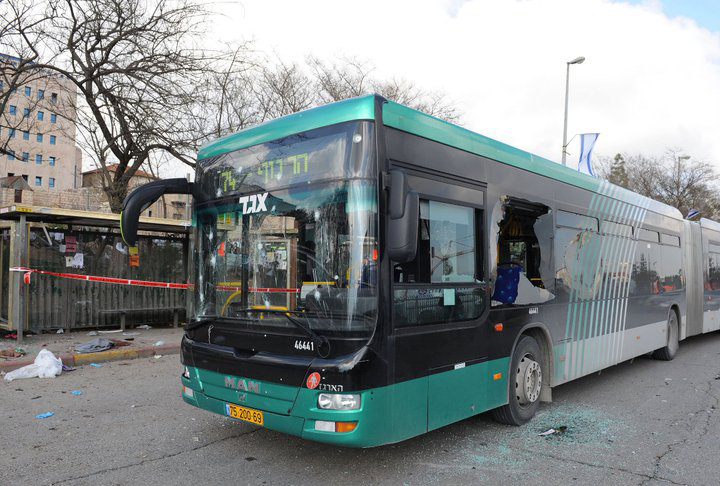 CBS News reported at the time:

A bomb struck a crowded bus stop in central Jerusalem Wednesday, killing one woman and wounding more than 20 other people in what authorities said was the first major Palestinian militant attack in the city in several years….

The 3 p.m. bombing occurred near the main entrance to Jerusalem, next to the city’s central bus station and main convention center, an area that is crowded with travelers and passers-by. The bomb went off next to a food stand called, in a Hebrew play on words, “a blast of a kiosk.” The owner said the name was to remember an earlier attack at the same site.

Ha’aretz reports that the bomb was tied to a telephone pole.

The blast reverberated throughout Jerusalem and blew out the windows of two crowded buses. Rescuers removed bloodied people from the area on stretchers, as sirens from speeding ambulances wailed in the background.

Authorities said a 60-year-old woman was killed, while two dozen other people were hurt, several critically.

This video shows the carnage:

Miss Gardner, who was a well-regarded Bible translator, came to Israel at the beginning of the year to study Hebrew and took courses at Hebrew University.

She had come to Israel to hone her Hebrew skills before embarking on a translation of the Old Testament into Ife, one of the languages spoken in Togo, West Africa.

In November 2013 the perpetrator of the attack, Hussein Ali Qawasmeh, was sentenced to life in prison.

At the time of the bombing, the family of Malki Roth, the teenager killed in the 2001 Sbarro Pizzeria bombing, wrote at their website, 25-Mar-11: The carnival moves on, the victims remain:

We know from personal experience how shattering is the experience of having terrorism rip into your life. The attention of outsiders – the media, perhaps; friends and neighbours; government officials and public figures – is there and then gone, sometimes in a flash. It’s the nature of our fast-moving societies.

Wednesday’s bus stop bombing [“23-Mar-11: We know these horrors only too well“] is over. The photographers, the wreath layers, the visiting politicians – they have moved on. The summing up has been summed: one dead, thirty-something injured in an explosion for which no one has taken credit though many have praised (“In Gaza, Islamic Jihad’s military wing said it welcomed the bombing“). The politicians have “condemned in the strongest terms” and the next item on their agenda instantly moved up the list….

The laconic term ‘injured’ does not begin to convey what has been done to them and the circle of concerned and loving friends and family around them….

One of the “injured” was 14-year-old Hodaya Nechama Assoulin.

Hodaya spent the next six years in a coma. She died today. The Times of Israel reports:

Asulin, who was 14 at the time of the attack, had been unconscious for the six and a half years since, receiving round-the-clock care from family, friends and volunteers.

“Her fight for her life inspired people to do so much good over these past six and a half years. It’s impossible to describe,” her uncle Rafi Asulin told The Times of Israel.

“I send condolences from the bottom of my heart to the family of Hodaya Asulin,” he said in a statement. “The entire Israeli nation is embracing and supporting the family, which wrapped Hodaya in warmth and dedication since the terrible attack. May her memory forever remain blessed and ensconced in our hearts.

Ynet News reports on the funeral:

Hodaya’s mother Michal eulogized her daughter. “You were given to us as a gift twice, once 21 years ago and again seven years ago. You made peace with your torments. It’s as if you said, “Whatever G-d Almighty does is fine with me,'” Michal said.

“G-d chose you to be a soldier for the Israeli people. You were tormented for the people of Israel and granted countless people at home and abroad the privilege to read Tehillim (Psalms—ed) in your honor,” the deceased’s mother continued….

Hodaya’s father Eliyahu read Psalms in her memory and then gave a eulogy of his own. “Thanks to Hodaya we held Torah lessons at home and many young people grew stronger in their faith. She taught us how much you can positively influence the youth,” he said.

Asulin’s father also said the prayer were not for naught and called on young people “to carry on praying with only a minor change, to say they were for the exaltation of the soul of Hodaya Nechama.”

Asulin’s mother then spoke of another disaster to befall the family in the past, in which she lost a baby, and said, “I explained to my friends prayers are never wasted. G-d simply chooses what to do with them.”

The mother then turned directly to her late daughter and said, “Pray for the people of Israel, pray for our family. You’ve given your life for Kiddush Hashem and we thank Him for depositing you with us. The Lord gave and the Lord hath taken away.”

Sad. Hodaya’s amazing family. Truly bittersweet. I can not fathom being surrounded by such evil.