She tweeted about it mid-October. 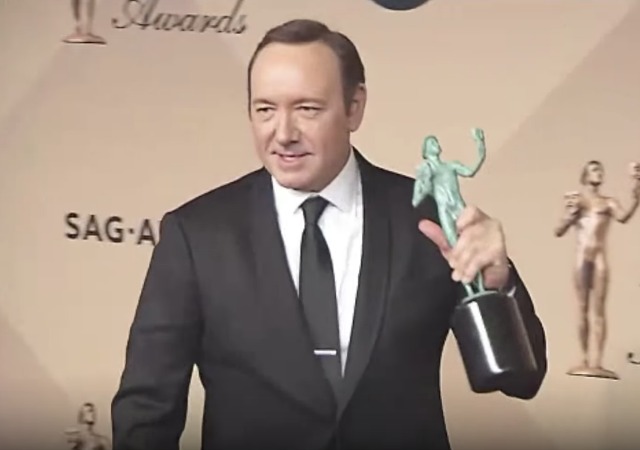 Fighting back tears, she said her son was a “star-struck, straight, 18-year-old young man, who had no idea that the famous actor was an alleged sexual predator or that he was about to become his next victim.”

Unruh claims Spacey bought her son several drinks and eventually stuck his hand in her son’s pants and grabbed his genitals without consent in the crowded, dimly lit club. “This was completely unexpected,” Unruh said, adding that her son panicked and froze.

When Spacey went to the men’s room, Unruh said a “concerned woman” approached her son and asked him if he was okay. “She told him to run,” Unruh said and her son left the restaurant and ran to his grandmother’s home. He woke his sister and the two of them called their mother, who came to Nantucket the next day.

“It harmed him and it cannot be undone,” Unruh said.

Her son chose not to file a police report with Nantucket police due to embarrassment and fear.” She spoke to the sheriff and he wanted her son to make the report.

He went to the police last week and filed a police report.

Believe it or not, Unruh was the first to make allegations against Spacey, not actor Anthony Rapp:

The #weinsteinscandal has emboldened me– #truth time. I was a Kevin Spacey fan until he assaulted a loved one. Time the dominoes fell pic.twitter.com/C0eiWEfHSO

Rapp’s story did not come out until October 30 in Buzzfeed. Unruh responded afterwards:

The dominoes are falling. My loved one will speak when ready. The headline is #KevinSpacey the #predator– this is not about him being gay. https://t.co/MWvCb8DkqU

Harry Dreyfuss, the son of Richard Dreyfuss, wrote at Buzzfeed that Spacey groped him in 2008 when he was only 18. Spacey allegedly did this while Dreyfuss’s dad was in the room:

Once again Kevin followed me, sat down, and with considerable effort, slid his hand between my right hand and my right leg. He’d snuck in. At this point I didn’t think there was anything I could do short of alerting my dad to what was happening. But I didn’t want to start a feud between them. I didn’t want the play to be threatened. This job really mattered to my dad, and Kevin was his boss. And besides, I thought, He isn’t really doing anything wrong…

And then he did. Over the course of about 20 seconds, centimeter by centimeter, Kevin crawled his hand from my thigh over toward my crotch. My mind went blank. Suddenly, he had completed his journey and now he had all of me in his hand. I stopped reading the script and my eyes went wide. I lifted up my head and faced him. Looking into his eyes, I gave the most meager shake of my head that I could manage. I was trying to warn him without alerting my dad, who still had his eyes glued to the page. I thought I was protecting everyone. I was protecting my dad’s career. I was protecting Kevin, who my dad surely would have tried to punch. I was protecting myself, because I thought one day I’d want to work with this man. Kevin had no reaction and kept his hand there. My eyes went back to the script and I kept reading.

I always thought he was a ‘D’ list actor, but if these allegations prove true, this guy is a very sick man who needs mental health counseling, and possibly prison time. He’s a pitiful figure.

Look at Spacey’s left index finger in the photo–is he groping the statue?

Culturally, this is important. Politically, it turns out to be important as well: the obama/clinton perv network, and its tentacles reaching into our government needs to be exposed.

People occupying high positions in our government have and are assaulting our republic – a much bigger story, and a much bigger screwing. Pun intended.

The parents of these Hollywood child-stars are wholly responsible for the welfare of their children. No excuses. From this day forward no parent should be allowed to claim ignorance of what happens to Hollywood children. Same applies to Hollywood agents signing and showcasing child actors. Talent agencies should be held to the same standards as any other employer (churches too.)

Entertainment studios forced to fund independent sworn ‘minder’ shops. Each and every child actor must be paired with a minder (like an air marshal,) those minders shall accompany children at all times – script readings to informal industry parties. Minders shall be sworn law enforcement officers.

Parents are responsible for the rape of their child, when they had no demonstrable reason to believe their child was at risk?

Concerning the parents: I cannot fathom why govt. social workers aren’t down these parents’ throats every day. We all see the adult results of child actors and very often it’s a wretched sight.

The parents have no excuse for leaving their vulnerable children in the vipers’ dens. This has been obvious for decades.

I have many friends who were sexually abused as kids. It’s everywhere and parents must be mindful in every situation – and look for telltale signs, as the children are typically too naive to understand what they should do.

An 18 year old adult male allowed a sex deviant whackjob to slip his hand into his pants – bypassing his boxer/briefs – and grab (work) his frankenfurter. While sitting in a public bar. The victim waited almost a year to file a police report because the sex whacko-deviant never called back with a film industry job offer?

Charley Sheen raping an underage Cory Haim? Sheen should be horse-whipped and set to prison.

The other 18 year old male allowed a 40 year old whackjob to fondle his package. The victim remained silent because stage-film industry money?

The notion that a sexual assault is somehow not a big deal because it was committed against an 18-year-old rather than, say, a 17-year-old would be amusing if it wasn’t so disgusting and despicable.

No wonder you go by a pseudonym. I don’t suppose your real name rhymes with “Kevin Spacey”?

This almost certainly has less to do with the acting gig possibilities and far more to do with the young man being utterly shocked by what occurred. If you’ve never thought about something happening, it’s possible you don’t know what to do at that moment. He DID leave the bar.

I have so many friends that were abused and have spent years reading about it and the fallout from it. It’s far more complex than you would believe. I have one friend that was a teenager when he was molested and he blames himself all the time for not doing more to stop it.

Beyond Betrayal by Richard Gartner helps. Fractured Mind by Robert Oxnam is helpful for those suffering from Dissociative Identity Disorder (multiple personalities).

Does Spacey coming out as gay absolve him of everything?

Bicurious. I’m still trying to figure out the new morality.