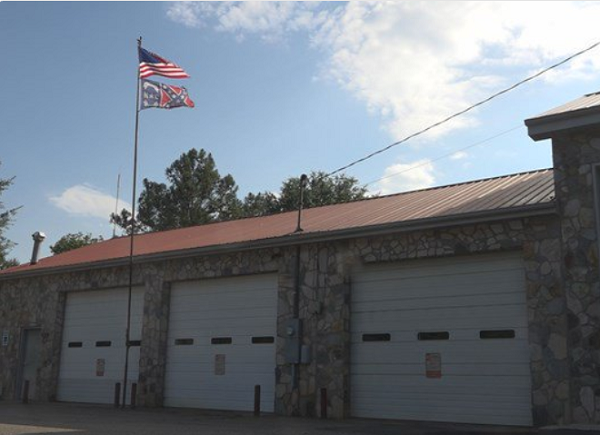 In North Carolina, a volunteer fire department has refused to stop flying the Confederate flag, so the city has issued an ultimatum:  take down the flag or lose full funding.

There’s a Confederate flag battle going on in a small town in Montgomery County.

The Uwharrie Volunteer Fire Department has been proudly flying the Confederate flag on fire station property for years.

“The flag is not hurting a thing,” said Lee Hudson with the Uwharrie Volunteer Fire Department. “We are not a racist department. We are not in any way. Members or the department as a whole.”

Montgomery County Commissioners, however, say the Confederate flag is divisive.

“The Board of Commissioners stated their position, that they did think the flag was inappropriate and requested for the fire department to take it down,” said Montgomery County Manager Matthew Woodard.

The Board of Commissioners sent firefighters a letter on Tuesday.

It’s an ultimatum to either remove the Confederate flag or lose full funding.

The Board of Commissioners say firefighters will only receive money for fuel and maintenance for two county-owned fire trucks.

. . . . “We would love to work with the County and for them to support us,” said Hudson. “But, we’re not going to move on the issue of taking down the flag.”

The Commissioners better hope they don’t need the services of the fire department.

I wonder if there are any taxes specifically earmarked to support the fire department? If so, sounds like the Commissioners can be sued.

Of all the stupid crosses to nail oneself to, this may be the stupidest.

it’s a VOLUNTEER fire department, so let the commissionaires do the time to learn how to be firefighters or HIRE certified firefighters.
otherwise STFU.
SJW’s at work –
BTW it’s a freedom issue for me not a political one and
if the volunteers are spending time (unpaid, presumably)to do
a community service, i don’t see how this is any different from
telling people what they are allowed in their own homes.

are the county officials now trying to incite a new uncivil
war ?

As a Yankee who spends some time in Chattanooga every fall, I say awesome. It is high time at least SOME of the wild-eyed Southern boys are standing up for their well-respected heritage. And by that I mean the Confederate flag, as well as the statues of their revered Generals, soldiers and politicians who resisted, nay, died for their beliefs in the War of Norther Aggression. Bravo……