“You used your position of trust that you had in the most vile way, to abuse children.” 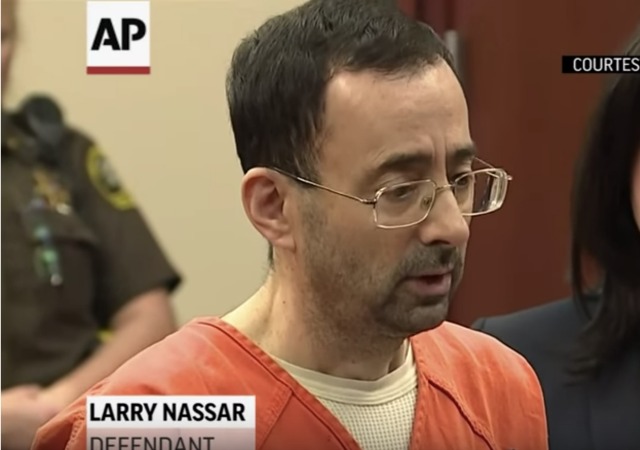 Last February, I blogged about the sexual abuse allegations against former U.S. Olympic Gymnastics and Michigan State University physician Larry Nassar. The allegations came up in September 2016 and by November the number of women grew to 50. The number is now over 140.

The number kept growing, with members of the latest U.S. Gymnastics team claiming Nassar abused them. An attorney representing one victim said the case is “Penn State all over again” due to “the same kind of institutional failures, involving multiple victims violated by a trusted staffer.”

On Wednesday, Nassar pled guilty to numerous charges of sexual abuse. His agreement with the prosecutors contained a prison sentence of 25 to 40 years.

Dr. Larry Nassar, 54, was charged with molesting seven girls, mostly under the guise of treatment at his Lansing-area home and a campus clinic. All but one of his accusers was a gymnast. He faces similar charges in a neighboring county and lawsuits filed by more than 125 women and girls.

Olympic gymnasts Aly Raisman, McKayla Maroney and Gabby Douglas are among the women who have publicly said they were among Nassar’s victims.

Three of those seven girls were under the age of 13 when the abuse took place. From NBC News:

“Guilty as stated, your honor,” Nassar told the judge, a hangdog expression on his face, agreeing that he had penetrated girls with ungloved fingers under the guise of medical exams and treatments between 1998 and 2015.

In a surprise statement to the court, Nassar, 54, said he was pleading guilty to help the community “move forward.”

“I pray the rosary every day for their forgiveness,” he said. “I have no animosity for anyone. I just want healing. It’s time.”

The victims can speak at his sentencing on January 12. Ingham County Circuit Judge Rosemarie Aquilina lashed out at Nassar:

“You used your position of trust that you had in the most vile way, to abuse children,” she said.

She said it could take many years for some victims to heal “while you spend your lifetime behind bars thinking about what you did in taking away their childhood.”

“You were trained as a healer, and what you did was harm them,” the judge added.

Court referring to Larry as DOCTOR Nassar. I AM DISGUSTED. I am very disappointed. He does NOT deserve that. Larry is digusting. Larry is a MONSTER not a doctor.

She has a point. Not only did Nassar admit “to digital penetrating the victims,” but he told the court “that his conduct had no legitimate medical purpose.” He also admitted that the girls did not give him consent.

Nassar worked for the U.S. Olympic team from 1996 to 2015, but fired him that year after concerns came up. MSU fired him in September 2016 when The Indianapolis Star published the accusations.

Jessica Howard, the U.S. National Champion from 1999 to 2001 in rhythmic gymnastics, spoke to 60 Minutes about the abuse:

She recalls one session with Dr. Nassar. “He started massaging me. And– he had asked me not to wear any underwear. And then he just continued to go into more and more intimate places,” she tells LaPook. “I remember thinking something was off but I didn’t feel like I was able to say anything because he was, you know, this very high profile doctor,” says Howard. The girls questioned Nassar’s behavior among themselves. “The girls would say ‘yeah he touches you funny,’” she recalls.

Jeanetter Antolin, a member of the team from 1995 to 2000, claims she had the same experience:

“I remember being uncomfortable because of the area. But– in my mind, I was like, ‘If this helps, I’ll do anything.’” She did not complain. “It was treatment. You don’t complain about treatment,” she tells [Dr. Jonathan] LaPook.

Last week, Raisman told 60 Minutes that Nassar abused her and others and tried to buy their trust with desserts and gifts. From USA Today:

Raisman, the captain of the 2012 and 2016 Olympic teams, told 60 Minutes that she first realized Larry Nassar had abused her after being interviewed by a USA Gymnastics investigator in 2015.

“I was just really innocent. I didn’t really know. You don’t think that of someone, so I trusted him,” Raisman said in the interview with 60 Minutes, which aired Sunday night.

“He would buy me little things, so I really thought he was a nice person,” Raisman said. “I really thought he was looking out for me. That’s why I want to do this interview. I want to talk about it. I want people to know that just because someone is nice to you, and just because everyone is saying they are the best person, it does not make it OK for them to ever make you uncomfortable, ever.”

Raisman did not provide details of the abuse. Her teammate McKayla Maroney also accused Nassar. From CNN:

On her verified Twitter account, Maroney made the allegation under the “#MeToo” hashtag, saying that Nassar abused her under the guise of providing “medically necessary treatment.” That “treatment” began when she was 13, continued during her stellar performance at the 2012 London Olympics and only ended when she left the sport in 2016, Maroney said.

“It seemed whenever and wherever this man could find the chance, I was ‘treated.’ It happened in London before my team and I won the gold medal, and it happened before I won my silver,” she wrote.

The tweet does not exist anymore. The third member of the team to come forward is Gabby Douglas:

Thing is, these girls tried to speak out against Nassar, but those in charge either shamed them or ignored them. In December, former MSU softball player Tiffany Lopez filed a lawsuit against the school and Nassar, accusing him of abusing her more than 10 times between 1998 and 2001 when she sought treatment for chronic back pain:

Three trainers dismissed her concerns, and one of them told Lopez that she should feel grateful to be treated by a world-renowned doctor, Lopez said.

At the end of January, another woman said that she told MSU about the alleged abuse she endured from Nassar. Instead of a proper response, the university allegedly told her to shut her mouth:

A woman says Michigan State’s women’s gymnastics coach downplayed her concerns about treatments by a sports doctor in the late 1990s and warned that a formal complaint about sexual abuse could have major consequences.

The woman says Kathie Klages was her coach when she was a teen in a Michigan State youth program. She says Klages told her to see Nassar about back pain.

The woman says Nassar repeatedly molested her. She says Klages told her she couldn’t imagine anything questionable.

relating this to the Moore accusations –
I commented that if Moore was a predator, akin to this SICK bastard, over a period of 40 years there would be a trail of
similar charges.
doesn’t men that Moore may not be guilty, but it is unlikely.

The silver lining in all this: prisons need doctors. Especially with those aging democrat molesters facing justice.

Larry will not fare well with the boys in the big house.

Boobies! You had to be there.

Warning: do not engages boobies while woman is conscious.

so sad for his family
———————
Arab/Egytian/Palestinian who knows ?

That is jungle law.

Unfortunately … while it sounds like they have legitimate cases against this guy, they’re being drowned out in hyperbole.

Skip the dramatics, please. Tell me what he did, not what you want to dress it up to be. Since nowadays calling a tranny “he” or “she” can—and too often is—condemned as “sexual abuse”, the phrase by itself is meaningless.

“You were trained as a healer, and what you did was harm them,” the judge added.

This is superfluous, and adds a weakness to the claim. Now, to hang a hat on this statement, someone has to argue that actual, verifiable “harm” was involved. And that is something difficult to show, though easy to assume. Poking digits into somatic orifices may be annoying, and it may be illegal, but it’s rarely harmful. The claim of “harm” is unnecessary. Violation of law and of professional ethics is good enough for me; it’s not necessary to turn him into the new Josef Mengele.

This whole story is awash in misleading hyperbole. ” … it does not make it OK for them to ever make you uncomfortable, ever.” Utter twaddle. You don’t haul in to see a doctor to be comfortable. There’s nothing comfortable or even dignified in being poked and prodded and examined by a parade of consultants. And the patient usually has no idea what’s appropriate. I recall a doctor telling me about a patient complaining about a sore back. Doctor asked, “Did you get new shoes recently?” The patient was offended—his back hurts, not his feet. Dumbass doctor. Of course the doctor was right; the change in gait while adjusting to the new shoes was the dumbass patient’s problem all along. I suppose Rule Number One in medicine must be, don’t ask the patient, because he hasn’t a clue.

The abuse problem is real but it has to be addressed in a realistic, unhysterical and non-PC way or it won’t be addressed at all. One doctor/pervert goes to jail, but his “support structure” stays in place, and the problem persists.

Ladies, you know something is wrong when the doctor asks if you want to play producer.

This was my technique when I was a teenager. It never worked but I always told the ladies that they would feel so much better later. I also told them that if I massaged their breasts they would get bigger fast. A couple did fall for that one. However, once I was no longer a stupid kid I gave up on these tried and true techniques. Obviously, this guy didn’t.