The new talking point for anything against the left.

In case you haven’t noticed, the left has a new catch-all talking point. Anything that stands in the way of the progressive agenda is now “white supremacist” or “white nationalist.”

It doesn’t matter if it’s true or not and in most cases it isn’t. But the left is making it clear that this is how they intend to proceed until further notice.

The Trump White House designated November 7th as a national day to remember victims of communism:

100 years after the Bolshevik Revolution, @POTUS recognizes a “National Day for the Victims of #Communism.” https://t.co/aexdA4zNNF pic.twitter.com/zyRcYpvT9G

That triggered a reaction from a BuzzFeed writer who got a little too zealous in his white nationalist accusations.

A BuzzFeed reporter claimed that the phrase “victims of communism” is a talking point for white nationalists over Twitter Tuesday night.

Blake Montgomery, BuzzFeed’s tech and protest reporter, ostensibly made the comment in relation to President Donald Trump making Nov.7 the National Day for Victims of Communism.

“‘Victims of Communism’ is a white nationalist talking point. Trump just made Nov 7 Natl Day for Vics of Communism,” Montgomery tweeted. He has since deleted the tweet. 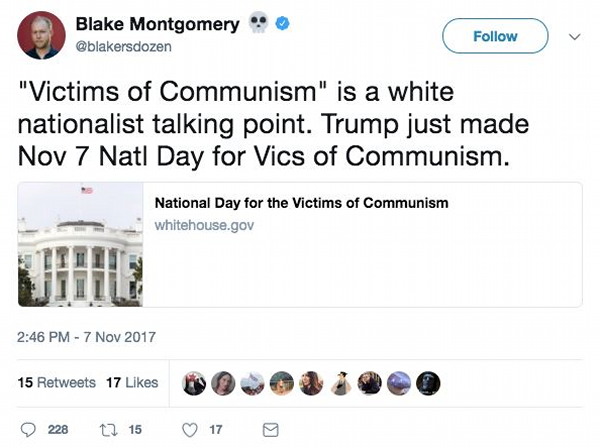 The writer has since apologized:

I didn’t mean in any way to diminish the many real victims of communism, and my tweet was a bad misintrepretation of the president’s declaration. I’ve deleted it 1/

I cover white nationalists, and they use that language a lot, which is why I made that very dumb mistake. 2/2

It’s nice that he said sorry but the mask has slipped. It’s clear to anyone who has been paying attention that the left’s main goal is the destruction of capitalism and the introduction of socialism/communism. I suspect that’s why Mr. Montgomery’s first instinct was to lash out with the “white nationalist” charge.

‘”Victims of Communism” is a white nationalist talking point. ‘ was something this person typed. He typed this. And he didn’t delete it! https://t.co/zES31SbUTv

I don’t know you, Blake, but this unspeakable insult to countless victims of every race and creed ought to ruin your career.#CommunismKills https://t.co/3Nwzi4PRDN

Yeah, remembering the tens of millions of victims in China, Vietnam, Korea, and Cuba is all about white supremacy. https://t.co/J1HBxrhgXx

Um, Communism globally killed Chinese, Cambodians, Cubans, Africans, Vietnamese, and countless others. You need to brush up on history… https://t.co/V12DpaMkDV

Get ready to hear this charge repeatedly between now and election day 2020.

“White Supremacist,” or I guess now “White Nationalist,” is one of those phrases the Left is abusing to the point the term is becoming meaningless, just like they made “racist” and “racism” into nothing more than meaningless shibboleths that say the Lefties don’t like you. “White Supremacist” means you’re slightly to the right of Marx, and you’re fed up with the Democrat Fascists’ shenanigans.

Collectivism is an equal opportunity killer. It never has been concerned about the color of the victims it leaves in their millions.

It’s still at work in various places around the globe, and there are still people suffering and dead directly because of it.

If ever there were two dead old white men, wouldn’t that be Marx and Engels?

Socialism and Communism were invented by white males. It has killed about a hundred million people – mostly non-whites.

And don’t forget fascism, which is just another of the Collectivist cousins.

And the MOST dangerous for Americans, as I’ve often explained.

Dont kid yourself. Non-white Empires have been every bit as vicious as any so called White Empires through history.

In fact, you could make the argument that the only reason so many remnants of previous non-white empires are still around is because they have been protected by various white empires through history!

What an utterly ludicrous and racist statement. Both ideologies have been around since the dawn of man. You need to get out more.

Are you sure about that. Considering that part of Russia is Asia, Stalin might be considered Asian but his birth place does look East of the Urals. Still, Lenin’s father was suppose to be Kalmuck or a mix of Chuvash and Kalmyk which I think came from from Central Asia. I guess Pol Pot was a Europe White too. How about the Yangzhou massacre? White guys again. Hey, it was only 52 K Greeks by the Ottomans. Hey Turks are White men, too. Abdul Hamid was a white guy who almost killed off all the Armenians. And how about all those Tutsis in Rwanda. Yep, white guy there too.

Even if it wasn’t a white guy, the white guys made them do it.

Then again, what people are does not matter right? If I see Marx as a Native American women, hey, you can’t go against my wishes, right. Shoot, Hitler was a black women.

When does the madness stop.

What fools these leftists be.

We must secure the existence of our people and a future for White children.

Now, in the middle of a race war, more necessary than ever.

My people are Americans, and conservatives are concerned with the future of all children.

There is no “race” war only an idea war and you are on the wrong side of it, and perhaps to foolish to realize it. Go back to your lib progressive brethren troll.

“It’s nice that he said sorry but the mask has slipped.”

That is the mask of antifa which uses ‘white nationalist’ and ‘fascist’ interchangeably.

One only needs to scratch the surface at the NY Times (a former newspaper) to find political pr0n gushing on about all the great sex women had in the former Soviet Union (yes, really), and why it was a worker’s paradise of opportunity and productivity.

Or view the leftist tripe vomitted from the Howard Zinn indoctrinated marionettes in hollywood (when they aren’t sexually assaulting one another) to understand that these people are sick and they are dangerous.

They pose an imminent threat to our Constitutional Republic and our life, liberty and pursuit of happiness.

Ummm, wasn’t the first big Communist (Bolshevik) revolution in Russia, home of those people called caucasians? And wasn’t their first really big competitor a very similar group arising out of Germany and calling themselves Aryans?

Why would you blame Jews for Germany in the first place? I’m not tracking that seeing as they were the victims

Marx was Jewish, from lines of Rabbis from both sides, IIRC. Hence, one could, if they were jerks, say that communism is the fault of the jews.
I believe each man or woman is to be judged on their own works and not paint their people with their sins.

Actually I do fear for White children as they are bombarded as being responsible for all the worlds sins form all facets of society, and it has been declared open season on them.
It’s a world wide dilemma that is not going to end well

Thanks for clarifying Sunshine, although I am not as open minded as you as far as the Germans go, they as a collective lost their ever loving minds and the devil walked in. The vast vast majority believed in the mission of their supremacy and the need to eliminate inferior races and religion.

Speaking of thugs, Mugabe’s NORK Trained Fifth Division was full of them.

“…Villagers were rounded and locked up in roundavel thatched huts doused with diesel or petrol and set on fire amid heavily armed soldiers standing guard by the door to shoot and kill those who tried to escape.Some villagers were ordered to dig shallow graves and kneel therein and shot at point blank with AK47 rifles and then their relatives ordered to fill the graves with sand and later ordered to dance on top of those graves with signs showing moving limbs singing shona songs praising President Robert Mugabe. Some were thrown into disused mine shafts while alive…”

Buluwayo was Zulu. Mugabe was Shona.

Tell me about evil white men.

“…Commander,General Constatino Guvheya Chiwenga and Air Marshall Perence Shri, went on to murder more than 40 000 innocent and unarmed Matebele civilians including defenseless old people,pregnant women, children and even unborn children. The unborn had their mother stomachs ripped open with bionnets to kill the innocent child inside. Lactating children were smashed against rocks and other hard surfaces and their weeping mothers ordered to braai parts of the body and eat it…”

Mugabe was eliminating ZAPU/ZIPRA supporters after take over.. Plus settling some very old scores with the Zulus. Plus driving Whites out. Plus laying waste to the former “breadbasket” of Africa. For those that want to get a real fright… watch “Mugabe and the White African.”

Africa , there are no words for that continent. It would be best to let the real animals have it.
Time to build that Ark again God…

I have hunted with the Shona, the Zulu (Matabele is a northern branch) and the Nama. Good people. I can’t write off the entire continent because of Mugabe and his Fifth.

True… but crossing back into South African airspace aboard an SAA flight outbound from Harare is so stress relieving!

True. But I’ve always found the nicest people at Harare.

Felt safer in the bush…. when in the Zambezi Valley.

At Jo’burg it’s possible to but a t-shirt that says, “Rob Mugabe!”

“Before he robs you.”

But there are a whole bunch of people in J that want to rob you also…. and more…

Screw these monsters and their “messaging.”

We should have collectlively stopped them at their transposition of traditional American states as “red states” and leftist leaning states as “blue.”

Do you want to get an argument out of me? I have been rogering up to screw the monsters since Operation Preying Mantis. Just saying I have met Africans who would die for me.

And I would return the favor.

But, that said, Africa is one screwed up continent.

So which is the “crime,” here? Being white? Being a nationalist? Or being a WHITE NATIONALIST?

Reverse your question, and ask it about black people: you’d be called a racist.

This is a racist movement. Period.