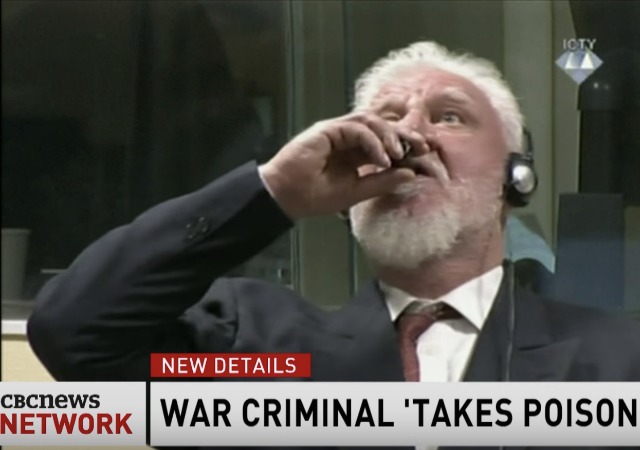 Slobodan Praljak, 72, died in hospital in the Hague after he was seen drinking from a flask or glass as a U.N. judge read out the ruling against him and five other suspects, state TV reported, citing unnamed sources.

The apparent courtroom suicide, which was broadcast on a video feed, came in the final minutes of the last judgement at the International Criminal Tribunal for the Former Yugoslavia (ICTY), which closes next month.

“I just drank poison,” he said. “I am not a war criminal. I oppose this conviction.”

After gulping down the drink, Praljak sat back down and slumped in his chair, a lawyer who was in the courtroom at the time said.

He was one of six former Bosnian Croat leaders found guilty of crimes against humanity and war crimes, including the rape and murder of Bosnian Muslims, in 2013.

The offenses, which date to between 1992 and 1994, came as part of a wider conflict that followed the breakup of the former Yugoslavia in the early 1990s.

The six were accused of trying to “ethnically cleanse” non-Croats from areas of the territory of the Republic of Bosnia and Herzegovina. The Bosnian Croat leadership, along with Croat leaders, wanted to make this territory part of a “Greater Croatia,” the ICTY said when the case first went through the court.

Praljak played an important role in securing weapons and ammunition for the Croatian Defense Council army, according to the original indictment.

That must have been some pretty powerful stuff to kill him within minutes! Hermann Goring took cyanide the night before his sentence was to be carried but to have something like that caught on camera in front of an audience is really wild.