Planned protests prove that Arab opposition to Jewish sovereignty is the root of the conflict.

Today—November 2, 2017—Great Britain, Israel, Zionist Jews across the planet and their supporters, will commemorate and celebrate the 100th anniversary of the Balfour Declaration, a major milestone in the international community’s recognition of the Jewish people’s right to self-determination in the land of Israel.

The Balfour Declaration was a short communique—a mere 67-word note—delivered by then British foreign secretary Arthur James Balfour to Lionel Walter, Lord Rothschild, who represented the British Jewish community at the time.

In it, Balfour expressed sympathy for Zionism—embodied in the commitment of the British government to “view with favour the establishment of a national home for the Jewish people” in the Holy Land. 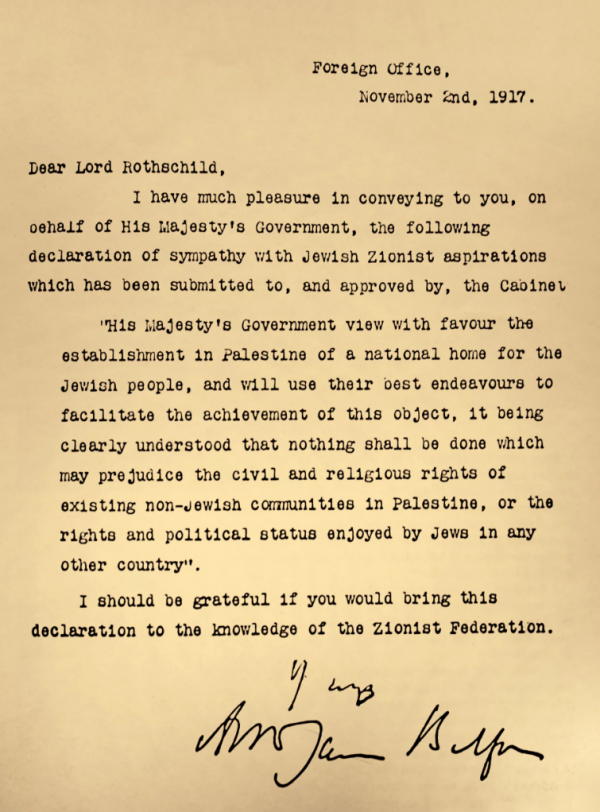 This historic pledge, made a century ago today, that Great Britain would use its “best endeavors to facilitate the achievement” of a Jewish national home has long been viewed by Palestinians and Israel’s detractors as an unjust “calamitous promise”, a “pernicious piece of paper” and an “act of betrayal and perfidy” that imperial Britain foisted on the “indigenous” Arab population of Palestine.

But the reality is that Balfour could’ve never made his government’s promise to the Zionists had the other great powers of the day not approved of it as well.

Why the Balfour Declaration Wasn’t a British Colonial Land Grab

The Balfour Declaration wasn’t merely a letter of British government intent to revive Jewish sovereignty in the Holy Land. It also reflected the consensus decision and coordinated policy of all the Allied powers—including the U.S., France and Russia—to confer legitimacy on the Zionist cause and to “restore Jewish statehood” in the one place on earth where the Jewish people had once been sovereign.

You can watch here several recently released videos that correct the misnomer that Balfour’s public statement of support for Zionism was an example of imperial transgression. In fact, it was—as Lord Rabbi Jonathan Sacks remarks in the video below—the “ultimate anti-imperialist gesture”:

So the Balfour Declaration was “more than the promise of one nation.” As historian Martin Kramer notes in an important recent article revisiting the document, “by affirming the right of any Jew to call Palestine home, it also changed the international status of the Jewish people” (Kramer sees the Balfour Declaration as roughly comparable to a UN Security Council Resolution today).

This wide international support for Zionism helped the movement to evolve from a contested, fringe political group with a “crazy dream of Jewish national rebirth” to one that attracted a large following in world Jewry. Veteran Jerusalem Post correspondent Caroline B. Glick emphasized this crucial legacy of Balfour’s letter in an op-ed this week:

Until Great Britain announced it supported Zionism, the vast majority of Jews thought the national liberation movement was doomed to fail just like all of its messianic predecessors…the Balfour Declaration ignited imaginations and passions of Jews throughout the world. For the first time since the fall of Betar, Jews dispersed throughout the nations dared to believe that the reconstitution of Israel could happen in their lifetimes…It empowered the Jews to change their fate. And it gave license to the nations of the world to support them—if only fleetingly in most cases—and so allowed history to change in a revolutionary way for the Jewish people.”

Within five years of it being issued, the Declaration’s terms were enshrined into international law. It was endorsed after World War I by the Allies at the San Remo Conference; included in the 1920 peace treaty; and incorporated into the League of Nations Mandate for Palestine in 1922. 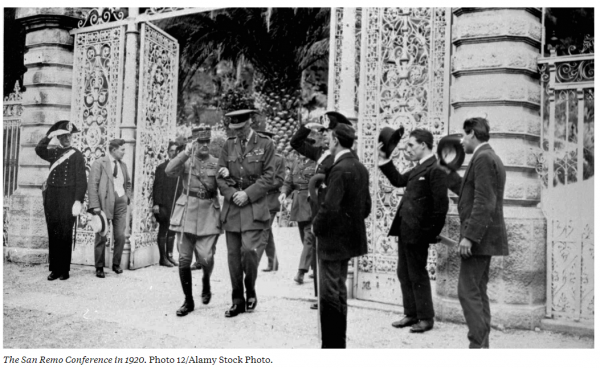 So by becoming part of international law, the Balfour Declaration “helped to secure the legal foundations of the state of Israel.”

Critics of the #BalfourDeclaration present it as a departure from intl consensus and legitimacy. This is false. https://t.co/KEg4gTHaHE pic.twitter.com/lTFsgzUfr8

Indeed, the Balfour Declaration established the terms for Britain’s administration—what was deemed a “sacred trust for civilization”. Reconstituting the Jewish national home by promoting Jewish immigration was a key commitment. This made it difficult for the British to go back on their word, even though successive governments tried during the Mandatory period to water-down the 1917 Balfour pledge in order to appease the Arabs.

3/3 It also became the basis for the League of Nations' 1922 endorsement of Jewish national rights in the land. https://t.co/ldHhXsJTiV pic.twitter.com/Ze7JsTwOTD

As Colonial Secretary in 1923, Winston Churchill partitioned Palestine along the Jordan River and barred Jewish settlement east of it, where Transjordan was created. Then, with each wave of Arab rioting, violence and terrorism—including vicious anti-Jewish pogroms in 1920 and 1929—the British issued new restrictions on Jewish immigration and limitations on the right to purchase land.

A series of proposals were offered to divide and share the land, each of which “whittled down the size of the Jewish home”, but the Arabs refused every one of these compromises. Eventually, the shameful 1939 White Paper completely abrogated the Balfour Declaration, renouncing Zionism and the development of a Jewish national home in the Holy Land and denying the desperate Jews of Europe a safe haven and place of refuge.

But despite all of this British betrayal, backtracking and catering to the Arabs, in the Arab world the Declaration came to be seen as “evidence of Western disregard for Arab rights.”

From the get-go the Arabs emphatically rejected the Declaration’s validity. The anniversary has been marked by Arab protests since the very first one back in 1918. Ten decades later, nothing much has changed except that in the run-up to today’s worldwide centennial celebrations and festivities, the hostility expressed by the chorus of Balfour-haters has been particularly vicious.

In Britain, an anti-Israel group called the Balfour Apology Campaign has been active for months, promoting a film, an online petition, panels and conference and street demonstrations. 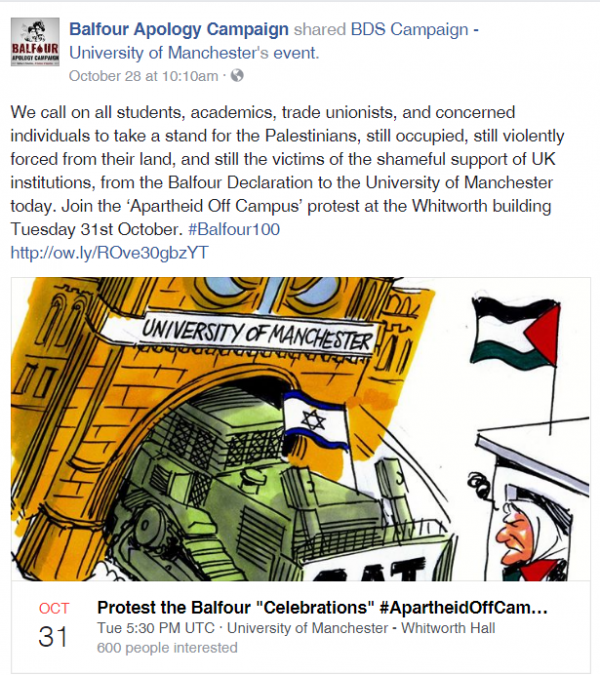 There’s been ugly anti-Balfour advertising, including one for the London transit system which was ultimately banned for failing to meet the transportation system’s guidelines. 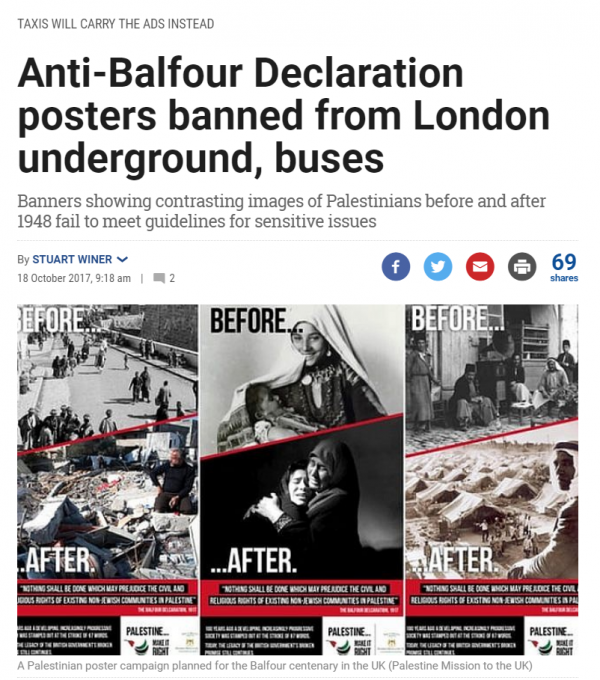 The Palestinian mission to the UK has also been running its own campaign around the centenary in an effort to demonstrate that the “legacy of the British government’s broken promise still continues.”

Online social media campaigns, under the Twitter hashtags #MakeItRight and #NoCelebration, have also been launched in recent weeks. Here are some examples of what virulently anti-Israel social media warriors have been putting online, but hundreds more such posts have been uploaded and shared extensively:

Thanks to all our supporters out today informing #Brighton about the terrible legacy of #BalfourDeclaration for the Palestinian people pic.twitter.com/If5fHqCnkt

? SPREAD THE WORD! ONE WEEK TO GO! ? Let's make this the biggest demo since we marched for Gaza! https://t.co/DWOQ1EyrP8 #Balfour100 pic.twitter.com/fbmTrTIwwx

Mass protests and demonstrations at British embassies all of over the world have been called for by the Palestinian leadership. They’ll take place today and for the rest of the week too in Britain, and across the West Bank and Gaza (some Israeli Arabs are also organizing a protest outside the British embassy in Tel Aviv). 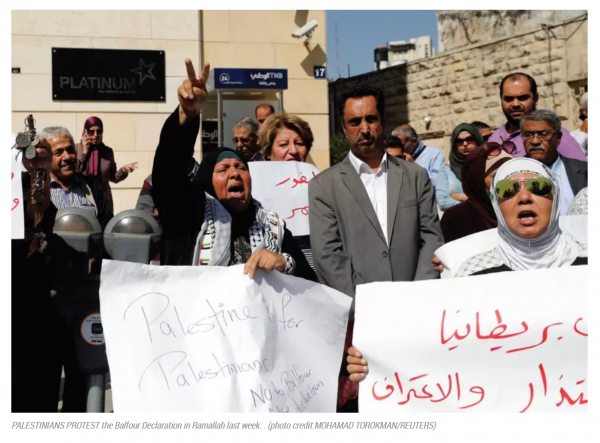 In London, a national march and rally will be staged on Saturday, November 4th by the Palestine Solidarity Campaign and the Stop the War Campaign. 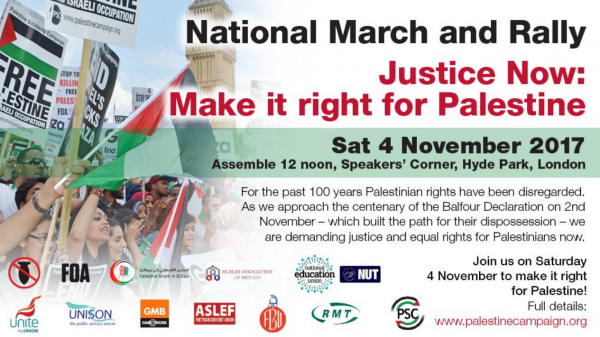 In New York City, eight virulently anti-Israel organizations are co-sponsoring a protest in front of the Israeli embassy today. According to the publicity, the demonstration will denounce “100 years of colonization” and the “continued occupation of Palestine by Israeli Zionist forces”. This “rally against the Balfour Declaration” is also being advertised as a way of condemning the “first step toward the objective of political Zionism.” 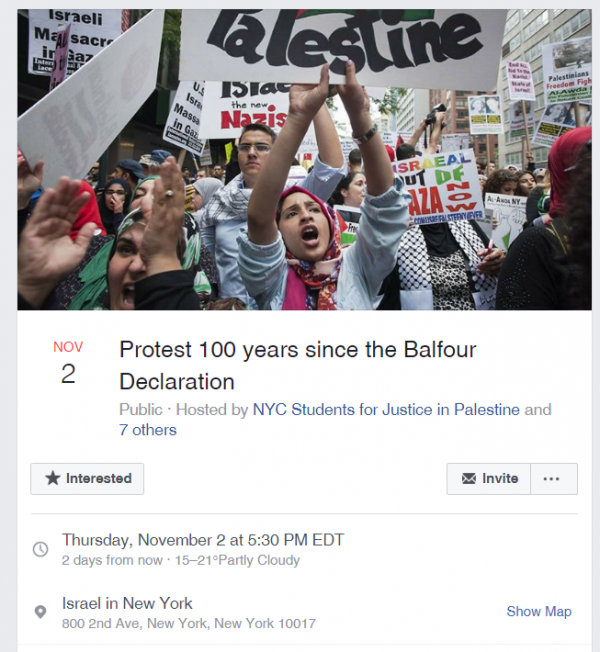 Meanwhile, the Palestinian Authority—Israel’s supposed moderate, mainstream ‘partner for peace’—is still demanding an apology for the Balfour Declaration’s “criminal colonialist project”. This week, PLO officials announced that they haven’t given up on the idea to move forward with a threatened lawsuit against the British government over the Declaration.

What this vitriol against a century-old British document sadly proves is that the post-1967 “occupation” and settlements aren’t the crux of the war against Israel.

David Horovitz, senior editor of The Times of Israel, puts it well:

The Palestinians’ new campaign to highlight the ostensible illegalities and iniquities of the Balfour Declaration…shows an undimmed hostility to the very notion of Jewish sovereignty anywhere in the holy land, and an abiding refusal to accept Jewish legitimacy here…In declaring diplomatic and legal war on the Balfour Declaration, Palestinian leaders are telling the world—to their and our enduring misfortune—that nothing has changed in 100 years, that their opposition to our state in any borders remains greater than their desire for their own independent entity. A century later, they are affirming that their refusal to share any part of this land with the Jewish people remains absolute.”

In a thoughtful post published earlier this week for the pro-Israel website Elder of Ziyon, blogger Daled Amos notes that, despite the received wisdom that the Balfour Declaration “paved the way for the birth of Israel’, the document didn’t actually create a Jewish national home in the Holy Land—because it was already there.

As Amos describes, by the time Lord Balfour sent his note to Lord Rothschild, the Jews had already begun to reconstitute a sovereign state on a land to which they had a 3,000 year history. Enterprising Jews had already established farming communities, cities such as Tel Aviv, Jerusalem, and Safed, and political, educational and social organizational infrastructure. 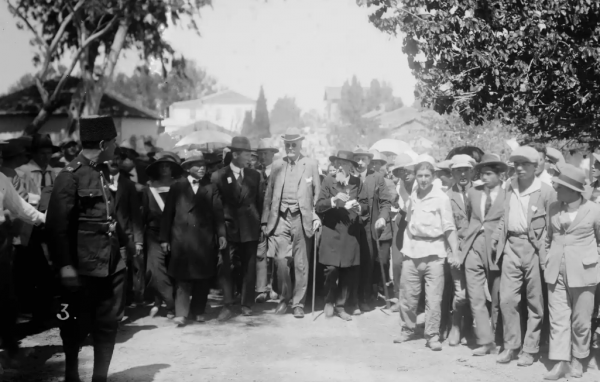 So the Balfour Declaration

was not addressed to a foreign group, giving them permission to enter the land. On the contrary, it was recognition of what Jews—who have an indigenous connection to the land—had already accomplished and would continue to develop.”

It’s a reading of the historic document that Palestinians and the global anti-Israel movement are unlikely to ever accept.

That’s because for the vast majority of Palestinians and many of their supporters, the famous Balfour Declaration “gave people who don’t belong there something that wasn’t theirs.”

That is, from their perspective, Jews are an alien population in the land, and Lord Balfour had no right to invite them in.

Bottom line: the current hostility to the Balfour Declaration Centennial tells us a lot about why the Israeli-Palestinian conflict remains so intractable. It isn’t really about post-1967 settlements or post-1967 borders, but about a very basic and visceral intolerance to Jewish sovereign legitimacy anywhere in the Jewish people’s ancestral homeland.

No end in sight.

it is time to kick muslims/arabs out of Eretz Yisroel and kick muslims out of USA.
the scourge of the world – there is not ONE unique moral teaching in islam that has not been STOLEN from the torah and New Testament = NOT A SINGLE ONE.
the only thing that islam has brought to the world is DEATH and DESTRUCTION, FGM, SLAVERY, POLYGAMY, CHILD BRIDES, BOY SODOMIZATION.
I dare any muslim to challange what i claim.