“Symbols of racism, Civil War secession, and white supremacy should not be forgotten or erased, but they need to be remembered and studied in museums and classrooms, not cheered and applauded in parades” 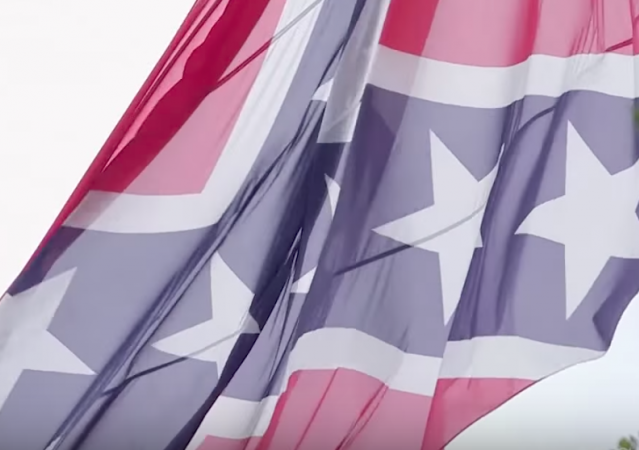 In Austin, Texas, Mayor Steve Adler won’t be marching in Saturday’s Veteran’s Day parade because groups marching in the parade will be carrying the Confederate battle flag.

“Symbols of racism, Civil War secession, and white supremacy should not be forgotten or erased, but they need to be remembered and studied in museums and classrooms, not cheered and applauded in parades,” said Adler.

KHOU has the story:

Adler said in a statement that Veterans Day should only be about honoring United States Miliary Veterans.

“Symbols of racism, Civil War secession, and white supremacy should not be forgotten or erased, but they need to be remembered and studied in museums and classrooms, not cheered and applauded in parades,” Adler said.

In an interview, Adler said, “there are people in our community that feel great pain associated with having the confederate flag in the parade.”

He also added this is a personal decision that was a hard choice to make.

The Austin Veterans Day Parade Committee said in a statement that they understand that “some in our community consider the Confederate battle flag as a negative symbol, and therefore voted unanimously to ban the flag from the parade.”

“We also understand that Mayor Adler met with the veteran Confederate groups and was of the belief that they had worked out a compromise for both of them to participate in the parade,” the committee said in a statement.

However, the mayor’s office said Mayor Adler informed the parade committee of his decision back in September.

In lieu of walking in the parade, Adler will spend the day volunteering at the Central Texas Food Bank which serves a large veteran population.

Editor’s Note: Post title originally read as “Confederate Battle Flag.” That was inaccurate. Groups agreed not to cary the battle flag in this parade. Title has been changed for accuracy.

Move the university to Bandera.

What do you have against Bandera?

Sorry, have to agree with the Austinite on this one. A Confederate battle flag would be entirely appropriate if any veterans who fought for the Confederacy were marching in the parade. Although pensions were still being paid to widows of Civil War veterans until about a dozen years ago, the last Confederate veteran has been dead for nearly seventy years. And the last excuse for parading around with his flag died with him.

Let’s show a little class, folks, and give it a goddamn rest. Not much class, just a little. Shouldn’t be too much of a strain.

You just now reminded me of a southern friend. My dad was transferred to Barksdale in Shreveport Louisiana. A friend from school was 100% southern. His family called me Yankee. But they were joking. Gary would put on the voice of an old southerner and shaking his fist he’d say, “The north will r-i-i-i-i-i-i-i-i-i-i-s-e again!” … No, wait.

I just now saw a show on travel in Italy. The young people walk the streets to see and be seen. On certain streets they are very fashionable. A young woman passed by wearing a jacket with the confederate flag pattern sewn into the back. And I wondered, do they even know what that particular pattern means? There are several similar flags, but this stars and bars is specific. (My eyes go directly to the center star to check and see if they have it right side up. Sometimes it’s displayed upside down. The way to tell is the tips of the stars. Five-pointed, a single point must point upward.)

Naw, he was just looking for an excuse. BTW, didn’t Congress decide that Confederate soldier were veterans as well back in the late 1800s?

Good. One less a-hole in attendance.

For decades after the war, both sides met at reunion encampments where veterans became fast friends and healed each other.

They could do that. I wonder why people who were never near any of the war cannot?

Lincoln wanted to let the South “up easy”… consider the present scorched earth policy of eradicating anything Confederate..this is Reconstruction II.

The Confederacy were traitors and they lost. Should never have been monuments to them in the first place.

History is big and confusing. If only there was one right history for everyone to know.

But the definition of treason that encompasses the Confederacy also includes obama and hillary clinton and most university professors in the US.

The only way you can get to “treason” on the part of individuals who fought for the Confederacy is to apply modern norms and definitions on them.

EVERY state that entered the Union on adoption of the Constitution was a sovereign. That’s just an historical FACT.

This was still true in the Civil War era. A Virginian owed his/her first duty to Virginia, their sovereign, not the United States. They were not only NOT “treasonous”, they were following the law and norms of the time.

It was only AFTER the Civil War that the term “the United States” came into coinage. PRIOR to that, they were states united under the constitution.

NONE of the individual states would have considered giving up their sovereignty to adopt the Constitution.

you are right and the US military post civil war permitted and encouraged Southerners to join especially since we were still expanding in the west and needed combat veterans.

Correctamundo! At the beginning of the war Lincoln talked of the “Union” but as the War continued he switched to “Nation”… a departure in meaning!

Thank you for telling the truth about this period. Most people today think the Civil War was about slavery but it wasn’t. Lincoln himself would have allowed slavery to continue to preserve the Union. The rebel flag was never about slavery or white supremacy. It was adopted later in the war as a common rallying flag. I would estimate that less than 5% of the population of the South owned a slave. That would equate to owning a very nice pleasure boat today as to the value. I grew up in the South and the rebel flag to me has never meant anything except pride in my ancestor’s desire to defend their state and way of life. This symbol has been so badly mischaracterized that it is now looked on by the uninformed as equal to the Nazi flag.Unfortunately for most people, Hollywood and TV programs are the way they learn of this tragic period in our history. Can you think of any subject, that was real event, that they have done correctly? The Vietnam war which I was part of recently is a good example where the bias of Ken Burns showed throughout the entire documentary.

There’s an interesting vignette regarding Charles Fremont, who commanded the Union armies of the West. He came to conclude that slavery in his area of responsibility enabled Confederates to fight. He therefore issued an Emancipation Proclamation for his area.

Lincoln was horrified, believing that the move would REALLY inflame the enemy, and immediately reversed Fremont.

While your statement that citizens of the states which comprised the Confederate States of America were traitors to the United states of America is inaccurate, it has been universally taught as fact in primary education since the 1860s, in this country. Most people actually accept it as being truth.

However, as others have noted, the member states of the USA were under no obligation to remain part of the Union. There was nothing then nor today, in the Constitution, which prohibited withdrawal from the Union. So, no treason there.

And, finally, the myth that the Civil War was fought over slavery. This is proven false by the fact that four Union states allowed the legal holding of slaves until the latter part of 1864, four years after the outbreak of the war. The issue of slavery was one of the issues which led up to the Secession, but it was nowhere near the reason that the war was fought. The South fought because it was illegally invaded by the North. The North invaded the South because federalists wanted to wipe out state sovereignty and forestall future secession of member states in order to maintain the Union. Once you allow individual states to leave, then states will just keep doing that, until there is no Union left. The US government wanted to impose a form of slavery upon its member states, which it accomplished. As a symbol of a state’s independence, the Rebel flag is as much a symbol against slavery as it is a symbol of slavery.