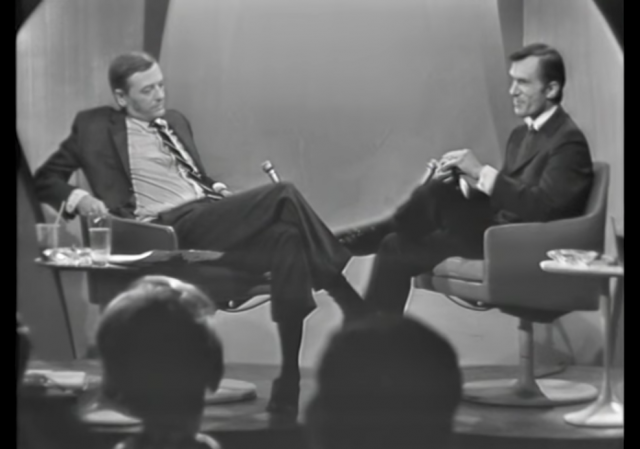 The obits that followed were almost as disgusting as Hefner.

Douthat at the NYT:

Needless to say the obituaries for Hefner, even if they acknowledge the seaminess, have been full of encomia for his great deeds: Hef the vanquisher of puritanism, Hef the political progressive, Hef the great businessman and all the rest. There are even conservative appreciations, arguing that for all his faults Hef was an entrepreneur who appreciated the finer things in life and celebrated la différence.

What a lot of garbage. Sure, Hefner supported some good causes and published some good writers. But his good deeds and aesthetic aspirations were ultimately incidental to his legacy — a gloss over his flesh-peddling, smeared like Vaseline on a pornographer’s lens. The things that were distinctively Hefnerian, that made him influential and important, were all rotten, and to the extent they were part of stories that people tend to celebrate, they showed the rot in larger things as well.

His success as a businessman showed the rotten side of capitalism — the side that exploits appetites for money, that feeds leech-like on our vices, that dissolves family and religion while promising that consumption will fill the void they leave behind.

The social liberalism he championed was the rotten and self-interested sort, a liberalism of male and upper-class privilege, in which the strong and beautiful and rich take their pleasure at the expense of the vulnerable and poor and not-yet-born.

Hefner was no feminist, nor did he expedite the sexual liberation. Quite the contrary. He was a quintessential pervy old man who sought to normalize (to use present day jargon) immediate gratification.

Forgoing self control, discipline, and other norms that protect the family unit, Hefner contended without any more than supposition that an increase in premarital sex would inevitably lead to stronger monogamous bonds during marriage.

In his 1966 appearance on Firing Line with William F. Buckley Jr., Hefner looked a fool, haphazardly tossing around “per se”, misunderstanding the origins of church and state, misrepresenting Freudian theory, and ignorantly arguing that the marriage of church and state was responsible for much of history’s chaos as a means to justify what Buckley referred to as the “Playboy Philosophy.”

But Hefner’s argument that casting down societal norms and in particular, religious traditionalism in favor of the sexual revolution which actively mocked these values met its unfair match with Buckley.

After thirty minutes of suggesting the Playboy Philosophy is ultimately beneficial to “happy” monogamous society, Buckley asked, “How do you know?”

Hefner’s “philosophy” was little more than an undisciplined flesh-promoting self-adventure, which rather than keep to himself, he chose to leverage for personal gain. His own misgivings and struggles with religious traditionalism resulted in a “new legalism” he railed against.

’nuff said. To say anything more would be superfluous.

It seems as though Hef’s smirking visage has been leering from somewhere behind my back for my entire life.

I do not find Hefner so bad as those who glorify Hefner. Hefner always seemed profoundly unhappy to me.

As a publisher he paid writers and contributors on time and top rates. So that is a positive about him.

When the Playboy became a deer in the headlights. Stumbling over his words, trying to elevate his argument to Buckleyesque levels and failing.

I’m no big fan of H.H., but I’m even less of a fan of Douthat. In any case, I wouldn’t put too much weight on Hef looking bad under grilling by Buckley.

I saw a debate between Buckley and Saint Ronald Reagan from ‘way back in the era when Russian missiles in Cuba were still a fairly hot topic. Buckley’s performance was classic debate style, attacking Reagan from an unexpected direction … the far right. As pure polemics, it was brilliant, and Reagan was left reeling from the knockout blow, completely unmoored, adrift, befuddled, and helpless; he didn’t even seem to realize what had just happened. It was embarrassing to see anyone so easily outmaneuvered and thrashed. But it was pure debate tactics; Buckley didn’t obviously have a firmer grasp of geopolitics than Reagan, he was just far quicker on his rhetorical feet. And I’m not surprised that Buckley could run rings around Hefner as well. Certainly Hef was not the enfant terrible he imagined himself to be, but then again, few of us are. He still has his place in the pantheon of American commerce and innovation, somewhere up there between Henry Ford and P.T. Barnum. Not the place some think, and certainly not the place Hefner himself had picked out, but it’s there, somewhere.

I was a big WFB and Firing Line fan. I was a kid watching that I thought he was great.

But I concur that Hefner has a place in history as you describe. He was less a cultural force than just a guy who was in the right place at the right time and understood how to market himself and his brand. Eventually it stopped working so well.

I found CNN freaking out about a guest saying boob then a few days later running Hef’s death 24/7 to promote ratings revealing. There are a lot of hypocritical boobs at CNN (not the female breast ones).

Did you by any chance mean “deification”?

Her use is apt.

It can be obsevered Hefner has returned to the dust from which he came, so ‘dirty’ is a very apt use too.

Will the print magazine last to the end of the year?

Hmmm. That would be a center fold I would like to see.

Heffner looks like he was doing some amphetamines. Perhaps with his friend Lennie Bruce.