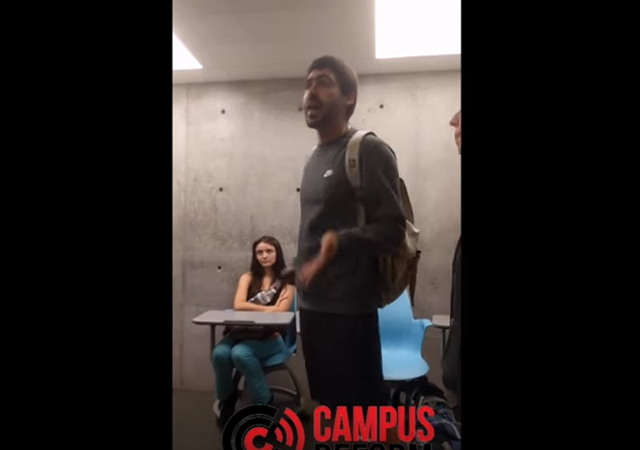 The left is still pushing the false narrative of fascism and white supremacy. It won’t help them win anything.

A College Republicans meeting at the University of California, Santa Cruz was taken over by protesters screaming that the group’s existence is a threat to the safety of students.

Shortly after the CR meeting convened, one student entered the ground floor room of McHenry Library to ask attendees which group was assembling. After being informed that the meeting was a gathering of College Republicans, the student returned about 15-20 minutes later with company.

One of the ringleaders of the protest was student activist Haik Adamian, who posted an announcement in the official UCSC Student Facebook group calling on students to deny the CR group its First Amendment rights.

“White Supremacist, fascist sympathizing College Republicans are having a meeting at McHenry library, room 0332. Everybody be aware of this violent racist activity happening everyday on this campus!” he wrote, adding that “We need a movement of people on this campus that rejects the ‘right of assembly,’ or ‘right of free speech’ for white supremacists and fascists.”

That is one way to get the morons into a library, but can they read?

Why why why do we pander to these kids’ mental disorders. Crazy

“It won’t help them win anything.” … Not true. Look at California. The tactic works. There is no shortage of people across the nation that will buy into this BS.

I pray the CRs file a grievance with the UCSC Admin to protect their rights as student and citizens, and that the protestors get sanctioned or even expelled, as they should be. We can’t be pacifists in the face of a violent threats.