“Underwear Bomber” Sues Government Over His Treatment in Prison

“Underwear Bomber” Sues Government Over His Treatment in Prison

Terrorist attempted to blow up an airliner on Christmas Day 2009 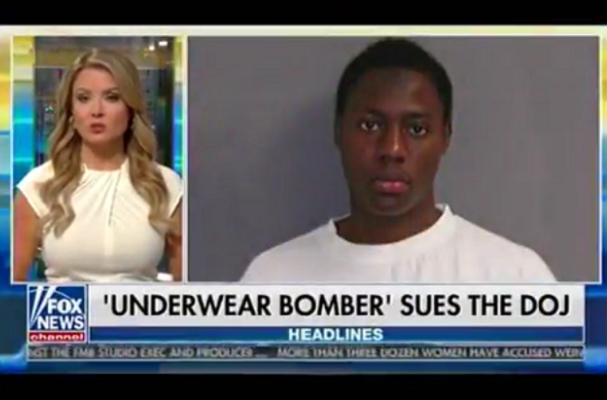 The inept terrorist who attempted to ignite a device in his underwear while on a Northwest Airlines flight on Christmas Day 2009 is suing the DOJ for assorted instances of poor treatment.

The Nigerian man known as the “Underwear Bomber” sued the Federal Bureau of Prisons and Attorney General Jeff Sessions Wednesday in federal court in Denver, alleging his constitutional rights are being violated at the ADX supermax prison in Florence, Colorado.

The lawsuit, filed in U.S. District Court of Colorado, alleges that Umar Farouk Abdulmutallab has been forced into solitary confinement for an undetermined amount of time, that he’s been chastised by other prisoners and guards for being Muslim, and that he’s been force-fed non-halal food when he went on hunger strikes to protest his alleged mistreatment.

. . . .  The lawsuit alleges that once Abdulmutallab got to ADX in Colorado, he was immediately placed in long-term solitary confinement and placed under special administrative measures (SAMs) that prohibited his communication with most of his family members up until last year, when he was allowed to talk to his sister.

The lawsuit says he’s still not allowed to talk to any of his nieces or nephews.

It says of 154,000 people incarcerated by the Bureau of Prisons, Abdulmutallab is among less than 30 who have special administrative measures, and alleges that he shouldn’t be placed under the restrictions because his communications don’t risk “death or serious bodily injury to persons” or property, which is a requirement of the SAMs.

“Prison walls do not form a barrier separating prison inmates from the protections of the United States Constitution,” the suit says.

It says the restrictions constitute “an unconstitutional deprivation” of his First Amendment rights to free speech and association.

Seriously, why is this guy still alive? Two cartons of cigs to one of the lifers in there should put paid to this @$$h0!e

That would make you a murderer, just like he attempted to be.

The man attempted to murder over 289 people. He was a murderer in his head when he mixed his explosives. He should have been executed for that alone. He is also a member of Al-Qaeda, and therefore a guerrilla who could be executed out of hand.

The fact he failed makes him an incompetent murderer.

He freely admitted to the attempted murders. Given the opportunity he would kill you even as he took his last breath. Would you EVER believe him if he repented? Rejoice as he was granted parole? Be happy if he moved right next door to you? You’re not so foolish

I’m a bit unclear on this: this jihadist is a Nigeria citizen, claiming violation of his U.S. Constitutional rights, in prison for his part in a (thankfully unsuccessful) attempt to murder nearly 300 U.S. citizens in transit home from Europe . How does this foreigner figure he has any Constitutional rights at all?

He is a person in the USA. Therefore he has the same constitutional rights that you do. This isn’t even a question. The constitution makes no distinction between citizens and aliens, nor between criminals and decent people.

His criminal sentence means the state has the right to confine him, and to subject him to such regulations as are rationally related to a legitimate penological objective. It does not deprive him of any right that is not inherently incompatible with his sentence.

I hate the fact that you are right about this…

The underwear bomber crying about his treatment in prison which includes being forcefed non-halal food? The snark-o-meter is going bonkers, but out of respect for some of the more sensitive folks in here I’ll refrain.

The non-halal food part got me. Fine, let him eat vegan. No possibility of haram meat or other animal products.