This is what the left believes. 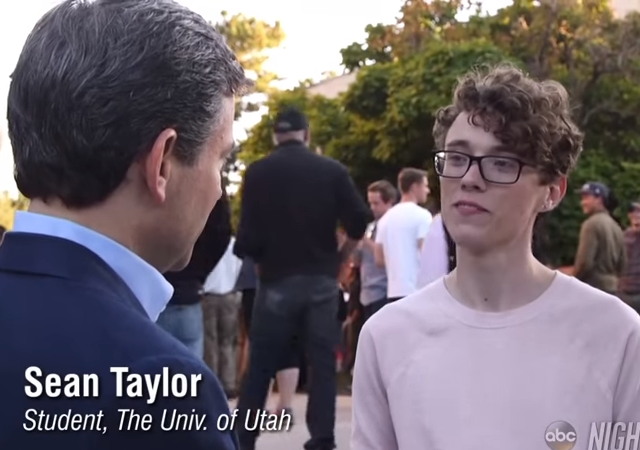 One of the organizers of the protest against Ben Shapiro at the University of Utah really let the mask slip.

Earlier this month, when Daily Wire editor-in-chief Ben Shapiro went to the University of Utah to deliver a speech, he was greeted by a mob of leftist student protesters demanding that he not be allowed to speak. Dan Harris of ABC’s Nightline was also there to film a segment with Shapiro, which aired on Friday. Harris also interviewed students and faculty at the University of Utah about Shapiro’s speech.

In one of the most stunning and infuriating displays ever of honest, unashamed progressivism, the leader of the student organization opposing Shapiro’s First Amendment right to speak, Sean Taylor, outright states that Ben Shapiro should not have the right to speech and that the Constitution is not a “relevant” document.

Is there something surprising about this? Is it that he forgot to pretend to respect the Constitution?

I can understand why they would believe the constitution is “not relevant”. They have spent a lot of their lives with a regime that had no respect for that founding document. This is resulting from many years of that document being ignored by the failed legal guild.

As Progressives, their aim is to take down and destroy the great American Experiment as they believe it impedes the inevitable progression (thus their name) from Capitalism to Socialism to the end result Communism. Any part of the Constitution that assists them will be used to further their goal, but only as long as it remains useful in dismantling US government and society.

Scary..
Pink flamingo thinks the constitution doesn’t matter…. That is til the pink & flamingo go up in ‘flames’ itself… History is rife w them.. Ask Russians, Chinese, Vietnamese, etc…

What is really frightening to me – terrifying, actually – is that these young know-nothings are going to be in charge soon … and when that happens, the Constitution may truly become irrelevant. And on that day the country of my birth, the one that for 22 years held my blank check for an amount up to and including my life, will cease to exist. The corpse might twitch along zombie-like for a few more years, but it will not be the same country.

And the world will have lost something unique and precious and will, sadly, not see its like again.

He looks like he is related to Pajama Boy.