17 people are reported dead, and the death toll is expected to climb. 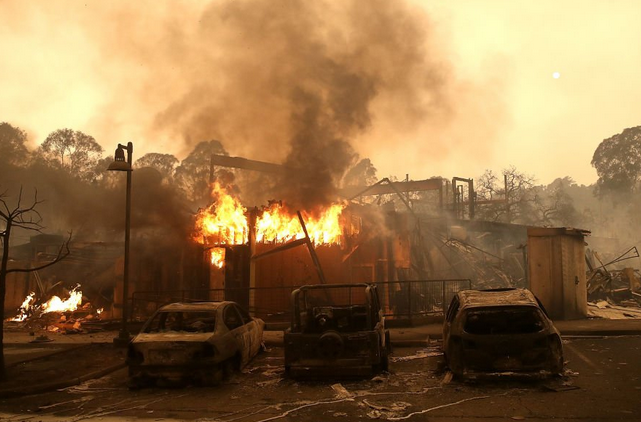 How bad are California’s 2017 wildfires?

The devastation is so bad that President Donald Trump and state politicians seemed to have called a temporary truce on their legal battling.

President Donald Trump says the federal government will be there for the people of California as devastating wildfires sweep across the state’s famed wine country.

Trump says he spoke Monday night with California Gov. Jerry Brown to “let him know that the federal government will stand with the people of California.

And we will be there for you in this time of terrible tragedy and need.”

In fact, President Trump has approved a “major disaster declaration” for California to assist with the response to the fires that have scorched the state famous wine county. It’s being reported that 17 have died in the blazes and nearly 200 people are still missing.

The 17 large wildfires that have burned more than 115,000 acres in California since Sunday have now been blamed for at least 17 deaths. The fast-moving blazes have destroyed at least 2,000 buildings, many of them in the wine country region of Napa, Sonoma and Mendocino counties.

At least nine people were killed in Sonoma County in fire-related incidents, and fire officials indicate the official death toll will likely climb. Cal Fire also confirmed that three people had been killed in Mendocino County, two people in Napa County, and one perished in Yuba County.

Mark Ghilarducci, director of the state Office of Emergency Services, agreed Monday that other deaths were likely across the region. Since the fires were moving so rapidly, he added, authorities were “still trying to get our hands around” the full extent of the damage and casualties.

Cal Fire Director Ken Pimlott said that many other people had been injured and that an undetermined number were missing.

One heartbreaking story involves an elderly couple, aged 100 and 98, who died together when the wildfire struck their home.

World War II veteran and his wife are among those killed by wildfires raging across northern California.

Mike Rippey said Tuesday his 100-year-old father, Charles, and 98-year-old mother, Sara, grew up in a small town in Wisconsin and went to college in the state together. The couple celebrated their 75th wedding anniversary last year.

…Mike Rippey told the Associated Press his mother didn’t move well, and his parents were unable to get out before the blaze destroyed their home. His brother said despite intense heat and heavy smoke in the house, not to mention his father’s need for a walker, Charles Rippey nearly made it to his wife’s side. That’s where Chuck Rippey found their bodies on Monday.

One person who has had a real run of bad luck is Dr. Richard Murray, University of Houston Political Science Professor. While he was dealing with flood damage at his Texas residence, his wife (Debbie Hartman) and her elderly mother were staying at the family’s Napa Valley home.

[E]arly Monday morning, they were forced to evacuate because of the fast moving wildfires.

“I ran around gathering up mostly my mom’s medicine and medical equipment and my neighbors were helpful and we had to caravan out,” said Hartman, who owns a small public relations firm in Houston.

Speaking to Eyewitness News via Facetime, Hartman says she is currently staying on a friend’s couch in nearby Yountville, and does not know if their Napa house survived.

Meanwhile, in Southern California, the fire in Anaheim Hills is contained to the point evacuations orders in Anaheim and Tustin have been lifted. Prayers are being said that our compatriots in Northern California can soon do the same.

Napa wines are over rated… other areas in #Failifornia make better, w/o the pretension OR the prices.

and NO, i’m not saying where: we’re stocking up before demand drives up *their* prices… 😎

Indeed! The wines of Temecula are superb!

everyone buy up Temecula wines!!!

Here in NC, I was at the supermarket yesterday and stumbled across a bottle of 2014 Wild Horse Merlot from Paso Robles. It was in the “discount” cart and marked down to $17 so I snatched that sucker right up! I’ll save it for a special occasion…maybe for when the NFL files bankruptcy.

this could get expensive for PG&E, its stockholders AND its ratepayers

Only in Kalifornia do people want to sue the utility company for an Act of God (75 MPH winds). Good thinking, comrades.

Yeah…Remember way back in 2011 when Obama played politics and wouldn’t send help to Texas for fires going on there???? http://www.dallasblog.com/201105041008034/dallas-blog/obama-refuses-to-help-texas-wildfire-victims.html

I’m starting to think these fires were intentionally set by some domestic terrorist group like antifa or some other group.

There were some 17 fires that broke out nearly simultaneously. I don’t believe for one second, that this was due to winds knocking down power lines. They would never tell us that these fires were intentionally set. Could you imagine what that would do to the California wine industry? It’s meant to make the feds give extra money to CA.

Why is President Trump promising help?