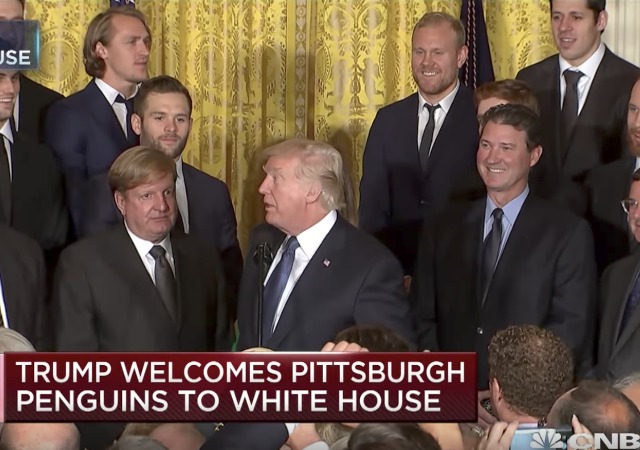 The left went CRAZY on social media and one outlet even downplayed the tradition of visiting the White House.

When the Penguins announced last month that they planned to go to the White House, they offered explanations. From SB Nation:

“We respect the office of the president and the White House, and the history and tradition of the championship team getting invited to the White House,” coach Mike Sullivan said last month, via the Pittsburgh Post-Gazette.

“I think it’s more about the fact that we won the championship, and it’s tradition to go to the White House,” forward Conor Sheary said recently, via the Pittsburgh Tribune-Review. “It has nothing to do with who’s the president or what decisions he’s making.”

Satchel Price at SB Nation claimed in his article that the Penguins are overstating the “tradition” of visiting the White House. According to him, since the practice really only started in 1991, it’s not really a tradition and the Penguins are using it as an excuse to avoid their racist reality:

An NBA champion was invited to the White House two decades before an NHL champion, yet that tradition didn’t stop Stephen Curry and the Warriors from speaking out against going (with Trump pulling his invitation to them afterwards). The NHL may have other reasons for its attempts at political neutrality — namely, it’s a league comprised primarily of wealthy, white men who aren’t impacted in the same way by the issues being protested in the NFL — but in wake of the collision between Trump and activism by athletes, that’s an uphill climb.

The Penguins keep saying their decision to go is apolitical, and they operate in a world where many of their fans may view it that way. To them, this isn’t about fighting police brutality or racial injustice, it’s just about respecting tradition. “It’s not about politics, that’s for sure,” Sidney Crosby said recently.

But others took to Twitter to lash out at the Penguins:

He just told his VP to walk out on a Colts game, and he’s attacking Jemele Hill again. Enjoy that apolitical White House visit, Penguins. https://t.co/Mzyo8sPDDl

The Penguins spending the entire White House visit looking ashamed to be there is all the proof you need of why they shouldn’t have gone.

My response to Jeff:

Or maybe it’s b/c everyone has attacked them, making it about politics & hatred of the president & not their victory. Just a thought. https://t.co/EuIOcY6vdt

Or maybe it’s b/c everyone has attacked them, making it about politics & hatred of the president & not their victory. Just a thought. https://t.co/EuIOcY6vdt

Sid was also raised to believe that by repeating an inherently incorrect thing enough times, you will it into truth. https://t.co/l1AzOU3cmN https://t.co/dHNm1GjPNz

If one of the @penguins body checked Trump- to show him hockey moves, of course- that would have been blissful.

Funny how all of the people criticizing this are people who would never go to a hockey game, no matter the team, even if they were paid. Oh yeah, they care about the sport.

Pretty soon I hope Trump will pivot in the culture war to the ongoing campus free speech fight. If a major blow up can occur at Berkeley or some other institution of higher indoctrination, he should take advantage and pound the subject with both fists. That is long over due. Administrators, faculty, donors and tax payers will be put on the carpet.

Trump would be best served by cutting all federal funds from colleges. Let the free market take its course.

Let’s all just enjoy the frustration and emotional turmoil that these nuts have had to suffer day after day since Trump got elected. They have a strange, psychotic need to think that everyone either thinks what they do or is forced to bow to them in some way, but every day they are forced to acknowledge the true resistance, the resistance to leftist emotivism, because Trump is in the White House.

Looking at all those smiling, happy faces I don’t think these clowns use of the word ashamed means what they think it means HAHAHAHAHHA

I went to a political fight and a hockey team broke out.

Poor guy’s just a garden-variety racist … but pretends to be a Marxist.

But he’s misidentified the problem there. The day’s issue isn’t racism or Marxist, it’s sartorialism. Those gentlemen look seriously uncomfortable in ties.

Between this and the recent departure from the “Clean Power” executive overreach, Pennsylvania would appear to be safe for President Trump in ’20.

I have a contrarian view of all this. The White House is not a royal palace. Why do we have to have all these sports teams go there? I’d be happier if the president spent all his time being the chief executive and not doing semi-royal photo sessions. President Trump at least is spending a great deal more time working on governing than Obama did.

Contrarian for sure… and a tad cynical. IDK, they’ve been done for so long, I dont’ see the point in stopping now. It is a great opportunity for these teams and their families to visit, look around and get some exposure. It should be a honor. It is actually an honor. Trump isn’t having weekly Hip Hop concerts or anything. It didn’t used to be political. Sadly, since 2000, everything has been increasingly hyper political… and good thing too b/c that’s how we got Trump! MAGA!

But the idea is not to elect presidents who host rap concerts featuring obscene and misogynist “artists” at the White House.

The ‘jimmy carter’ lesson apparently did not leave a painful enough scar to ovecome the corrupt democrat media. Thus, the nation must endure the long-lasting misery of the ‘obama’ lesson.

Hopefully, the democrat media will not be as successful in the future in being the arbiters of history, nor creating fake news – or political candidates.

These are the PITTSBURGH Penguins. I don’t see too much backlash from their fans at home over this.

Also, people have to understand that the President is not honoring the team personally [though he may have personal reasons for doing so], but as the elected representative of the United States of America. When a championship sports team is honored at the WH by the President, it is really being honored by the People of the United States of America.

They may be able to lead NFL gangbangers around by the nose, but obviously not hockey players.