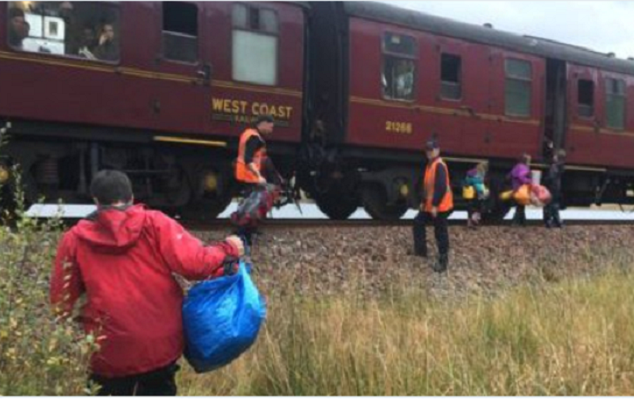 A family of six were enjoying an outing in Scotland when their canoe was swept away, leaving them stranded.  Unsure what to do, they called for assistance and were told that the Hogwarts Express was on its way to rescue them.

The train used in the Harry Potter films is actually called the Jacobite, but I suspect the children—ages 6, 8, 10, and 12—were excited to recognize the Hogwarts Express.

A family stranded in the Scottish Highlands have been rescued by the “Hogwarts Express” steam train.

Jon and Helen Cluett and their four young children were staying at a remote bothy in Lochaber when their canoe was swept away by a swollen river.

Facing a long walk back to their car across boggy land, they phoned the police for advice.

To their delight, they arranged for the steam train used in the Harry Potter films to pick them up.

The train, called The Jacobite, is used for excursions on the West Highland Railway Line, crossing the iconic Glenfinnan Viaduct that also features in the movies.

The Cluetts and their children – aged six, eight, 10 and 12 – were enjoying a half-term break at the Essan bothy, on the south shore of Loch Eilt.

. . . .  The family hurriedly packed up their belongings and made their way to the line, about 400 metres way.

“We threw all our stuff into some bags and boxes and ran out of the door of the bothy at the same time as the train is coming around the tracks,’ said Mr Cluett.

“The train is getting closer, we’re running down, stuff bouncing everywhere, big smiles on the kids faces. It all started to be fun at that point.

“I’m slightly sad because I’d lost my boat – but the kids, when they saw the steam train coming, all sadness left their little faces and was replaced by excitement and fun – just the real joy of having an adventure and having the train stop right next to them.”

The family were dropped off at the next stop, at Lochailort, from where Mr Cluett was able to hitch a lift to retrieve his car.