The response is what you’d expect 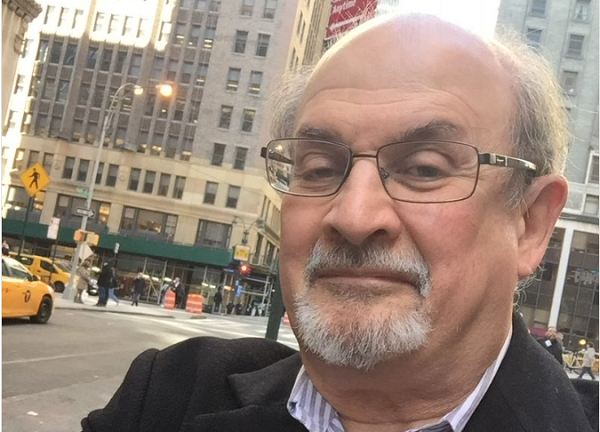 In this novel, Rushdie reportedly tackles the left’s reckless push for younger and younger children to undergo sex change treatments, even surgery.  He does not approve.

Rushdie, it should be noted, was not only anti-Trump during last year’s presidential election but a proud #ImWithHer fanatic.

He is not, in other words, someone one might expect to be concerned about the leftist push for maiming children in the name of LGBTQ politics.

Rushdie points out that gender-reassignment surgery is an unnecessarily extreme response to a little boy who likes to play with dolls or wear pink.

The 70-year-old writer says he ‘worries’ how children are being affected by more liberal attitudes to gender-reassignment procedures.

He adds: ‘I have quite strong views about the over-insistence on these issues, particularly when you get down to very young people.

. . . .  ‘Because, to put it crudely, if there’s a boy who likes playing with dolls and wearing pink shirts it shouldn’t necessarily mean that he has to have gender-reassignment surgery.

‘Until quite recently that would never have occurred to anyone, so I think we maybe need to just back off a little bit.’

However, Rushdie insisted he did not want to be ‘stupidly judgmental’ about the issue, which he tackles in his new novel The Golden House.

While Rushdie may not have intended to be “stupidly judgmental,” it appears that the lefties who’ve heard this are being exactly that.

Salman Rushdie talking about gender identity on #Newsnight. Stay off topics you don't have any idea of, mate.

A common theme amongst those lashing out at Rushdie over this topic is that sex change surgery does not happen on children.

.@SalmanRushdie Trans kids don't get surgery. Please speak with trans families before popping off to the press in ways that harm us.

While there is some truth to this (in the U. S., sex change surgery is reportedly not performed on those under 18, though breast removals have been performed on girls as young as 16), the point Rushdie is making is completely lost on these people.

Pumping children (pre-puberty) full of hormones to “delay” or “pause” puberty is a bad idea.  The “effects of which can be irreversible and may lead to a loss of fertility.”  This pause is intended to make later surgery easier on the person. Furthermore, the child’s mental well-being is also at issue.

The Wall Street Journal reported in 2014:

Then there is the subgroup of very young, often prepubescent children who notice distinct sex roles in the culture and, exploring how they fit in, begin imitating the opposite sex. Misguided doctors at medical centers including Boston’s Children’s Hospital have begun trying to treat this behavior by administering puberty-delaying hormones to render later sex-change surgeries less onerous—even though the drugs stunt the children’s growth and risk causing sterility. Given that close to 80% of such children would abandon their confusion and grow naturally into adult life if untreated, these medical interventions come close to child abuse. A better way to help these children: with devoted parenting.

At the heart of the problem is confusion over the nature of the transgendered. “Sex change” is biologically impossible. People who undergo sex-reassignment surgery do not change from men to women or vice versa. Rather, they become feminized men or masculinized women. Claiming that this is civil-rights matter and encouraging surgical intervention is in reality to collaborate with and promote a mental disorder.

Instead of tackling a complex issue on which there is little (none?) long-term research on either physical or psychological repercussions to children and teens who undergo sex change “treatments,” the left instead attacks one word, “surgery,” and dismiss Rushdie as a heretic of their latest deeply-held belief system.

if you read the Torah at what brought on the Flood in the Age of Noah and compare that with current events , well I will leave it to others to comment upon it.

There’s no mention of gender confusion. The generation of the flood engaged in unspecified sexual immorality, idolatry, and robbery, and animals were mating outside their species, but it was the robbery that sealed their fate. (Rashi, Genesis 6:11-13)

I am so pleased you will leave serious comments to others. Reallllly what does the Torah have to do with anything? Go back to your silllly house of prayer and masterbate your brain again.

Targeting prepubescent and adolescent children for physical (e.g. medical corruption) and mental (e.g. homosexual orientation) transgender conversion therapy is a step too far for a diverse and progressive people.

No to the likes of California state Sen. Scott Wiener – and gov. jerry brown.

Let’s see what actress jennifer lawrence has to say about this – if we can get her away from watching harvey weinstein take a shower.

Back off sex change surgery for children?

Of course, that’s a no brainer.

“The makers of our Constitution undertook to secure conditions favorable to the pursuit of happiness. They recognized the significance of man’s spiritual nature, of his feelings, and of his intellect. They knew that only a part of the pain, pleasure and satisfactions of life are to be found in material things. They sought to protect Americans in their beliefs, their thoughts, their emotions and their sensations. They conferred, as against the Government, THE RIGHT TO BE LET ALONE — the most comprehensive of rights, and the right most valued by civilized men.”
Olmstead (1928), Brandeis in dissent (emphasis added by fscarn).

I give you anorexia nervosa in which the individual is absolutely convinced they are obese. Why can not this apply to transgender? The mind sees one thing… the body is hardwired another way. It assists the argument of what is “normal” since no one can be “abnormal” …well maybe except non-Progressives.

“I give you anorexia nervosa…”

I had no idea it was contagious!

Funny, I haven’t heard anyone say “But we can work with these people!” in quite a while.

Quite frankly, I find it hard to take seriously anything said by someone whose brain is so addled that he could write what he did about Trump and Hillary. Even a broken clock is correct twice a day, but I still wouldn’t rely on it to tell the time.

I bought Satanic Verses when the Ayatollah banned it, purely as a gesture of defiance against censorship. Since I’d paid for it I decided I might as well read it, and was surprised to find that I actually enjoyed it. I also wondered how carefully whoever had described it to the Ayatollah had read it first. It’s deliberately written so that there are several equally valid ways to read it, including that it’s all happening inside the diseased head of a lunatic in an asylum, so there’s no need for a Moslem reader to take such offense at it.

There is one reason for Moslem readers to take offense that you may have overlooked. If it’s true.

If a little boy feels a bit like a girl one obvious likely cause is a hormonal imbalance: too much estrogen or too little testosterone, and all the estrogen pollution in the environment would be one likely culprit. A real or normal doctor, faced with a hormonal imbalance, would never exacerbate it by, in the case of an overexposure to estrogen, prescribing yet more estrogen. That comes straight from the doctor’s oath: first do no harm.

Ditto for little girls who feel a bit like boys. If anything that feeling is an indication of too much testosterone or too little estrogen, calling, IF ANYTHING, for a doctor to try to effect a more feminine balance. For doctors to do the opposite is both child abuse and a violation of their fundamental oath not to make any medical condition worse.

There may not even be a hormone imbalance, though. When I was a kid, I liked to climb trees, go fishing with my dad, and make forts out of the TV trays, pillows, and blankets. While I also like “baking” in my Easy Bake Oven and having tea parties for my dolls and dog, I definitely had a tomboyish streak and resisted wearing skirts and dresses except on holidays or for school (we wore uniforms, so I had no choice).

Boys who like dolls and girls who climb trees are not confused about their gender, and they are unlikely to have a hormonal imbalance. They may just like what they like and then grow out of it. By the time I was 12, I was very girly-girl, all pink and bows and twirling skirts because that’s what made me happy. Everything isn’t a crisis, much less a crisis of identity.