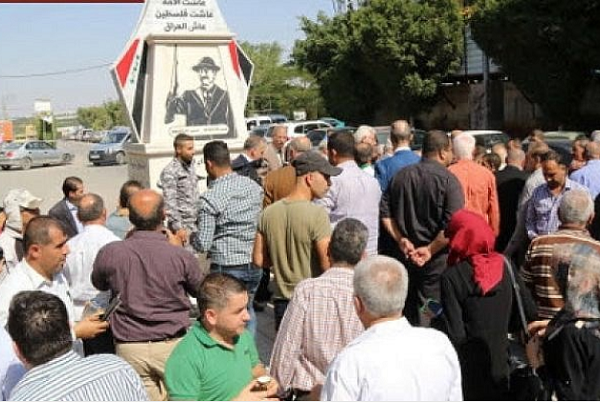 In a deliberate show of anti-Israel sentiment, a Palestinian city has erected a statue of Saddam Hussein bearing the words:  “Arab Palestine From River To Sea.”  This was Hussein’s rallying call for the destruction of Israel.

The monument was unveiled Wednesday at a ceremony attended by the Qalqilya District Governor Rafi Rawajba and two other Palestinian officials. It bears the slogan “Saddam Hussein – The Master of the Martyrs in Our Age,” as well as “Arab Palestine from the River to the Sea,” a slogan often used by Hussein that refers to the intended destruction of Israel.

The ceremony included numerous speakers, all singing the praises of Hussein.

The ceremony also featured speeches in praise of Saddam Hussein. Governor Rawajba said: “Saddam was an emblem of heroism, honor, originality and defiance, as was the martyr Yasser Arafat. [Both served as] a compass for the Arabs and their resolute decisions, and when they departed, Arabism departed with them. President Abu Mazen [Mahmoud ‘Abbas] makes sure to follow in the footsteps of these two great leaders.” He added that “The absence [of Saddam Hussein] is the absence of Arabism, since after his departure, the rebels dispersed in every direction, for he was the patron of [all] rebels.”

City Council member Hani Ja’idi said that “loyalty to the martyrs is proof of adherence to rights and principles that shall not wane as long as honorable people uphold them… This monument commemorates the martyrs and great leaders.” Arab Liberation Front secretary Rakad Salam also spoke, “on behalf of the Arab Ba’th party and the Arab Liberation Front.” He reviewed “the glorious deeds of the martyr Saddam Hussein and his support for the liberation movements, in particular the Palestinian revolution and the PLO.” Saluting Hussein and Arafat, he stressed the need to “deepen national unity in order to stand firm in the face of all the plots that are concocted against our people.”

Then there’s the American left’s Jewish hate, from Coast to Coast:

The Algemeiner’s 1st Annual List of the US and Canada’s Worst Campuses for Jewish Students:

“…admiration for Adolf Hitler voiced by students at the University of Tennessee, Knoxville…violent anti-Israel protest at a movie screening at UC Irvine….Hindu student leader Milan Chatterjee, who was hounded out of UCLA because he failed to support the boycott of Israel…a course offered at UC Berkeley exploring how the Jewish state might be dismantled.”
https://www.algemeiner.com/the-40-worst-colleges-for-jewish-students-2016/

Astounding this is happening in the United States.

Soros and his 18 billion dollar sedition fund will ensure Saddam Hussein is also made a hero among the American left.

Cut off all US aid to the city of Kalkilya, immediately.

If it weren’t so serious, I’d suggest this is great! and there should be immediate 24-hour re-broadcasts from loudspeakers of Baghdad Bob’s famous last broadcasts, as he blathered of Saddam’s glorious victories, etc., while coalition forces cut through his forces like a hot knife through butter; then immediately followed by video of the dictator being dragged from his hole in the ground. Then deservedly hanged. That’s his pathetic disgusting legacy.

Hahahahahahahha brought to you by a people who have never missed a chance to miss a chance!

When Saddam was paying cash rewards to the families of suicide bombers/murderers, that fact alone justified us going in and removing him. I never understood why that fact did not receive more emphasis in the run up to the war and the subsequent recriminations over it.

Because the terrorists he sponsored weren’t attacking America, so they didn’t count. Bush’s key insight in his speech on 11-Sep-2001 was that we were at war, not merely with those directly involved in that day’s attacks, but with the entire international Islamist terrorist network of which they were part. Saddam Hussein was a key sponsor of that network. Neither Bush, Cheney, nor anyone else in the administration ever claimed that he had been directly involved in the 11-Sep attacks (though in the early days he had not yet been ruled out, and even later it was legitimate to wonder whether he might have had some peripheral involvement).

The Dem spin, though, was to ignore the existence of the broader network and pretend that “terrorism” referred exclusively to that one operation, so that correctly pointing to Hussein’s role in international terrorism, and therefore to his status as a declared enemy of the USA, was a dishonest attempt to insinuate that he was involved in that operation. We were at war with him because we were attacked on 11-Sep-2001, but not because we thought he did it.