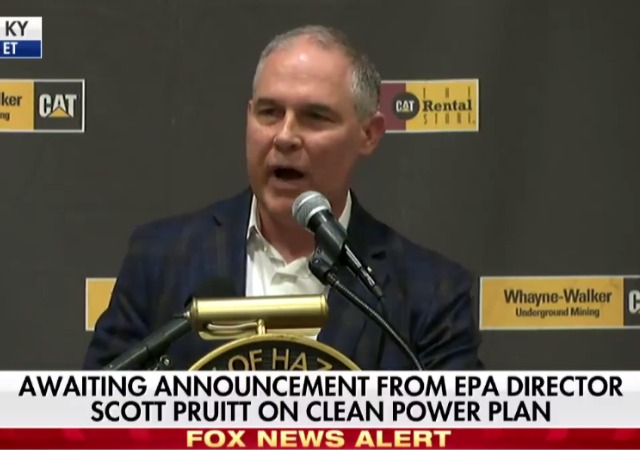 “Tomorrow, I’ll be a signing a proposed rule to withdraw the so-called Clean Power Plan of the past administration,” said Pruitt at a mining event.

.@EPAScottPruitt: "Tomorrow, I'll be a signing a proposed rule to withdraw the so-called Clean Power Plan of the past administration." pic.twitter.com/6hjvfkoX5d

From its conception, the Clean Power Plan (which became the global warming regulatory bit of the Clean Air Act) has been controversial due to its aggressiveness in (supposedly) reducing greenhouse gases.

Global Warming Alarmists loved the CPP, while the energy industry largely hated it.

The CPP was originally slated to take effect in 2022 with the goal of reducing greenhouse gas emissions by 2030. But doing so comes at great cost to conventional energy purveyors.

Under section 111(d) of the Clean Air Act, the EPA also intends to regulate CO2 emissions from existing power plants. Known as the Clean Power Plan (CPP), the agency’s proposed regulations set state-specific emissions limits based on the greenhouse-gas-emissions rate of each state’s electricity mix. The EPA estimates that its regulations will reduce greenhouse-gas emissions approximately 25 percent below 2005 levels by 2020, and 30 percent by 2030.[3] Each state has interim targets it must meet beginning in 2020, and the EPA proposed that states use a combination of four “building blocks” to achieve the emissions reductions: (1) improving the efficiency (heat rate) of existing coal-fired power plants; (2) switching from coal-fired power by increasing the use and capacity factor, or efficiency, of natural-gas combined-cycle power plants; (3) using less carbon-intensive generating power, such as renewable energy or nuclear power; and (4) increasing demand-side energy-efficiency measures.

States will have one year to develop and submit their own compliance plan or develop regional plans with other states, though the EPA will likely grant extension waivers. After that, the EPA will take approximately one year to approve or reject the plan. The EPA is currently developing a federal “model” for states to consider and will impose a federal plan for states that do not comply.

No matter how states concoct their plans, the economic damages will be felt through higher energy costs, fewer job opportunities, and fewer choices through implementation of efficiency mandates that remove decision making from producers and consumers. The EPA’s idea of flexibility will not soften the economic blow; it merely means that families, individuals, and businesses will incur higher costs through different mechanisms.

Like most progressive energy plans, job stagnation, slowed industry growth, and significantly higher energy costs were predicted results of the CPP. And, like most Obama-era regulatory provisions, the CPP faced an uphill legal battle after the Supreme Court granted an unusual stay in 2016, halting its implementation.

According to the Daily Caller, the EPA is as of yet uncertain whether they’ll replace the CPP or just toss it out completely:

Draft EPA plans to repeal and possibly replace the CPP have already leaked to the media. EPA says repealing the rule will save Americans $33 billion in compliance costs.

The Obama administration claimed the CPP would only cost $8.4 billion and deliver public health and climate benefits ranging from $14 to $34 billion by 2030.

EPA won’t propose a replacement to the CPP in its proposal, according to draft plans. The agency may issue a separate rule, asking for comments on what could replace the CPP.

“The EPA has not determined whether it will promulgate a rule under section 111(d) to regulate greenhouse gas (GHG) emissions from existing EGUs, and, if it will do so, when it will do so and what form that rule will take,” reads the draft.

This is good. Stay off private or military planes, Mr. Pruitt. And remember who you’re married to. That should work wonders for your tenure.

Like most Obama initiatives, this patently illegal action was not set until Late in his administration, the summer of 2015, as another ticking time bomb which President Trump has to defuse.

The media and the progressive democrats (sorry for the repetition) will claim that the President is unilaterally ending a long-standing law and thus sending us back to the Stone Age.

Of course. it is not long-standing (never implemented due to the Supreme Court), it is not a law and by eliminating it nothing has been changed from present energy use.

I hope the EPA will be re-focused to its mission: preventing and cleaning up pollution of our air, land and water done by human activity. I would like to see a goal of producing an approval system that is clear, verifiable, and predictable. I would like to have the agency be very clear about what kind of new industrial activity is approvable, so that a company can know when it is making an approvable proposal, and also know that it is likely to get a timely response.

This is absolutely going to require re-building EPA’s engineering expertise.

The Obama EPA failed its fundamental mission to notice known hazards to the water systems of many cities and towns: the story of Flint Michigan was simply the one that got all of the national attention.

The Obama EPA also failed to address known engineering hazards that resulted in the The 2015 Gold King Mine waste water spill into the Animas river.

A less clear-cut case is the Deepwater Horizon oil spill into the Gulf of Mexico by BP. At the time, members of the online community who claimed to be former employees of BP contended that they were not surprised by the explosion and subsequent spill. BP’s ownership direction had changed from engineering to finance, their engineering staff had been purged along with its institutional memory. Then cost-cutting measures that affected safety were imposed.

I am not certain whether well-qualified engineers working for the EPA could have detected BP’s loss of quality: however, the incident is instructive, because it suggests that a goal of the EPA approval process should be to recognize changes in company management that have the potential to produce disasters.

In a constitutional republic, that would be the end of it. However, our country has become infested with a pathological legal system, so until it’s over, it’s not over.

Schneidermann knows that he doesn’t have a legal case; he’s fishing for a federal judge that is willing to declare himself Lord and Sovereign over the entire Executive Branch.

This decision is likely one of the reasons they were trying to get Pruitt to resign as well, they knew it (or something like it) was coming and they were desperate to stop it.

Actually NOT a good move. A future warmenist administration could undo this. The correct move would have been to settle with the plaintiffs in the ongoing case, and enter a consent decree barring the EPA from ever implementing such a rule. That’s how the EPA usually does business.

That depends. How enforceable is a consent decree?

I can easily see an Obama-style warmist president issue a diktat that he/she claims is exempt from the decree, with a ‘protest’ all ready to be filed, and a friendly warmist judge to side with the warmist administration on the appeal. Bing-boom-bang done.

Then again, I’m not a lawyer. Just a sneak.