This is not a statue, it’s an idol. 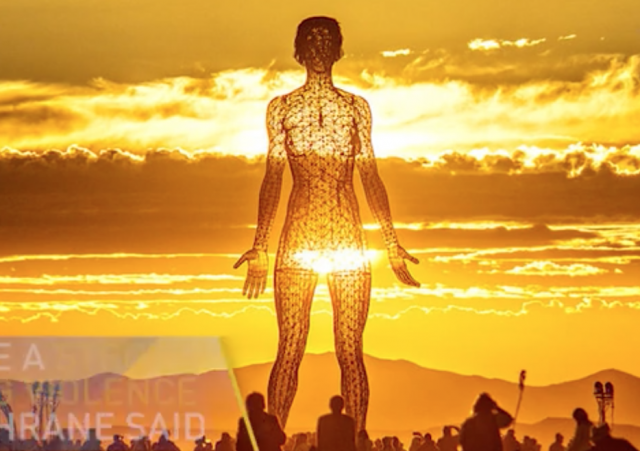 The world has gone mad, but thank the Good Lord for the National Park Service.

A group wanting to bring construct a 45-foot-tall naked lady opposite of the Washington Monument on the National Mall was denied a permit by the National Park Service. The NPS expressed concern that the structure would detract from established historical monuments and possibly damage underlying turf.

A group that wanted to bring a 45-foot statue of a naked woman to the National Mall was denied a permit because it would detract from historic monuments and could damage the turf, National Park Service (NPS) officials said.

“The proposed nearly 48-foot height of the statue introduces a visual element that would diminish the property’s significant historic features by altering the setting and historic character of the National Mall landscape,” NPS spokesman Mike Litterst said in an email.

Organizers of Catharsis on the Mall wanted the R-Evolution statue to stand near the Washington Monument, facing the White House, for 91 days between November and March.

From their crowdfunding pitch:

R-Evolution is Deja Solis, a woman standing in her strength and power… expressing her humanity; how she feels when she is safe, when she can just be. R-Evolution is the third in a series of three monumental sculptures, The Bliss Project, by artist Marco Cochrane conceived of in collaboration with model Deja Solis, these sculptures are intended to demand a change in perspective… to be agents for social change. They are intended to challenge the viewer to see past the sexual charge that has developed around the female body, to the person: to de-objectify women and inspire people across the world to take action to end violence against women, create space for women’s voices and demand equal rights for all, thus allowing everyone to live fully and thrive.

Standing 45 feet tall, R-Evolution was first brought to Burning Man in 2015 by Marco, partner Julia Whitelaw, and the Bliss Crew, and with your help, we will install her in front of the Washington Monument, facing the White House.

“Don’t objectify women! But here, look at a statue of a naked woman!”…there is not an eye roll big enough for this one.

All of the obvious logical fallacies aside, there’s a more troubling issue here.

This is not a statue, it’s an idol.

Catharsis on the Mall planned to hold vigils at the statue and though it’s scarcely mentioned in reports, the permit request included room for a temple, according to NBC.

Catharsis on the Mall is an annual vigil for healing where artists, activists, D.C. community, and passers-by, join together to let go, hold space, share, sing, burn a Burning Man-inspired temple, and dance until sunrise. All are welcome to this free public event. In its inaugural year, Catharsis focused on healing from the drug war, and last year, Catharsis highlighted Post-Traumatic Stress Disorder (PTSD) in the immediate wake of the election. This year, Catharsis has chosen the art theme “Nurturing the Heart,” and along with its partners, including Equal Means Equal, invites volunteers to continue the vigil to raise awareness about the Equal Rights Amendment (ERA).

Words fail me. Well, actually, they don’t. This whole idea is “your brain on drugs” and demonstrates why Burning Man is held out in the middle of the desert where the participants’ insanity can’t hurt anyone but themselves.

notamemberofanyorganizedpolicital in reply to chessy. | October 27, 2017 at 5:17 pm

Wanna Bet the Statue’s Name was to Be Hillary?

Sounds like a SWELL addition to the statuary on the capital grounds in Sacramento…!!!

They would need two statues of naked women doing what they claim comes naturally, but we know is unnatural.

notamemberofanyorganizedpolicital in reply to legacyrepublican. | October 27, 2017 at 5:18 pm

Hey! Leave Michelle and Barry out of this!

Maybe the group who wanted to erect the statue in D. C. can erect the statue up now at Harvey Weinstein’s home to help show him a thing or two about how women want to be perceived and treated as having strength and power.

Excellent idea. When they finish the exhibit at the Weinstein residence, they can perhaps put the statue on the road in front of the homes of other politicians, media people, etc who need to be shamed. It’d be like the union picketing where they have the giant, inflatable rat.

No, no, he’d just go outside and do something awful to it.

Don’t be so quick to praise the National Park Service. These were the guys who willingly and enthusiastically turned themselves into Ogabe’s Brownshirt Minions to carry out the petty closures of things that didn’t need to be closed… in response to “government shutdown” which ended up costing more than had they done nothing.

Perhaps, it would be more appropriate to put it in the lot the Clinton’s bought next tot their home in Chappaqua, New York.
It might just keep Bill Clinton’s appetites satisfied.

Anybody want to bet they collected money for this D.C. project knowing that they would be turned down, and now the money is going to stay in their pockets? Something like “We’re using the funds donated to scout out other locations…”

There is “fat shaming” all over this project…!!!

… a woman standing in her strength and power …

… still needs a permit from the bureaucracy.

Well, so much for that statement.

notamemberofanyorganizedpolicital in reply to tom_swift. | October 27, 2017 at 5:19 pm

So do the Democrat Party slaves……

Marco Cochrane is probably fishing for federal grant funding. Someone has to pay to transport, warehouse and curate that ridiculous iron monstrosity, yo.

I’d like to see groups like this forced to pay for environmental impact reports. I’d also like to see where exactly Cochrane fabricated the statue – and if his workshop conforms to OSHA standards for metal fabrication, VOC compliant paint spray booth etc.

too bad: had they installed it there, someone could have scattered copious amounts of bird seed nearby, and the pigeons would have had somewhere to roost… 😎

So, the statue is a goddess?

If so, approving it would seem to violate the establishment clause. Unless equal access were provided for those of all faiths to put their symbols there as well, of course. But if one assumes “equal” would imply “of equal size,” the Park Service would quickly run out of space here, wouldn’t it?

If this is a representation of their perfect woman, why does
it lack a penis?

Well, the old joke was that any woman can get all of that she wants.

A perfect woman…??? Introduce me…

Either that, or it’s a monument to ‘upskirting.’

This comes to mind:

after this, we can install a statue of the Creature from the Black Lagoon in the Reflecting Pool.

We’ll find out it’s a transvestite.

Maybe they should just come out with what they want and have her sit on the monument instead.

From the top picture, it looks like her hoo-ha is glowing.

I thought #notallwomen had vaginas? Isn’t this statue kind of biased? Maybe even cis-ed???

You have hit on the real reason for the rejection of the permit. The feminists are so old worldy. They were not inclusive of the full LGTBXXXXXXYZ community.

Would the statue be one of an overweight minority lesbian?