“Raqa will be happy again” 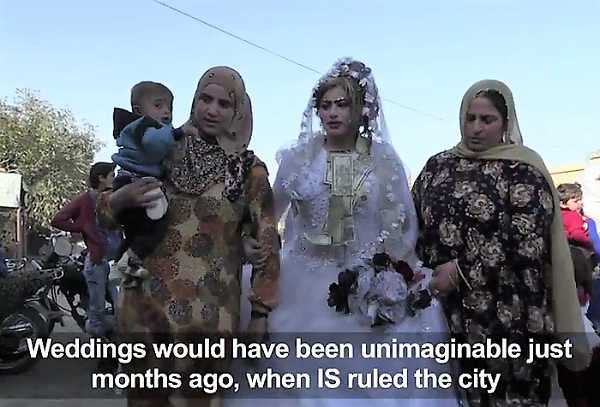 ISIS is renowned for its harsh rules and for its punishments for breaking those rules.  When they weren’t tossing gay people off buildings, beheading “infidels,” or setting Jordanian pilots on fire in cages, ISIS was busy imposing restrictions on the civilian population within its territory (what it once called the caliphate).

When Raqa, Syria was under ISIS control, music and dancing were banned.  Women were required to wear black, to honor the ISIS flag.  Now that they are gone, joy has returned, as have music and dancing.

At a house in Syria’s Raqa, women and men danced together in celebration at a wedding that would have been unimaginable just months ago, when the Islamic State group ruled the city.

Residents told AFP that Ahmad and Heba’s wedding, held Friday in Raqa’s western neighbourhood of Jazra, was the first in the city since US-backed forces seized it on October 17.

. . . .  The dancers hopped and swayed to-and-fro as children ran around. Elders looked on approvingly from seats and benches on the edge of the makeshift dance floor.

Almost everything in the scene would have been impossible during the three years of brutal IS rule.

The group banned music and dancing, imposed a strict dress code, prevented women from wearing make-up, and forcefully prohibited the mixing of men and women.

“Before IS, there was dabke, songs and the traditional rituals of the region at our marriages, but IS banned everything, there was not a single celebration,” the man in his fifties told AFP.

“Today it’s a return to joy,” he added, his face lit up with happiness.

. . . .  Khalaf al-Mohammed, another of the groom’s cousins, was delighted by the celebration.

“It’s been years since we danced the dabke, we’re tasting life again,” the 27-year-old said, leading the line of dancers and spinning his prayer beads.

“Everyone was waiting for this moment. What use is there to a wedding when everything is black?” he asked, referring both to the robes IS imposed on women and to the colour of the group’s flag.

“Today everything is white,” he said, with a smile.

“No one will prevent us from singing and dancing,” the 30-year-old said.