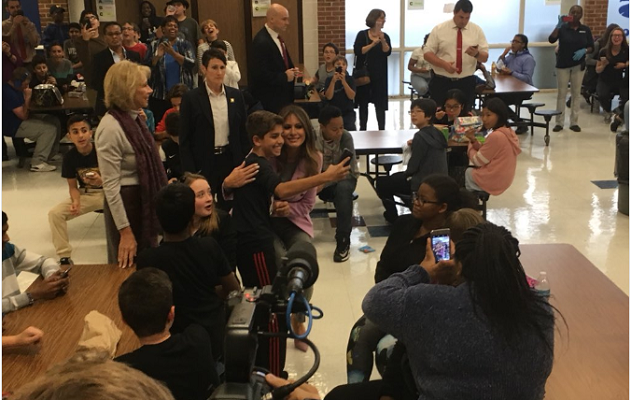 America’s First Ladies have historically selected an area of focus during their husband’s tenure as president.  Nancy Reagan chose the war on drugs (“Just Say No”), Laura Bush chose literacy and education, Michelle Obama chose nutrition and exercise.  First Lady Melania Trump announced that as First Lady her focus would be on curbing bullying in K-12 education, particularly cyberbullying.

The Guardian reported at the time:

Melania Trump, whose husband has built a public profile partly around his vulgar and offensive Twitter account, called for a gentler and kinder America on Thursday, where children can spend time on social media without fear of harassment.

In a rare public appearance, Trump portrayed her husband as a devoted family man with “deep love and respect” for all Americans with a speech intended to help soften his public image with women.

“Our culture has gotten too mean and too rough, especially to children and teenagers,” Trump said at a sports center in Berwyn, a suburb of Philadelphia suburb. She drew cheers as she continued.

“It is never OK when a 12-year-old girl or boy is mocked, bullied or attacked. It is terrible when that happens on the playground and it is absolutely unacceptable when it’s done by someone with no name hiding on the internet.”

As first lady, Melania Trump said she would work to combat online bullying and harassment. As a presidential nominee, Donald Trump has used Twitter to mock and degrade his opponent and women who have criticized him. He also has a pattern of sharing posts from sources with a history of spreading racism, antisemitism or white supremacy.

The media is attempting to undermine Melania’s efforts by calling her a hypocrite because of the perception that her husband, the president, is a bully.  I actually agree that President Trump is a bully, but the president deals with grown men and women on a political or business-based playing field.   He’s an adult dealing with adults, many of whom, frankly, are also bullies.

The bullying that Melania will focus on are those children who are bullied at school because they aren’t in the “in crowd” or because they may be different from the perceived norm in some way (physical fitness, sexual preference, ethnicity, religious beliefs, and etc.).  While I have reservations about coddling children from the reality of human interaction and competition, I don’t think that Melania’s anti-bullying crusade has anything at all to do with how adult professionals and politicians conduct themselves.

Instead, Melania says she is focused of fostering respect and kindness in students at the K-12 level.  Who can argue with that?  Oh, right.

Despite the false equivalency and strange resistance to her goal of curbing bullying, Melania paid a surprise visit to a Michigan school and spoke out against bullying.

First lady Melania Trump is finally talking about the anti-bullying campaign she promised to launch, in a surprise visit Monday to a Michigan middle school with Education Secretary Betsy DeVos.

. . . .  Stephanie Grisham, Trump’s spokeswoman, tweeted shortly before noon ET about Trump’s effort to reduce “social isolation” of schoolchildren by encouraging them to ensure that no child eats alone at the school, located in Oakland County, northwest of Detroit.

“I encourage you all to find a new friend, get to know new things about them. Don’t let anyone sit alone,” Trump told students in the cafeteria.

“I encourage you all to find a new friend, get to know new things about them. Don’t let anyone sit alone.” –@FLOTUS #NoOneEatsAlone

Lots of excitement as @FLOTUS joins 7th & 8th graders for lunch in Michigan to kick off the Week of Inclusion. #NoOneEatsAlone pic.twitter.com/puLdZtXyh3

Melania had some words of wisdom and hope for students.

In a prepared statement, Trump said the visit to the school was part of her “ongoing commitment to the overall well-being of children.”

“By our own example, we must teach children to be good stewards of the world they will inherit,” she said in the statement. ” We need to remember that they are always watching and listening.  It is our responsibility to take the lead in teaching children the values of empathy and communication that are at the core of kindness, mindfulness, integrity, and leadership.”

Considering what Donald Trump has been up against from the get-go, and still is, I don’t consider him a “bully,” not at all.

Really? What was he up against, that justified his bullying behavior for so many decades? Did his big sister bully him? Or who?

One might make a case that Donald Trump “bullied” his way into the Oval Office. Except, he was aligned against an extensive, entrenched political establishment, a massive, biased media, and considerable millions of dollars. These hardly being weaklings and, if anything, superior forces, ones with whom he’s still in combat.

It was the will of the people, many of whom could be considered to have been bullied by the previous administration, who brought the victory to the President. There are those who are uncomfortable with his aggressive, feisty manner. However, I take into consideration with whom does he demonstrate this. Or, to put it another way, the toes he’s stepping on are ones that deserve it.

He was a bully long before he even thought of a political candidacy.

And there was Melanya slashing at the jewish reporter who revealed the true story about Nelanya’s family back home.
Her inner anti Semitism there for all to see.
As for her wonderful husband. He assisted his father in disinheriting the brother Herb, he resurrects now. After that evil act he denied the dead brother’s ill baby money promised for medical care.
Oh yes, these are upstanding world citizens…….representing evil day in and day out.

But what kind of shoes was she wearing? We all know that’s the most important thing . . . .

Hmm “finally” getting to her no bully program?

She could use her own son as an example of the bully’s on the left, most need to be locked up.

I wonder whether Barron’s been bullied. I’m certain most of his classmates have heard their parents say hateful (even if true) things about his father, and may even have been given permission by their parents to hate his father; I wouldn’t expect kids that age not to transfer some of that hatred to the son.

I already know Melania is an awesome and special person… I just open these articles to see pics of her. 🙂