Proving once again that leftists have no sense of humor 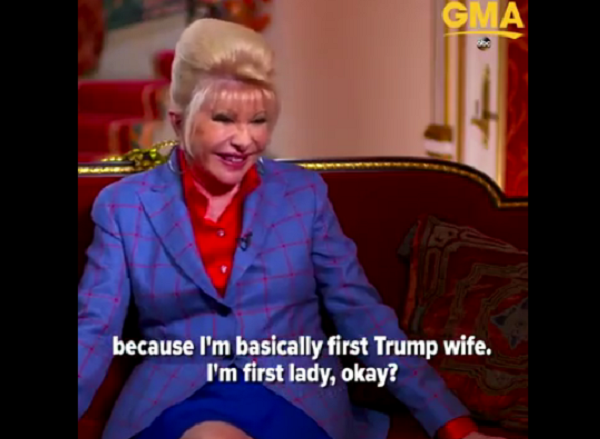 The leftstream media is trolling the White House bigly over Ivana Trump’s joke about being the “first lady.”

Having first decided there was something fishy about First Lady Melania Trump’s decision to let her and the president’s youngest son finish his school year in New York before moving to the White House, then created a flurry of accusations that Melania secretly hates her husband and won’t hold his hand, they’ve now landed on an imagined insult to her from Trump’s first wife, Ivana.

When I first saw the headlines, I was a bit puzzled.  How on earth, I wondered, could Ivana possibly think of herself as the “real” First Lady?  So, like any marginally curious person, I looked up the video and watched it.

Color me crazy, but that looked to me like a joke.  I’m Trump’s first wife, so I’m really the “first lady.” No caps, not a “title.”  Just a joke, linking “first wife” with “first lady.”  If it hadn’t been for the headlines and for Melania’s response, I wouldn’t have thought twice about it.

Which brings us to Melania’s response.  Why did she respond at all?  Her husband’s a master troll of the media, couldn’t she see that the media was trolling her?  Apparently not.

From Newsweek, perhaps the most vehement in its anti-Trumpism among “mainstream” publications:

Ivana Trump and Melania Trump keep saying they’re fine with each other, but the pettiness of their long feud is alive and well.

Ivana Trump let everyone know she is in fact “first lady Trump”—she just isn’t the “first lady of America,” when she appeared on The Wendy Williams Show Friday to promote her new book, Raising Trump.

“I tell you, I’m technically first lady Trump,” Ivana told Williams. “I was first wife. I don’t know what is Melania’s problem. She just have to get over it. She is first lady of America, but I’m first lady Trump, excuse me, and have three grown-up kids.”

. . . .   Melania Trump’s spokesperson clapped back at the original Trump wife earlier this week by releasing a statement that said, “Mrs. Trump has made the White House a home for Barron and the President. She loves living in Washington, D.C., and is honored by her role as First Lady of the United States. She plans to use her title and role to help children, not sell books. There is clearly no substance to this statement from an ex, this is unfortunately only attention-seeking and self-serving noise.”

When Williams asked Ivana Trump about Melania Trump’s statement, Ivana Trump said, “I have no idea why she did it, ’cause I never said I’m first lady of America. Better her than me, frankly, you know.”

English is not Ivana’s first language, so her joke may seem a bit awkward to some, but it was still quite clearly (to me, anyway) a play on words, a joke.

My guess is that Melania didn’t see the comment by Ivana and was responding (or even more likely her people responded) to news reports that Ivana thought of herself as the First Lady.

This is a mistake she will not make, or allow her spokespeople to make, again.

So right – Leftist, Democrats, et al, have no sense of humor whatsoever. Just like all the psychopaths that are drawn to their organizations……..

Ivana’s little joke was just that, a light-hearted tease. And she delivered with a laugh.

Sadly I see Melania as an automaton programmed by DT.

I don’t think it was Melania that actually responded.

And considering the state of the world we live in, why are we discussing this again?

Next you’ll be discussing her shoe selection

It wasn’t. It was generated by one of her staffers.

Actually, I haven’t had a chance to weigh in on her stilettos. They were FABULOUS.

She’s so seriously chic and beautiful that she could wear banana peels strapped to her feet, but those shoes were awesome sauce.

But yeah, we need to be only serious and angry and militant and focused on our objectives to the exclusion of any humor, lightness, love, joy, or fun.

Um, wait, aren’t we conservatives here? I think we’re capable of thinking about shoes and Iran without getting confused and thinking shoes are more important than a nuclear Iran, don’t you?

It was a joke, but it reported by the Daily Mail as a challenge.
However Ivana also made it clear she has no ill feelings for Melania, but you have to read/see the entire interview to get that.

Her staffers need to learn (hopefully HAVE learned from this) NEVER to take anything the press says at face value. Seek out the truth of the story before responding in any way and then use the truth as the ultimate leverage to hit back.

Get a fucking life for fucks sake!!

I’d actually put this the other way around because if the infantile waybtge media has reacted I’d actually make this mother fucking media 0 – Mrs Trump 1.

The democrat media is a joke.

Hey, traitor Jane Fonda is calling for Weinstein to be jailed. Imagine? Fonda should have been hanged for treason. (There’s still time.)
http://www.26thmarines.org/janefonda.html

Hanging’s a bit much for her relatively harmless bit of treason, but she should certainly have done time.