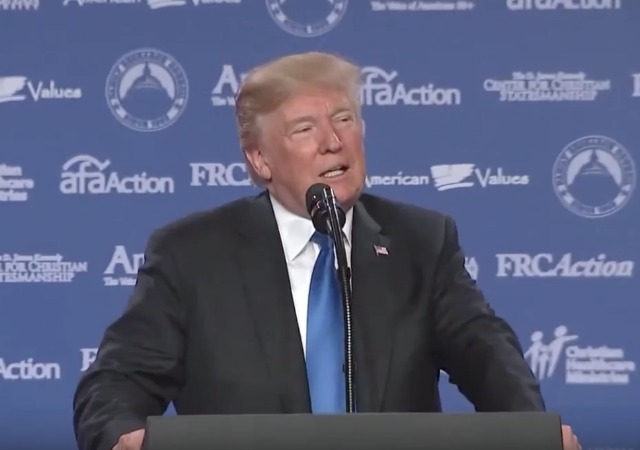 The order intended to temporarily curb immigration from well-known state sponsors of terror.

A federal judge in Maryland early Wednesday issued a second halt on the latest version of President Trump’s travel ban, asserting that the president’s own comments on the campaign trail and on Twitter convinced him that the directive was akin to an unconstitutional Muslim ban.

U.S. District Judge Theodore D. Chuang issued a somewhat less complete halt on the ban than his counterpart in Hawaii did a day earlier, blocking the administration from enforcing the directive only on those who lacked a “bona fide” relationship with a person or entity in the United States, such as family members or some type of professional or other engagement in the United States.

But in some ways, Chuang’s ruling was more personally cutting to Trump, as he said the president’s own words cast his latest attempt to impose a travel blockade as the “inextricable re-animation of the twice-enjoined Muslim ban.”

Omar Jadwat, who directs of the ACLU’s Immigrants’ Rights Project and represented those suing in Maryland over the ban, said: “Like the two versions before it, President Trump’s latest travel ban is still a Muslim ban at its core. And like the two before it, this one is going down to defeat in the courts.”

Tuesday, a federal judge in Hawaii granted a temporary restraining order on the travel order originally set to go into effect at Midnight Tuesday night.

Unlike the last two travel orders, the likelihood of the third iteration being successfully combatted in courts is slim.

WAJ Adds: Thanks again to Kemberlee for covering this. My schedule yesterday and today is horrendous. Despite Supreme Court stays of prior injunctions, the District Court judges just keep at it in opinions that in parts read like political manifestos. In my DREAD-ful post I addressed several institutions that have been lost. Unlike some other institutions, like Higher Ed, there is something Trump and Senate Republicans can do about the judiciary — push through Trump’s judicial nominees. The pace of confirmations has been way too slow.

Can someone explain to the legally ignorant why Trump keeps instituting these bans, knowing they will be enjoined, only to structure them to end before they can be ruled upon by the SCOTUS? If he doesn’t think he’ll get a favorable ruling, why put out the EO in the first place? If he does, why not make them sufficiently durable to see the process through?

People focus on the “ban” part but what the first and second order also did was to order the State Department to figure out and recommend an enhanced vetting procedure.

Basically, he halted some countries that we know are bad (Obama’s list) for 90 days while the State Department figured out what to do and start doing it.

This new EO is the result of that. This is the order to start the new enhanced vetting procedures. It does not expire in 90 days. This new one says that the State Department must make evaluations every 180 days and modify the list as appropriate.

SCOTUS will hear this one as the 9th circuit will probably uphold the district court’s order.

This order is not temporary. The original one, and its replacement, were temporary in order to give State time to come up with the wording for a permanent order. This is that. So this will not expire before the Supreme Court can deal with it.

Wow. Doubling down on “WRONG” isn’t going to make it right.

That’s never stopped these leftist judges before, so it seems.

Old School: The President has veto power over the legislature to restrain their power.
New School: Hundreds of Federal judges each individually can veto about anything the President does because shut up.

Is it just me, or does the Left’s legal world never seems to CARE what the SCOTUS says, and doesn’t accept their word as final, “settled law,” or any such thing?

We’ve seen this with voter ID, guns, and now the travel ban! The Supremes give us a seal of approval, and in case after case, the Left judge shops their continued complaints where judges keep issuing opinions that conflict with Supreme Court precedent. Am I wrong??

what’s worse is that they seem to be more powerful and can overrule those SCOTUS agreements.

SCOTUS has not yet ruled. So they’re not purporting to overrule it.

I’m a total federal and Constitutional law ignoramus but why can’t a Maryland and Hawaii judge represent their states and only then block the order in that state?

Let’s send all of these people right to those states and structure the order to grant limited visas to these objecting states. Yes, the “refugees” could migrate but as soon as they leave the state then they are in violation of the EO. They could then be deported by ICE.

These are not state judges, they’re federal judges.

Isn’t there some rule that prevents what seems to be superfluous injunctions on something that a higher court has already allowed as ‘lawful’?

No court has allowed it.

We need a three-strikes-and-you’re-out law: Once a federal judge is overturned for a third time, he loses his cushy lifetime appointment, including any benefits accrued. We also need to repeal judicial immunity. Judges need to live under the laws the interpret, and as such need to be held liable for poor decisions.

Convenient huh? @POTUS “tries”, travel ban gets batted down just before it takes effect lasting until it’s within a day or so of expiration. Unelected officials not accountable to the people take the heat, Muslims continue to pour in, Trump looks like the “good guy” for trying to protect the people. All made possible by another group of unelected officials who just happen to rule in such a way that the same suit can filed and refiled repeatedly. In essence, “wash, rinse, repeat” as needed. The globalist agenda continues with the invasion of the west by Islam and the people are successfully snowed into never knowing that the whole thing was planned.

Same thing happens in Congress with Ryan and McCain and a host of other people all involved in biggest scam on the American people in history. The shame of it is that the American people refuse to see it. To acknowledge that you’re own “Government” has turned against you and is in fact acting to subvert the Constitution and instill the new international government would require action on the part of the people. The kind of action that apparently the American people are no longer willing to take.

The order has no expiration date. The last one did, because it was only intended to cover the gap until they could prepare this one.

You can see why liberals are so outraged with Trump though. Liberals have always been able to rely on the courts as their final port of call when something doesn’t go there way.

Now that Trump is putting in place HIS judges this directly threatens liberals grasp on power and control and they are running scared!

POTUS should demur and simply state, as did Pres. Andrew Jackson, “[the liberal judge] has made his decision, now let him enforce it.” The judiciary is not superior to the executive, especially in the field of immigration. Arguing his position before a biased judge merely provides a veneer of legitimacy to the judges’ illegitimate usurpation of power.