“I’m not gonna sue Lisa Bloom. I don’t think Lisa Bloom should be shot, like people want to shoot me. So there’s my f*cking statement.” 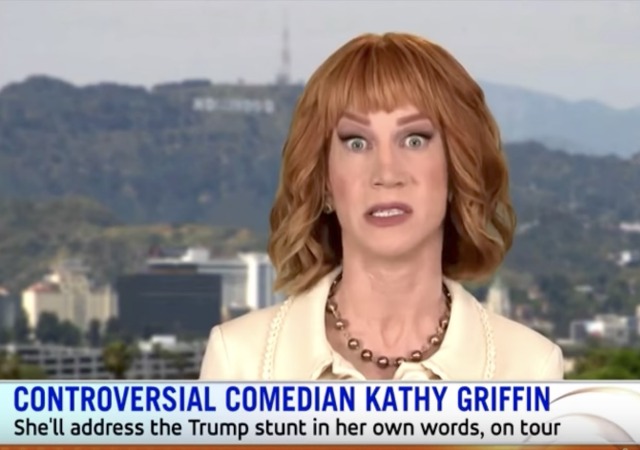 When Kathy Griffin released photos showing herself holding a decapitated likeness of Trump’s head, she retained the assistance of Lisa Bloom. Bloom is an attorney and daughter of Gloria Allred who briefly represented Harvey Weinstein at the onset of the flood of sexual assault allegations.

Recently, Griffin has gone public with criticism of Bloom.

Griffin spoke to the Daily Beast, sharing her side of the story:

It’s a narrative, as Griffin tells it, of Bloom’s astronomical legal fees and alleged “fame-whoring,” and of Bloom and Braden Pollock, her husband and law firm manager, “badgering” the comedian to drop her objections to accompanying Bloom on a national media tour.

After a widely ridiculed June 2 news conference at Bloom’s Woodland Hills, California, law offices, that media tour would have most notably included a joint appearance on ABC’s Good Morning America the following Monday. That interview didn’t happen after Griffin vetoed it.

“I’m not acting like some innocent—I’ve been around. But I’ve never been through anything like this. I’m still living it,” Griffin told The Daily Beast, recalling an acrimonious conference call several hours after the disastrous morning media event.

“Everybody was shouting,” she continued, adding that aside from Bloom and Pollock, Griffin’s entertainment attorney Bill Sobel and her longtime First Amendment lawyer, Alan Isaacman, were also on the call, and, like Griffin, vehemently opposed Bloom’s media strategy recommendations, which she said called for Bloom to join Griffin in a series of press and television interviews.

“Lisa said, ‘Kathy, I don’t like it that you’re the only other woman on this call and you’re not speaking up for me,’” Griffin recounted. “And I’m like, ‘Are you fucking kidding me? After everything I’ve been through, you’re gonna try to play the fucking feminist card with me?… Are you fucking nuts? It doesn’t work that way. I don’t have your back on this one at all.’”

Griffin said the media-friendly lawyer has been repeatedly dialing her and her manager/boyfriend Randy Bick’s cellphones in recent days, but neither has taken her calls.

Dear @LisaBloom pls stop calling me. If you’d like to refund me the tens of thousands of $$ I wasted on your services maybe I’ll talk to you

Bloom though, tells a different story. She too spoke on the record with The Daily Beast:

Bloom, in an email, said she was taking the unusual step of answering Griffin’s narrative because her former client, by granting an on-the-record interview, had waived attorney-client confidentiality.

Bloom disputed the testimony of both Bick and Griffin that she has been bombarding them with calls. “Really? Bombarding? Please show call logs then. I sent one text to Kathy in the last three months, and placed one call to Randy recently.”

Bloom also claimed: “The last time I spoke to Kathy, at a group dinner recently, she gave me a big hug, was very friendly and said everything was great between us. I had no idea there was a problem until a reporter reached out to me about this a few days ago.”

In a facebook video recorded while on tour in Australia, Griffin gave the following statement:

“If you want my Lisa Bloom statement, anybody, OK, here it is. Yes, I got Bloomed. Yes, I did not have a good experience with her. I felt that she and her husband exacerbated my personal situation…I’m not gonna sue Lisa Bloom. I don’t think Lisa Bloom should be shot, like people want to shoot me. So there’s my fucking statement.”

Griffin rapidly deteriorated into a victimhood diatribe, blaming the fact that she’s a woman for the treatment she’s received and then asked for everyone to get along.

To which Bloom responded:

“Kathy has now made a video about how women should stand together, and yet she’s attacked me, a lifetime women’s rights attorney, and not the rest of her team, all of whom were men. This is sad, but I still believe that Kathy Griffin is one of the funniest comics alive, that she meant no ill will with the [Trump] photo, and I wish her the best.”

Neither one will admit any wrong-doing, nor will they admit defeat, so I fully expect this mess to continue and all in the public eye.

Bloom, in an email, said she was taking the unusual step of answering Griffin’s narrative because her former client, by granting an on-the-record interview, had waived attorney-client confidentiality.

That’s not how that works. In Texas, given the most recent guidance from the Ethics committee of the State Bar, this action would get you reprimanded, if not disbarred.

While a client’s speaking to the press or “on the record” might waive their “Attorney-Client Priviledge” for legal purposes, just because my client bad mouths me does NOT mean that they have waived my DUTY to them of “keeping client confidences.”

I would hope that’s the case, but nothing in the piece above looks like Bloom divulged anything confidential. Going to the original Daily Beast piece this is the closest such divulgement I see:

“Bloom responded to Griffin’s video Sunday in a lengthy email to The Daily Beast (published in full at the end of this story), in which she argued that the June press conference went off the rails because Griffin “spontaneously chose to put aside the notes we had worked so hard on together.”
Bloom continued: “She said on camera ‘my notes are by the wayside and it’s all off the cuff’; and then ad libbed. I was sorry she made that choice but I respected her right to speak as she saw fit. She was, as she says, then widely panned for her comments. Now she blames me. She’s the only client I’ve ever had who chose to extemporize at a press conference rather than read from notes we prepared in advance.”

However, I doubt that an attorney truthfully saying that a client went off script in a press conference is unethical under these circumstances. Also, if Griffin did really refuse to take her expensive attorney’s advice, she has little basis for complaining that her services were worthless or harmful.

I have no doubt that Bloom is scum in the image of her mother, but this episode just proves that Griffin is even scummier.

However, I doubt that an attorney truthfully saying that a client went off script in a press conference is unethical under these circumstances. Also, if Griffin did really refuse to take her expensive attorney’s advice, she has little basis for complaining that her services were worthless or harmful.

It’s not that it’s unethical in the statement in and of itself. It’s that it reveals that there WAS a different plan, and that plan was then not followed by the client in public. That revealing that the client was told advice, then didn’t take it, and that it worked out badly for the client is itself a violation of client trust, because it makes the client look like an idiot.

The truth is a defense, and can be disclosed in legal filings if the client were to file suit for malpractice, or if the attorney files suit for slander (which is the proper remedy herein). But to just come out and send an e-mail statement definitely IS unethical, unless she has a signed release from Griffin stating that she is free to speak about the representation.

“It’s that it reveals that there WAS a different plan, and that plan was then not followed by the client in public. That revealing that the client was told advice, then didn’t take it, and that it worked out badly for the client is itself a violation of client trust, because it makes the client look like an idiot.”

Bloom would argue (and I think successfully) that when Griffith stated publicly that “my notes are on the wayside and it’s all off the cuff” she admitted publicly everything you just said.

And Griffith has done such a thorough job of making herself look like an idiot that I don’t think anyone could credibly claim that Bloom could have made it worse.

Kathy and Lisa both need a very long hot bath with strong soap. Maybe that will begin to clean up each woman.

Bath? They need to drink lye.

I don’t have a hore in this fight, but that sounds like good advice. The situation definitely calls for Fels Naptha.

Griffin: Where’s the soap?
Bloom: Yes, it does.

Written 00s of years ago, but the left never respects the truth,

Oh, what a tangled web we weave,
When first we practise to deceive!

WGAS what these terrorist bimbos do to ach other?

This should be corrected:

“Bloom, an attorney and daughter of Gloria Allred, is now representing Harvey Weinstein against sexual assault allegations from most of Hollywood.”

The statement is untrue; she no longer represents him.

Aside from that, it’s a great catfight to watch.

Please parse the title on the screenshot, “Controversial Comedian Kathy Griffin.” Is the controversy regarding some other issue, or whether or not she is really a comedian?

I know Kathy Griffin’s a comedian because the left keeps telling me she’s a comedian. It’s helpful that they do that because I couldn’t get that based on her comedy (such as it is).

That information comes from the same file drawer that keeps telling me that Islam’s a religion of peace.

“Controversial professed comedian,” perhaps? That is, she professes to be a comic, and is controversial as well.

Griffin news is about as interesting as reading a tide chart.

I guess the bloom is off the rose ?

Endora was much more attractive than that.

She is hard to watch and hard to hear.

Jamey Johnson said it better than anything I can saw about these two.

Looking at the photo at the top of this article, I’d say Griffin is ready for Halloween.

Understudy for Endora on “Bewitched”.

When the opposition self-destructs, stay out of the way!