“freedom of expression is ‘vital’ on campuses” 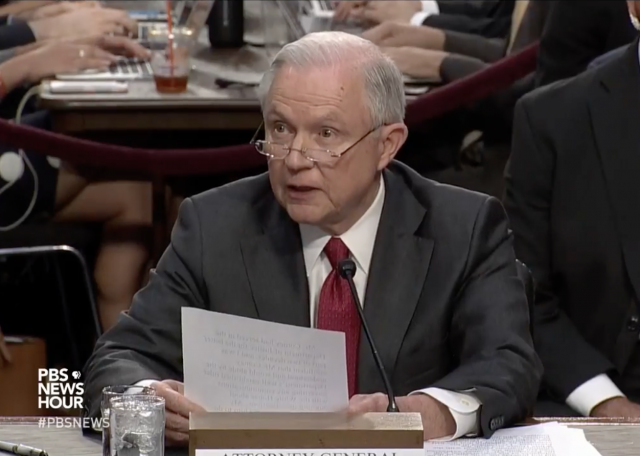 Jeff Sessions and the Justice Department have done more for free speech on campus in a few short months than the Obama administration did in eight years.

The Department of Justice (DOJ) is weighing in on a lawsuit regarding so-called free speech zones on a California college campus.

In a sharply worded brief filed in a U.S. District Court on Tuesday, the DOJ argued that by corralling free speech in specified zones, Pierce College has violated its students’ First Amendment rights.

But the DOJ’s argument extends far beyond the Los Angeles community college. The brief warns of a larger epidemic of suppression of free speech and expression at colleges and universities across the country, and asserts the U.S. government’s need to protect “constitutional freedoms in institutions of higher learning.”

“Free speech has come under attack on campuses across the country,” the brief reads. “Such failure is of grave concern because freedom of expression is ‘vital’ on campuses.”

The lawsuit at Pierce College was filed earlier this year by Kevin Shaw, a student at the school who alleges that his right to free speech was violated when an administrator told him that he needed to move to a free speech zone while he was handing out Spanish-language copies of the Constitution on campus.

Wake me up when they go after the real big problems like administrations that are negligent in their duty to protect the first amendment rights of conservative speakers and students who invite them….or maybe when they start pushing a crackdown on antifa and student groups like these that oppress the rights of others and threaten violence in the process.

…and after you wake up, wait to wake me up until they actively go after the faculty and administrators that incite riot and teach students to violate the rights of all others that do not march in step with their narrow distorted perspective.

What would happen if snowflake had to do something like protect his country? Would he/she tolerate the unsafe feelings? Would the military provide coloring books and warm cocoa? Our children are going insane from lack of meaning.

In the end socialism can only exist by restricting speech. Doubt me? Name a socialist country that doesn’t. Those socialist states were successful infiltrating US institutions of higher learning in the 1960’s onward. They know well that the key to USA’s conversion to an oppressive socialist state, the only kind of socialist state, (and their soft kickbacks for doing so) lies in their ability to indoctrinate freely and without opposition. Look for brainwashed generations 2 and 3 of those original corrupted educrats to fight free speech in the university system with every ounce of their being.

Actually, restricting free speech is more a hallmark of fascism than it is socialism. Just ask Antifa. (sarc)

Are people now beginning to understand how toxic the Obama administration was? Are people starting to connect the dots and see how the policies that sank Detroit and other Democrat centers of excellence are the same policies that Obama pushed that failed America? Are people going to start understanding that there is a trend here worth seeing?

The answer is by in large … no. It might have been possible that more would have … but our blow hard president has bashed all hope of that.