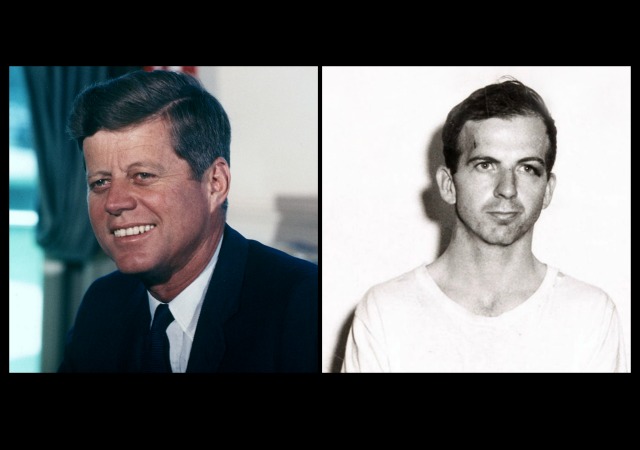 The government released some more of the files pertaining to the assassination of President John F. Kennedy by Harvey Lee Oswald along with files about Oswald’s death at the hands of Jack Ruby.

I scoured through a handful and noticed one particular name kept coming up: Arnold Johnson, the public relations director of the Communist Party the USA (CPUSA). In three instances that I have found so far the files stop when the documents are about to go into the substance of a Johnson speech or his correspondence with Oswald. I also found a file that documents a conversation between Oswald and a KGB agent.

JFK’s assassination continues to fascinate people (especially my father, whom I spoke with at length about these files) and so many theories have been floating around over who killed JFK: Cuba, Soviet Union, Mafia, the CIA, or even Vice President Lyndon B. Johnson.

Oswald was a Communist. He defected to the Soviet Union in 1959, married a Russian woman, and came back to the states in two and a half years.

On Tuesday, The London Times published an article that these files would show links Oswald had to Soviet spies. Those interested in this angle wanted to know more about his visit to Mexico City where he visited the Soviet and Cuban embassies, which took place seven weeks before the assassination.

So far I have found a few files about Oswald’s Communist ties and possible ties to the Soviets.

Conversation With a KGB Agent?

A document from the CIA dated 11/23/63 discussed a conversation between Oswald and Valeriy Vladimirovich Kostikov, a member of the Soviet KGB Assassination Department at the Soviet Embassy in Mexico City.

Our government learned about this meeting on October 1 when he called the Soviet Embassy and officials intercepted the call. He identified himself by his name and spoke in broken Russian. The file said that Oswald asked “the guard who answered the phone whether there was ‘anything new concerning the telegram to Washington.'” The guard told Oswald “that a request had been sent, but nothing had as yet been received.”

The file then explains that Kostikov worked on an operation from the KGB’s 13th Department, which covered sabotage and assassinations. 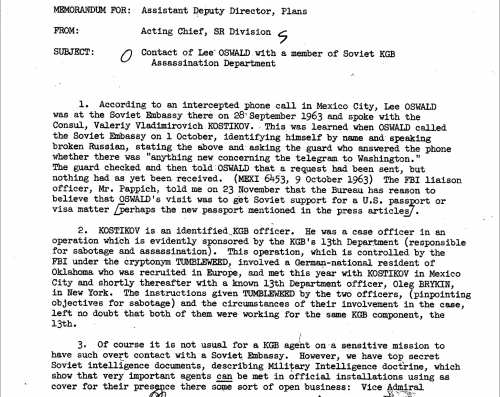 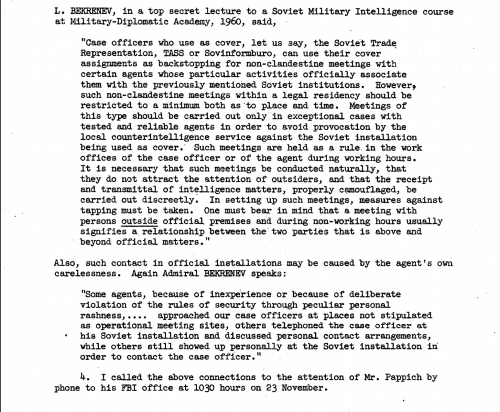 The file noted that Kostikov traveled outside of Mexico City three times to supposedly buy cotton. The State Department said that Kostikov met with people in Movimento Liberation National and central Compesina Independienta, large Communist front organizations. He brought with him Ivan Gavrilovich Alferyev, a PRAVDA correspondent in Mexico, who had close contact with Cuban diplomats and Communist leaders in Quito, Ecuador. Alferyev made contact with Communist sympathizers on these trips, people “who previously had been associated with Soviet officials stationed in Mexico City.”

Arnold Johnson, the PR guy for CPUSA, has popped up a lot, but three files caught my eye and raised a few flags for me because the files abruptly stop when its about to discuss anything that he said.

In one file, an informant met with Gus Hall, the CPUSA General Secretary, in New York City. The informant said that Dallas police leaked that Oswald’s personal effects contained “letters on CPUSA stationary dealing with how he should proceed in his activities in the FPCC [Fair Play for Cuba] and as the informant stated ‘How to Handle Noisy Neighbors.'” The informant said that it became “apparent that Johnson had not revealed the fact that he had corresponded with Oswald.” Johnson explained that he answered three letters from Oswald, one was to a woman and the other to himself. The file ends: “He indicated that there apparently was….”

So as soon as the file was about to discuss the correspondence it just ends. 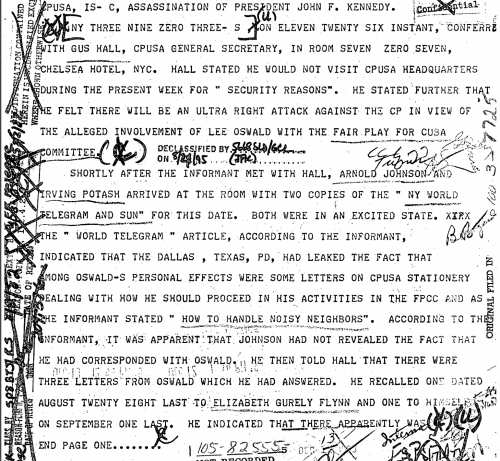 In another file, an informant recounted how she went to CPUSA headquarters and spoke to Jack Stachel, CPUSA district organizer, and Phil Bart, CPUSA national organizational secretary. They told her that the headquarters would remain closed and she would not be needed. They persuaded her not to meet with Hall even though she said she had “numerous things” to talk to him about. So she picked up her dictation notebooks and as she searched these notebooks, “she came upon her shorthand notes reflecting a letter to Oswald” that was sent to him at Irving, TX. “The letter was dictated by Arnold Johnson, and reads as….” Yes, it abruptly ends just as it was going to go into detail about Johnson’s words. 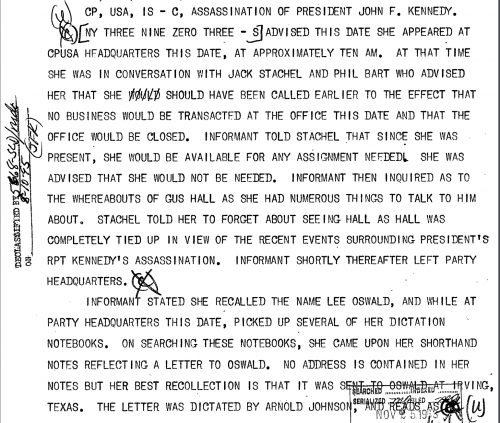 Another file talked about a CPUSA meeting that Johnson presided over in December 1963. He asked the people present if people blamed Marxism or right wing activity on JFK’s assassination. This is how it ends: “Those present they first thought president killed by Marxist but after Lee Oswald was shot by Jack Ruby, they….” 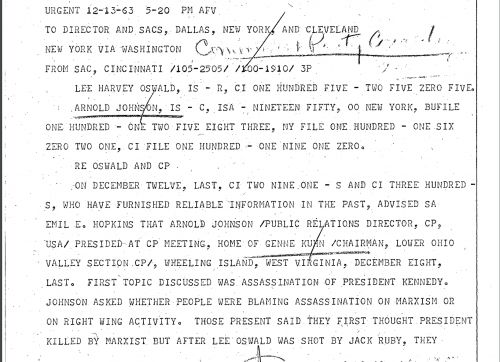 I won’t go all Alex Jones on you guys, but will say these files in particular made me suspicious and wish we had the rest of the pages. Hopefully when the government releases the remaining pages it will include those that belong in these files. I’m going to keep looking through the released files and if I come across anything else I’ll add to this post.

CNN will report that these documents “prove” Oswald was a member of the Tea Party.

Aside from that, an investigation converges if it is moving towards the truth. Do these documents create more questions than they answer? Do we have convergence or divergence?

notamemberofanyorganizedpolicital in reply to TX-rifraph. | October 27, 2017 at 6:06 pm

Going through these documents will be fun. However, it is only going to make the water surrounding the JFK assassination murkier.

The problem with Oswald as the lone gunman has always been that he was the most unlikely person to be responsible, given the “evidence” against him. [maybe I’ll go into that sometime, but not right now]. And, these documents will only make this worse.

Oswald had a CIA connection before he went to Russia. One of the documents
[ https://theconservativetreehouse.files.wordpress.com/2017/10/jfk-files.jpg ]
says that he was “trained” by the CIA in 1957, while seconded to Naval Intelligence, and was active for the CIA in 1959 while in Minsk, Russia. This would explain why it was so easy for him to leave Russia and return to the US in 1961. Then of course, our “communist” LHO immediately joined the FPCC upon his return to the States. This suggests that he may still have been an agent for the CIA at the time of the JFK assassination. Which tends to cast additional doubt that he was the communist loving, lone gunman of limited intelligence that he was portrayed to be following the assassination.

It will only get worse as the shadow world in which LHO lived is exposed.

His widow is still alive and living in Texas, I believe.

I think you’re on to something.

Plus I’ve been struck with how “Oswald” did not “flee” the state; heck he didn’t even flee the city of Dallas…….

Oswald was not dumb.

In short Oswald did not “act” like a man guilty of one of the highest crimes in the nation…..

He identified himself by his name and spoke in broken Russian.

Is the subject here LHO? I thought he was supposedly good in Russian, according to several eyewitness testimonies. The question floating around was how he could have learned to speak near-native Russian during the relatively short time he was in Russia.

Unless, of course, the stuff about a LHO double is true….

So much of the intrigue surrounding the assassination seems to center around the legitimate question of whether Oswald was indeed a staunch communist supporter, or, rather, a CIA-controlled double agent. Not that they preclude the possibility of a person possessing communist sympathies or loyalties, but, Oswald’s Marine Corps background and his being stationed in Japan at a time when U2 flights were originating from there raise the issue of whether he was eventually recruited as a CIA agent. Oswald’s highly-visible pro-communist activities (e.g., handing out “Fair Play for Cuba” pamphlets in New Orleans; his Soviet defection) always struck me as a bit too attention-seeking to be genuine – exactly the type of cover activities that a double agent would engage in for the purpose of selling his communist fervor to the Soviets.

Also, Oswald’s “I’m just a patsy” statement upon his arrest has always intrigued me. Sure, it could be a lie and total misdirection, but, what’s interesting about it is that it’s not an outright denial of guilt, as in, “I’m innocent.” It’s a statement that basically says, “I’m being set up, and, which doesn’t deny the possibility of some involvement in the crime.”

notamemberofanyorganizedpolicital in reply to guyjones. | October 27, 2017 at 6:27 pm

My bets are that the still un-released papers make it all too easy to connect the dots of Oswald being a CIA asset, agent.

You mention the U2 flights, and searching whether Oswald was a pilot or not coughed this up.

“Was I Betrayed By Lee Harvey Oswald?”
http://jfk.hood.edu/Collection/Weisberg%20Subject%20Index%20Files/G%20Disk/Gentry%20Curt/Item%2014.pdf

I wonder how many American politicos are favorably mentioned in those CPUSA documents?

Hillary clinton gets an honorable mention as ‘easy to pay-off.’

But you know the ny times is their fav.

RE: …”these files in particular made me suspicious and wish we had the rest of the pages”….

CIA has never been known to lie now have they……..

Btw, how many years until the ‘obama’ documents are released to the public, and we find out he was born in Kenya, is a Muslim, a communist, never spent a day in Columbia U, was bought and paid for by the Saudis, is a transvestite homosexual, moochelle is a man, and frank marshall davis is his real father?

Communists seem to be rather abundant all over. Check out the Breitbart story on Tinseltown.

Its first president was John Howard Lawson, who shortly after the formation of the guild was named the head of the Hollywood division of the Communist Party USA.
—————

Then there’s our old friend, the ACLU:

ACLU founder Roger Baldwin: “I am for socialism, disarmament, and, ultimately, for abolishing the state itself… I seek the social ownership of property, the abolition of the propertied class, and the sole control of those who produce wealth. Communism is the goal.”

It is said that Lyndon Johnson believed that Cuba was involved in the JFK assassination. I would not be surprised if this comes tumbling out. After all, there had been several CIA-backed attempts on Castro’s life.