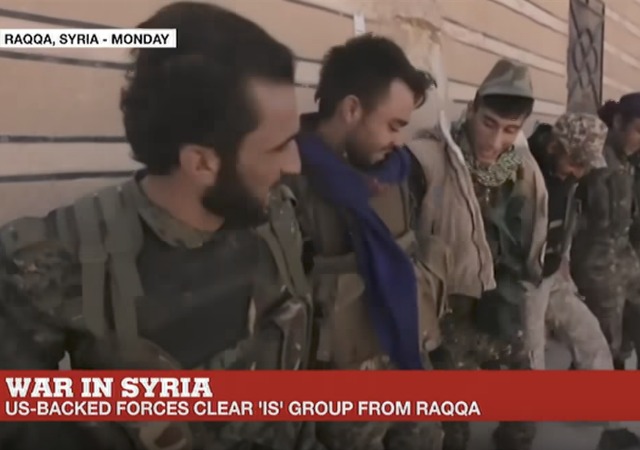 The Islamic State (ISIS) has held Raqqa, Syria, for four years and made it the the group’s de facto capital. That appears to have ended as US-backed Syrian forces have declared they retook the city from the terrorists. From CNN:

“Major military operations in Raqqa are finished but they are now clearing the city of sleeper cells — if they exist — and mines,” Talal Salo, spokesman for the US-backed Syrian Democratic Forces, told CNN. The SDF is a coalition of Arab and Kurdish fighters.

“The situation in Raqqa is under control and soon there will be an official statement declaring the liberation of the city.”

The SDF with “members of the joint Kurdish-Arab force were clearing the city explosive devices and hunting for sleeper cells.” Videos have shown the forces dancing and celebrating in the streets.

The operation to retake Raqqa began in June when SDF advanced “on foot as U.S.-led coalition airstrikes pummeled the militants down below.” ISIS terrorists attempted “a final stand” this past weekend when they launched an attack from the main hospital and stadium.

Ironically, one of the last battles took place at Paradise Square, which is where ISIS preferred to show off its brutality for those who remained in the city. The terrorists announced public executions over loudspeakers and forced the citizens to watch as the militants committed beheadings and crucifixions.

In March 2013, rebels against Syrian dictator Bashar al-Assad took over Raqqa, but these groups eventually splintered. One group named itself the Islamist State of Iraq and al-Sham…ISIS. When more and more people fell in line with this group, ISIS declared Raqqa its capitol of its caliphate as it spread its mayhem and murder into Iraq. They officially took control of Raqqa in January 2014.

Unfortunately the city is ruined. CNN reported that there have been “3,829 airstrikes on the city, 90 suicide bombings and 1,873 victims” while “450,000 people had been displaced.”

1- Game over for ISIS in #Raqqa. They lost capital of their caliphate. Same guys, not long time ago, bragged about conquering Rome. @akhbar pic.twitter.com/ORa8FZmKyy

Woman rips off oppressive garments as Raqqa liberated from IS https://t.co/1hLLnHbFca pic.twitter.com/M9F7LD8SCo

It’s amazing how fast a war becomes “winnable” when your leadership isn’t incompetent.

notamemberofanyorganizedpolicital in reply to Matt_SE. | October 17, 2017 at 1:56 pm

TheFineReport.com in reply to notamemberofanyorganizedpolicital. | October 17, 2017 at 4:15 pm

Traitor barack obama must be in mourning. Literally.

ISIS on the Run Under Trump:
After 8 years of Obama’s lies and failures leading to genocide:
http://www.frontpagemag.com/fpm/268119/isis-run-under-trump-joseph-klein

notamemberofanyorganizedpolicital in reply to TheFineReport.com. | October 17, 2017 at 1:57 pm

Could not agree with you more.

I have to give Trump admin a ton of credit here – I really didn’t think this was possible. Consider me schooled.