“This is the reality of everyday border enforcement” 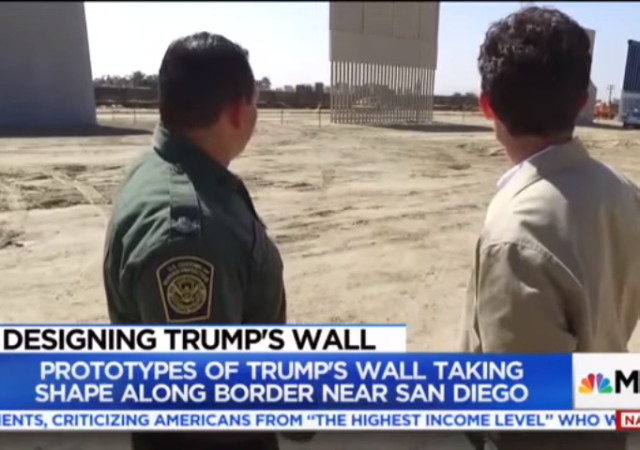 You couldn’t make this up. While MSNBC was doing a report on Trump’s border wall, three illegal immigrants hopped over a smaller border fence and surrendered themselves to border agents.

MSNBC reporter Jacob Soboroff went to preview the prototypes that are being built between two existing border fences along the U.S.-Mexico border. During the segment, Soboroff was interviewing border patrol agent Roy Villareal when several migrants were caught on camera jumping the existing fence into the United States.

“A small group of three people just jumped over in the middle of the day,” Soboroff noted. “So can you explain to me what’s going on?”

This is the reality of everyday border enforcement. The United States is the draw for people with dire situations where they are at,” Villareal said. “We are going to continue to witness this. It plays out on a regular basis for us.”

Prototypes for the border wall are currently being examined for effectiveness. Reuters reports:

Nine months after President Donald Trump took office, the first tangible signs of progress on one of the central promises of his campaign have appeared along the U.S. border with Mexico.

A couple of miles (km) from the bustling Otay Mesa border crossing in San Diego, eight towering chunks of concrete and steel stand as high as 30 feet (9 meters) tall against the sky, possible models for what Trump has promised will one day be a solid wall extending the full length of the southern border, from California to Texas.

Whether any of the eight different prototypes, constructed over the last month, become part of an actual wall remains highly uncertain.

The U.S. Congress has so far shown little interest in appropriating the estimated $21.6 billion it would cost to build the wall.

Still, border patrol officials on Monday welcomed the momentum on Trump’s pledge, which generated a groundswell of voter support that helped elect him to office.

“Our current infrastructure is well over two decades old,” Roy Villareal, deputy chief patrol agent of the U.S. Border Patrol’s San Diego sector, said during a tour with media organizations on Monday morning. “Is there need for improvement? Absolutely.”

“So can you explain to me what’s going on?”

“Yes I can explain what is going on. What you have here is three new Democrat voters crossing the boarder”.

These were not low-intensity invaders. These were real asylum seeking people who crossed WHEN the Border Patrol was passing for the purpose of being put in custody.

It was probably Elizabeth Warren

Any of you idiots down=thumbing want to step up and have the balls to explain?

Be careful what you say. They probably don’t even know if they have balls or not.

Why didn’t they seek asylum in Mexico? Or go to a US embassy and seek it there?

Geez, they still want to come here with Trump as President. Maybe our policy should be a swap instead. We take 100 illegal immigrants for Barbara Streisand and Madonna.

The question no one is asking: Why do Mexico and other countries to our south suck?

Pardon me – but EFF YOU on criticizing the United State on anything. Better yet, start taking some notes on how to make your countries less of a hell hole that your own citizens (who are largely hard working and honest) want to leave it.

You know what. There IS a practical outcome of the border wall.

Go grab those three individuals that just crossed the wall. Find 20 or 30 or their smarter compatriots. Give them a moderate amount of resources, and tell them to try to beat the wall prototypes that have been built.

Failure-mode testing of the existing designs. That’s how you figure out how the illegal-crossers are going to attack the walls and how to make them more robust.