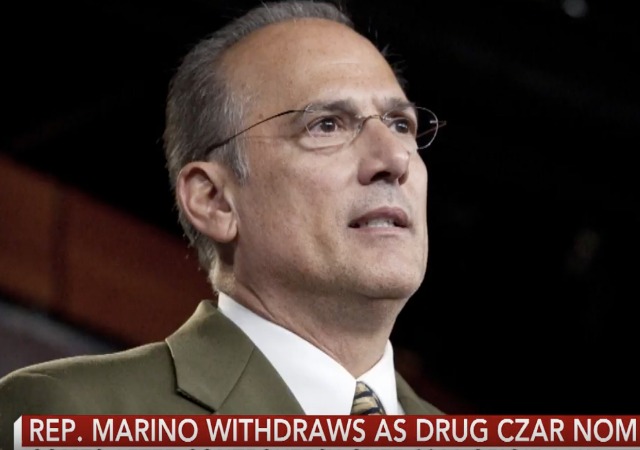 President Donald Trump has announced that his pick for drug czar Rep. Tom Marino (R-PA) has withdrawn from consideration after a report alleges he helped with legislation that makes it harder for the DEA to go after drug companies that allegedly supply corrupt doctors and pharmacies with narcotics like opioids.

Trump said he will declare a national emergency on the opioid epidemic next week.

Marino has served the 10th district of Pennsylvania since 2010. But after this report, the Democrats have come after Marino, stating that he has become “part of a growing scandalized culture among House Republicans.”

(I love how they say that as Sen. Bob Menendez is on trial for corruption and their part is in disarray. The Democratic Congressional Campaign Committee even said that this is just the latest piece that will make it hard for the GOP to keep its majority.)

But I digress. Over the weekend, The Washington Post and 60 Minutes released a report on this legislation that passed in 2016:

The new law makes it virtually impossible for the DEA to freeze suspicious narcotic shipments from the companies, according to internal agency and Justice Department documents and an independent assessment by the DEA’s chief administrative law judge in a soon-to-be-published law review article. That powerful tool had allowed the agency to immediately prevent drugs from reaching the street.

Political action committees representing the industry contributed at least $1.5 million to the 23 lawmakers who sponsored or co-sponsored four versions of the bill, including nearly $100,000 to Marino and $177,000 to Hatch. Overall, the drug industry spent $102 million lobbying Congress on the bill and other legislation between 2014 and 2016, according to lobbying reports.

It only “passed after Sen. Orrin G. Hatch (R-Utah) negotiated a final version with the DEA.” President Barack Obama signed the bill into law in April 2016.

Michael Botticelli, the man in charge of the White House Office of National Drug Control Policy at the the time Obama signed the bill, told WaPo that the DOJ and DEA did not object to the bill.

A senior official within the DEA told WaPo that the department fought the bill for years, but “was forced to accept a deal it did not want” since they knew Congress would sign the bill with or without their support. He said the DEA’s “point was that this law was completely unnecessary.”

WaPo and 60 Minutes have tried to retrieve documents from this time period:

The DEA and Justice Department have denied or delayed more than a dozen requests filed by The Post and “60 Minutes” under the Freedom of Information Act for public records that might shed additional light on the matter. Some of those requests have been pending for nearly 18 months. The Post is now suing the Justice Department in federal court for some of those records.

West Virginia has been hit hard by the opioid epidemic, which is why Sen. Joe Manchin (D-WV) was one of the first to oppose Marino. He is happy with the announcement this morning:

“We need a drug czar who has seen these devastating effects and who is passionate about ending this opioid epidemic. I look forward to working with President Trump to find a drug czar that will serve West Virginians and our entire country, he said in a statement Tuesday. “It’s because of the fine journalists at the Washington Post and 60 Minutes that we have avoided appointing someone who could have made the opioid epidemic even worse. I am eager to make this wrong right and work with my colleagues and the President to repeal this horrible law that should have never passed in the first place.”

Hatch defended his decision (emphasis mine):

Hatch defended his support of the legislation and Marino on Monday, saying in a statement that he “does not believe one flawed report should derail a nominee who has a long history of fighting illegal drug use and of helping individuals with chronic conditions obtain treatment.”

“Let’s not ignore the full story here in the rush toward easy politics,” Hatch added.

This is true. Not many people know this, but I have rheumatoid arthritis. I am one of those individuals with chronic pain, especially in the winter. I also get horrific migraines due to lesions on my brain from my birth. Only opioids can help with that pain.

But due to the addicts those who truly need these medicines to function on a regular basis, these people who far outnumber the addicts, have been punished. We are not addicted to this medicine since it’s an actual need to function properly.

I saw that 60 Minutes show in question. Sounds like they may have stopped a rat just in time. There are bigger players to go after in all this.

As far as I know, Obama was the first president to have all these czars for this or that. If Trump wants to help limit the size and scope of government, no more czars. This should be an office within the HHS department.

Wasn’t the first “Tsar” in DC Mr. Bill Bennett who worked for either Reagan or Bush 1 ?

A) I also have very close relatives who suffer from chronic pain due to illness, and I have a great sympathy for anyone in that condition. That is true suffering, and the medical establishment generally treats them shamefully.

B) for many years now I have seen administration after administration have Czar-this and Czar-that, and I have never seen a single ONE of these so-called “czars” do anything useful for me or for anyone I have ever known. In fact I have never seen one of them do anything besides stick a fancy title on his office door and put his feet up on the desk while collecting a nice fat paycheck.

So it’s hard for me to care much about who ends up in a never-will-do-anything job.

Wrong. The practice goes back to at least the 1930s.

The Russians had a lot of tsars. That didn’t end well.

A lot of money must be going somewhere else.

Maxine Waters’ Campaign Wrote Off Over $10,000 Spent on ‘Hamilton’ Tickets as Fundraising:
http://freebeacon.com/politics/waters-campaign-10000-spent-hamilton-tickets-fundraising/

Now they should go after his co-conspirator Marsha Blackburn – a stooge for the drug companies and the cable companies – to wit, another fake conservative selling out the people. And all of the high-level opiate distributors should be dragged out of the swamp and tried as the drug kingpins they are.

”The new law makes it virtually impossible for the DEA to freeze suspicious narcotic shipments from the companies….”

That’s what they were really upset about.

They can still “freeze suspicious narcotic shipments from the companies” … they just have to demonstrate that there’s “a substantial likelihood of an immediate threat” first.

In high school I worked a 400+ acre ranch. Ranch work is hard work and even at 17 sore muscles were a fact of life. The bosses wife used to rub my neck and back with Absorbine Horse liniment. Worked way better than Absorbine Jr. Here is a link with some info….

My wife survived a terrible car wreck thanks to modern medical miracles. Her survival has left her with terrible debilitating chronic pain and the government, in their infinite wisdom, has now taken some of her pain meds away. Yes they were quite effective, a miracle in themselves, but the government told the doctors and the insurance that they could no longer prescribe these medicines to her and now she must take a weaker form that leaves her sobbing throughout the night asking me to kill her so she won’t have to suffer.
>
So you go to a pain clinic to find help and they treat you as though you are a criminal. For example, they took a blood test and she came up positive for alcohol. The test is so sensitive that it will give a false positive if you used a cleaning agent containing ethanol in the previous two weeks. They knew about the false positive issue, but they refused to believe my wife when she told them that she never drinks and so they treated as though she was an alcoholic. She had to go through counseling, was threatened with AA, and so forth, despite having been using this clinic for over five years and never having a positive test for alcohol before. Govrenment regulations we were told.
>
Once again, the government has screwed up. Instead of enforcing the law and going after the bad doctors, they instead go after the victim and act as though the victim is the criminal. It is the victim who suffers from these new laws aimed at stopping the drug abuse and when these laws do not curb the real abuse, and law violation, they pass even more laws making it even more worse for the bona fide pain victim. It has gotten so bad that many who suffer from chronic pain and who cannot get the medicines they need or used to receive are now turning to the streets for relief. Question: If 95% of those who die from prescription drug overdoses do not have a prescription for the drug on which they overdosed, then how is further regulating the pain patient with legitimate pain and a legitimate prescription going to stop the problem?
>
While this is terrible and unconscionable, this is the overarching strategy throughout Congress – attack the victim, the lawful user, and so forth while ignoring the criminal. If gun homicides are a problem, for example, then pass more laws affecting the legal gun owner that criminals will ignore. Oh, and by the way, don’t call or write you Congressman or Senator. They are brain dead, will not listen to you, and will only spout mindlessly the official line for their job is not longer to represent you, rather that seem to think it is to carry out their orders from on high.