Their deaths are sad, dreadful losses for their families and the entire nation. 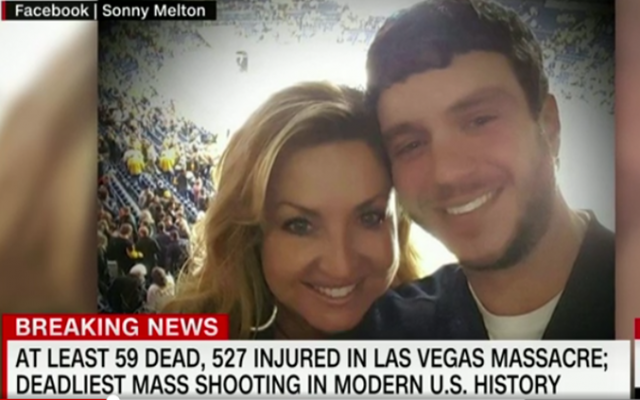 According to the most recent updates, 59 people were killed and 527 were injured after Stephen Paddock opened fire at a packed country music festival opposite the Mandalay Bay Resort and Casino on the Las Vegas Strip.

Details on the victims have begun to emerge, as officials begin the daunting task of identifying victims and notifying the next of kin.

Some heroically sacrificed themselves:

Sonny Melton, 29, a registered nurse from Tennessee, was shot and killed in Las Vegas on Sunday night, according to his place of employment, Henry County Medical Center in Paris, Tennessee.

In an interview with CNN affiliate WSMV, Heather Melton said her husband saved her life amid the gunfire. “He saved my life. He grabbed me and started running when I felt him get shot in the back,” she said.

UTM mourns the tragedy in Las Vegas, & grieves w/ alum Sonny Melton’s family & friends at his death. We pray for healing in the days ahead. pic.twitter.com/qbcyHsKVQP

Others had their personal celebrations tragically altered:

Carrie Barnette [34] was celebrating a friend’s 30th birthday in Las Vegas when she was shot in the chest. She died before reaching the hospital, her mother said.

She was the oldest of three children, and family was her priority, said her mother, Mavis Barnette.

“Beautiful child; she was my firstborn,” Mavis Barnette said. “She was always generous and helping everybody in every way. She loved her nieces and nephews and her sister and brother.

Others were there to reward themselves for working hard.

[Adrian] Murfitt, a 35-year-old commercial fisherman, had traveled to Nevada from his home in Anchorage, Alaska, after a successful season on the water, The Associated Press reported.

Murfitt “was happy to pay some things off and had made some really good money,” his sister, Shannon Gothard, told the AP. He “decided to go out and celebrate and go to the concert and treat himself to something nice and fun.”

Meet Alaska native, 35 year old Adrian Murfitt of Anchorage. He loved fishing & was a mechanic. Friends & family describe him as “a giant teddy bear.” He was murdered last night. pic.twitter.com/ZHpRvhvVJa

The dead also include those who normally protect-and-serve:

Las Vegas Police Officer Charleston Hartfield [34] was off duty when he attended the Route 91 Harvest Festival, one of many law enforcement officers who went to the country music concert. According to the Las Vegas Review-Journal, Hartfield was a military veteran and coached youth football.

The lists from which the names below were compiled can be found Los Angeles Times, NBC News, and UK Daily Mail. They include these additional identities.

Las Vegas shooting victim Denise Burditus, mom of 2 and grandma of 5, died in the arms of her husband of 32 years https://t.co/OINuuQxTFu pic.twitter.com/T8HHUEJhki

Dana Gardner,52. San Bernardino deputy recorded clerk. “She was one of my go to people” said Dutton, of San Bernardino County pic.twitter.com/GvsmcWIhIm

Jessica Klymchuk,34. A libraries and bus driver, mother of 4. Engaged in April to Bret Irla. Worked at St. Stephens school in Canada. pic.twitter.com/6UJLBZ0lEw

Rhonda Lerocque,42. Active member of the Jehovahs Witnesses and worked at Cambridge design firm. Her and her husband Jason helped rebuild pic.twitter.com/niBNkLyayL

Bailey Schweitzer,20. Receptionist at the Infinity Communications and Consulting in Bakersfield, CA. “Bailey was always the ray of sunshine pic.twitter.com/wggwe3x1AC

#LasVegasShooting victim: Susan Smith, office manager who “always had a smile on her face” at Vista Elementary School in Simi Valley, CA. pic.twitter.com/ncf6zE1nGh

This is Jordan McIldoon, from British Columbia, 23. He worked in construction, and was days away from receiving his heavy mechanic license. pic.twitter.com/FaUAe1b2T7

US veteran Christopher Roybal served in a dangerous place like Afghanistan & survived but got killed in Las Vegas deemed the safest place. pic.twitter.com/R0V87na3Wh

As you read the accounts, you can feel the love, joy, and energy that these people shared with others to the last moment. It is difficult to read some of the accounts of their passing without tearing up.

Their deaths are sad, dreadful losses for their families and the entire nation.

I wonder if any of the ghoulish people yammering already about gun laws will even pause for second and personalize this tragedy by relating to these lost souls and their families.

I suspect some of the worst of the progressives taking advantage of this might look at those and do a tally – you know, female to male, skin color kind of tally.

Those people couldnt give a flying f89k about those killed. All these dead represent is an opportunity for them to push their liberal politics upon everyone else!

Additionally I find it interesting that the media has gone silent on the killer about his affiliations and motives. Ive seen a few photos of the guy supposedly at anti-Trump rallies but nothing carried by the mfm at all about this guys background.

Which leads me to suspect this guy was a Democrat voting liberal.

Ive seen a few photos of the guy supposedly at anti-Trump rallies but nothing carried by the mfm at all about this guys background.

Where have you seen these pictures?

In the Aurora, Colorado shootings the press quickly pointed out that a Republican official had the same name as the shooter in custody prior to release of information by police. I keep on thinking about the scene in Minority Report about the “orgy of evidence”….over the top amount of gear in the hotel room. That said, we are discussing a suicide killer….once in that mode nothing is inviolate. As we have seen with jihadists. All these innocent people will fade down to memories while the killer will be forever a poster boy of this issue or that. He violated all of us and will be used to violate us again. We talk of never bending to terror…keeping resolve…and then immediately begin shakeling ourselves.

I don’t think this was politically motivated.

I think this guy was a rich asshole who go tired of high stakes poker and thought it would be fun to shoot a lot of people.

No one can possibly verify any of that so quickly.

As a person approaching retirement, I can say that two million is not enough to live high on. It’s barely enough to live on. You would go through it like butter in Vegas.

Lots of retired NFL players have gone broke in a couple of years trying to live this style.

Well, the POINT was that “the media” IS delving into this, in contradiction to the nutter above.

But, you post a bunch of opinions, at least several of which are simply, objectively WRONG.

I CAN verify property tax records all over the nation in a matter of a few minutes, for instance. And I’m not a pro researcher.

“….but nothing carried by the mfm at all about this guys background.”

You’re the bullshitter. I should be more clear. You’re a liar.

Scott Adams (the Dilbert Cartoonist) posited just last month after an outdoor attack in Europe that we may be reaching the end of Open Air venues.

More horrible by the minute…

Great humble, selfless people – the foundation of our country.

Compare to the spoiled rot in Hollywood and in our schools and ‘news’ working so hard to destroy it.

Reading through the backgrounds of these victims, these people seem so normal and in the prime (or poised to be) of productive, fulfilled lives. This is one of the hardest posts I ever had to write, especially as I began tearing up reading about the 20-year olds who were slaughtered.