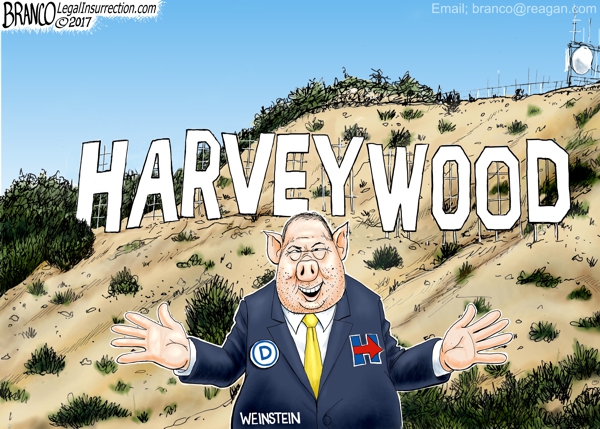 Good one, A.F. Weinstein is clearly a fat pig in real life, too. What could a young woman possibly see in a man like him anyway, other than career advancement? So I guess that would make all those young actresses whores, wouldn’t it? I hope they can live with that knowledge.

The people I blame and fault just as much as Weinstein, and who are far worse than the naive young women who got swept up into this, are Weinstein’s procurers, his apologists, and his enablers.

Men like Matt Damon and Ben Affleck. Politicians like Cyrus Vance, Jr., the New York DA who took a $10,000 bribe (he called it a “contribution” in exchange for dropping a slam dunk sexual assault case against Harvey.

And especially the women Harvey used to set up other women – one of his favorite tricks was to get a young actress to agree to a meeting with him, but with one of his female employees with them, so it appeared completely safe. And then 10 minutes in, it was prearranged that Harvey’s female accomplice would stand up and leave, leaving the young woman alone to fend for herself in a room with Harvey, realizing that she had just been set up.

Harvey didn’t want whores, because that wasn’t fun for him anymore, it was too easy. Harvey wanted the thrill of forcing women who loathed him into performing sexual acts with him, and then getting away with it. It’s all about power, and Harvey had enough to even get the top execs at NBC to tell their organization to back off and say nothing, even when they had the goods on him.

Any fault that the young women involved may have had pales in comparison to the things done by all of the much, much bigger fish in this story.

LOL. Love the pig nose and ears. Really sums this guy up.

Only thing missing is the Obama logo. After all, Harvey was a big Obama donor, and the Obamas entrusted their teen daughter to his tender care . . . .

when you are not raised with religion then there is no ethical base on which to rely on.
the rest is just bs.

From slick Willy, to Filthy Filner to Humping Harvey… there seems to be a common thread in the fight against the War on Womwn

Ironically, Weinstein is married to an attractive younger woman named Georgina Chapman. I am sure that she married such a disgusting ogre for his personality alone.

One small opportunity would have been to use the “I’m With Her” T shirt from the Hillary campaign and spin it a bit.

You must have been reading my mind while I was working on my next toon… Strange.

Perhaps a good one would be to point our her hypocrisy via juxtaposition. It’s Hillary in a T-shirt that says, “I’m With Him!” (similar in style to her campaign slogan) standing with Bill, Weiner, and Weinstein [with arrows].

Ha! Another good one!