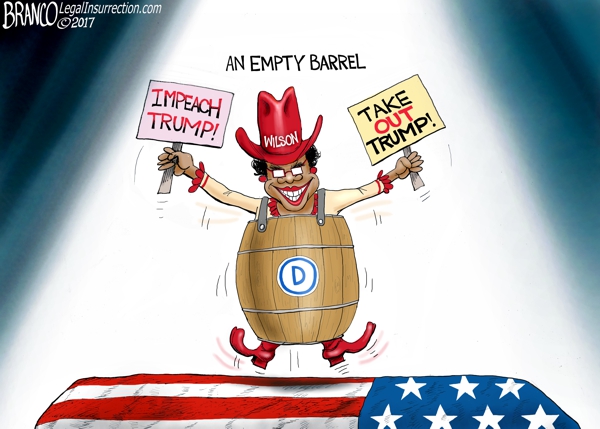 The Dims are the empty barrel. Yup. This is funny/not funny, considering her platform, but (as always) that is exactly your point…
Ty Mr. Branco.

Whaddya bet, if she saw this cartoon, her first thought would be “Hey, my name on my cowboy hats! That’s a good idea!”

The widow was just interviewed this weekend and pretty much supported Wilson’s comments about Trump.

Trump frequently uses imprecise and vague language. When he does his opponents jump on it and interpret it in the worse possible light.

I don’t know or really care what he said to the widow. The fact is that he called her to express his condolences. That’s it. That is what matters.

He did not call her to be mean or to impugn the character of her husband. That’s moronic. He may or may not have been awkward in what he said, but the act of calling to offer his condolences is an act of sympathy. That is what should matter. Spinning it any other way is repugnant noise.

notamemberofanyorganizedpolicital in reply to MaggotAtBroadAndWall. | October 23, 2017 at 11:34 am

May all liars burn in Hell.

smfoushee: The widow was just interviewed this weekend and pretty much supported Wilson’s comments about Trump.

MaggotAtBroadAndWall: The fact is that he called her to express his condolences. That’s it. That is what matters.

That’s what would have mattered, except Trump then lied about what was said, then sent Kelly out, who spread falsehoods about Rep. Wilson.

Actually he did not. But if I was to use your logic, then Kelly’s statements must be true as to what he said about Wilson and her comments at the FBI Building Opening. So which is it. Kelly telling the truth or not! Is Wilson and empty barrel?

Zach That’s what would have mattered, except Trump then lied about what was said, then sent Kelly out, who spread falsehoods about Rep. Wilson.

Come on Zach, you can’t have it both ways. Kelly tells the truth then not?

“Come on Zach, you can’t have it both ways. Kelly tells the truth then not?”

It’s hard being a commie and trying to keep your story straight in the same paragraph.

The democrats commies always dance on the graves of fallen service members.

MarkSmith: Actually he did not.

Actually, he did. Kelly provided the context, what he was once told, what he told the President, and what the President was trying to say.

MarkSmith: Kelly telling the truth or not!

Turns out that liars sometimes tell the truth. In this case, Kelly probably thought he correctly remembered the story about Wilson, but when it turned out he was utterly wrong, he had a responsibility to correct himself. He didn’t, which turned a misstatement into a malicious lie.

Barry: It’s hard being a commie and trying to keep your story straight in the same paragraph.

While Kelly is not a communist, that is a fair description of his comments on the matter. Johnson’s widow confirmed Wilson’s account. Kelly confirmed Wilson’s account. So we *know* Trump lied and has continued to lie. Then Kelly told a story meant to impugn Wilson, which turned out to be flagrantly false. He didn’t correct the record, turning the false story into a lie.

Frankly, Trump should have simply apologized for his clumsy delivery and reiterated his condolences. Instead, he had to lie about it. As for Kelly, if he had stopped with his discussion of the pain associated with death, if he had said what Trump was trying to say, it would have been a great speech. Instead, he had to attack Wilson, a long-time friend of the soldier’s family. He told a falsehood about Wilson, and called her an empty barrel even though she was telling the truth, and he was the person conveying falsehoods.

Frederica Wilson: Trump said, “He knew what he signed up for, but when it happens, it hurts anyway.”

Myeshia Johnson, the widow of Sgt. La David Johnson: “Whatever Ms. Wilson said was not fabricated. What she said was 100% correct… Why would we fabricate something like that?”

Cowanda Jones-Johnson, the mother of Sgt. La David Johnson: “President Trump did disrespect my son and my daughter and also me and my husband.”

Honestly what is wrong with Trump fanatics (I’m assuming that is who down voted my simple fact based comment)? The widow says Wilson didn’t misrepresent the call, so are y’all going to call her a liar? Really? Look, I didn’t say one word about Trump but if y’all now want the bar set at the low standard of simply picking up the phone to make what appears to be the vocal equivalent of a form letter to absolve him of acting a fool then there go right ahead, but I’m not jumping off the cliff with you. I’ll believe the widow until Trump produces the “proof” he claimed he had in an earlier tweet. But I don’t expect he has such proof or that any evidence to support his side of the events will ever come to light, but I also don’t expect those of you who want to defend him in this ridiculous story—of his own making—to ever admit he was wrong and owes her an apology (specifically the widow).

smoushee I’ll believe the widow until Trump produces the “proof” he claimed he had in an earlier tweet.

Good for you, except this is a private matter and is non of your business. It might be about Trump in your book, but it is about respecting a grief stricken gold star parent. The Dems and Wilson push it out there. The cartoon says it all.

As for believing that you would believe Trump if he produced “proof”! BS! I doubt that. The fact that you want him to produce it is disgusting. The matter should be dropped.

The left is trying to create the next Cindy Sheehan. This time, one that they think has “absolute moral authority” just because she is black.

The fact she had a racist hog like Wilson in the car when the call was made is reason enough to doubt every single word she says.

Never forget how the media played the Sharpton and Sheehan show.

THIS is what they showed on the news. Cindy and all of her mourning followers…

THIS was the reality of that shot…

Whaddaya mean, no cattle? Isn’t she a cow?

Turns out that Wilson told the truth, while Trump and Kelly told mistruths.

Well at 11:34 you said Kelly comments were accurate. Sorry Zach, you must be having a Pelosi moment. A little confused are you?

MarkSmith: Well at 11:34 you said Kelly comments were accurate.

We *know* Kelly’s story about Wilson’s dedication speech is false.

I wish that the conservatarian bloggosphere would stop giving this clown the exposure she craves.

Watch the Empty Seats at NFL Games grow – see below.

MarkSmith in reply to notamemberofanyorganizedpolicital. | October 23, 2017 at 4:22 pm

If you really want to troll them, show the Inaugural speech screen shots too. I am popping more pop corn.

notamemberofanyorganizedpolicital in reply to MarkSmith. | October 23, 2017 at 6:20 pm

You mean (and I could totally believe it) there were millions and millions MORE American’s at Trumps Inauguration than Obama’s and Billy Boy’s put together?

I wish you had made the flag draped coffin a little higher and more pronounced to drive that point home.

I can see that, but, when I first looked, quickly, it just seemed like a stage.. Then, when it dawned on me, (snap) the impact was profound. Actually scary.

A.F., that’s the exact mental picture I get when I think of Rep Wilson. Right down to the barrel. Bravo!

The problem with the cartoon is that Wilson is the one who told the truth, while Trump and Kelly lied.