Author Caleb Wilde describes how the business of death saved his life. 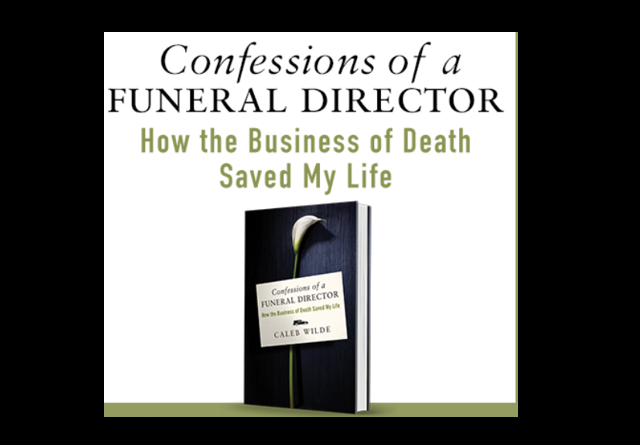 Long-time Legal Insurrection readers know I have a long-time fascination with ancient Egypt.

Specifically, my area of study has been mummification and Egyptian burial rituals. This interest has led me to discover a wonderful website, Confessions of a Funeral Direction – Working the Crossroads and Life and Death, which is authored by Caleb Wilde.

I thought to kick-off the month of October and the season of Halloween, it would be great to review Wilde’s first book, Confessions of a Funeral Director: How the Business of Death Saved My Life, which takes a look at the American way of death through insightful articles that run the gamut from hilarious to profound. This book is the next, natural phase in the “life cycle” of this gifted writer.

Happily, this book is NOT a string of blog posts. Rather, it is a gripping exposition on how Wilde became a funeral director, his challenges while dealing with heart-wrenching tragedies while maintaining an air of professionalism, and how he managed to lift himself from a low point to find the “death positive narrative”. Perhaps the best way to describe Wilde’s approach is spiritual without being sanctimonious.

The only people who may be disappointed by this book are those hoping for gruesome, behind-the-scenes tales of corpse handling. Wilde does cover some of the tools of the trade, and aspects of his profession. However, his focus is on “lessons learned”, especially as it pertains to people seeing the grace in death and how grieving families can positively contribute to burial preparation in a loving, meaningful manner.

Wilde’s father was a fifth-generation funeral director and his mother came from a family that had been in the funeral business for several generations as well. Both sets of grandparents lived in their respective funeral homes and Wilde spent his young days near caskets and ate family dinners in a room that doubled as funeral parlors. In part, the book is an autobiography of Wilde’s processing his thoughts about religion, faith, and end-of-life issues as he matured and ultimately went into the family business.

Each chapter takes a look at a moment in his journey, and what he gained by going through that experience. There are several sections that will leave everyone but the most stone-hearted weeping. On the other hand, other descriptions of Wilde’s professional life are laugh-out-loud funny.

As a sample of Wilde’s story, here is a snippet that struck me about Wilde’s experience collecting the body of an elderly lady who had passed at a nursing home:

What followed next at Luther Acres was one of the most sacred acts I have seen in my short life.

After I had finished transferring Mrs. Taylor onto my stretcher, the nurse pulled out an “honor quilt” that the staff had made. She helped be drape the quilt over the stretcher, explaining that it signified wrapping the body in the love and care of the staff. Then she said, “Wait here. I’ll be right back.”

…”We do an honor walk here. Our staff forms a line along the walls of the nursing home home, from here to the entrance,” she explained.”

I strongly recommend this book for anyone who wants a clearer understanding of today’s funeral industry and what it entails to help people deal with burial/cremation arrangements, as well as those who may need an uplifting read about coping with the loss of a loved one. This is also a marvelous read for personal reflection.

On a personal note, this book has come at a good time. After slogging through the tornado that has become the news cycle, it is refreshing to get some perspective that is not seeped in political drama.

Welcome to the season of Halloween!

Gamut. Runs the gamut, not “gambit.”

Things like this make this editor/homeschool mom’s eyes bleed. Please! Have mercy and fix it. 🙂

My impression of this industry is not favorable. When my father died I accompanied my step-mom on her visits to the funeral director and watched in disbelief as the guy tried to convince her to spend almost $25,000 on a casket. Right as he was about to close the deal I said “show us the cheapest one you’ve got” and I told my step-mom that dad would be spinning in his grave if she wasted one penny on a box that goes in the ground. She spent $2,500 instead of $25,000. No one knew the difference at the funeral and I’m pretty sure it still works.

Well, your impression of the industry is anecdotal and based on n of 1, so there is that.

Have you ever had a bad, overpriced meal?

What about been solicited with a vacation scam like timeshares or “bump” value vacations?

Does that mean the entire food and tourism industries should be looked at unfavorably?

Of course you’re right, and I didn’t mean to impugn everyone in the business. Just sharing my own experience. Funeral directors are in a unique position because they’re dealing with grieving people, a lot of whom are emotionally vulnerable. As a result they can have a profound impact on their customer’s lives… hopefully they use that power for the good.

There’s the advantage in coming from a tradition that insists on everyone being equal in death, and that regards burying the dead not as a livelihood but a vocation, which is ideally performed by volunteers. Jewish funerals aren’t free, but they’re as inexpensive as they can possibly be made. There are no choices to be made; everyone gets exactly the same plain white clothes and shroud, and if local law or custom insists on a coffin then everyone gets the same plain wooden one. So there’s nothing to hard-sell or even soft-sell.