Berlin Police Carry Out Anti-Terror Raid Ahead Of Christmas

Berlin Police Carry Out Anti-Terror Raid Ahead Of Christmas

Berlin Christmas markets to be protected by “rings of steel.” 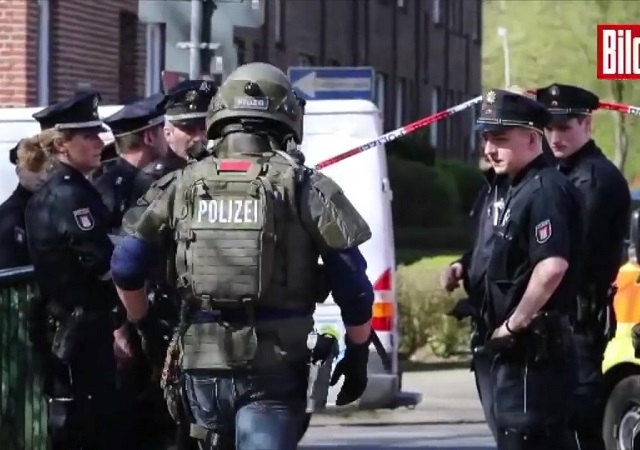 It’s that time of the year here again in Germany. As winter sets in, the first Christmas decorations have started appearing on the shop fronts. Before you know it, the Christmas markets will be coming up in every town and city across the country.

For Merkel’s Germany, however, it is also the time of the year when radical Muslim terrorists target the Christmas markets and innocent shoppers.

Last year, a Tunisian asylum-seeker, who had been on the country’s terror watch list for years, drove a lorry loaded with 20 tonnes of steel beams into a Berlin Christmas market, murdering 12 people and ploughing into 49 others. A week prior to that, a young radicalized Muslim boy had planted a nail bomb at the Christmas market in the western German town of Ludwigshafen. The police managed to defuse that bomb.

Right in time for Christmas, the Merkel government made a very public attempt to wash its hands of the last year’s Berlin Christmas massacre. The state-appointed special investigator pinned the blame squarely on the city police. Earlier this month, the German news website Local reported:

An ex-federal prosecutor tasked by the city of Berlin to look into the police’s surveillance of terrorist Anis Amri found that investigators repeatedly missed chances to stop him before he killed anyone.

The final report by former federal prosecutor Bruno Jost found that Berlin police investigations into Amri before he drove a truck into a Christmas market last December were “full of mistakes” “insufficient” and “unprofessional.”

The report made no mention of the country’s criminally flawed immigration policy that allowed this ‘asylum seeker’ to be in the country in the first place.

Reacting to the incident in Ludwigshafen, Michael Stürmer, a columnist for the German newspaper Die Welt, wrote a passionate piece titled: “Now the Terrorism is Recruiting Our Kids Too.” To be fair to Herr Stürmer, he is not the only one suffering from an intersectional identity crisis. The former Dutch Prime Minister Guy Verhofstadt, echoed the same sentiment when he responded to the November 2015 Paris attacks, saying, “These terrorists are our children.”

The fact that European elite have been pushing for unregulated immigration from Arab and Muslim countries without bothering to have any kids of their own, very much sums up the irony of this moment in history.

This Christmas, the police is gearing up to prevent an Islamist blood bath on German streets. Berlin Police carried out a massive raid, arresting a suspected Islamist and seizing a huge weapons haul in the heart of the German capital. Die Welt reported:

A 40-year-old man linked to the Islamist scene was arrested in Berlin’s Kreuzberg district. During the raid that took place Wednesday night, the investigators confiscated several hand guns, rifles and 20 to 30 boxes of ammunition of various calibers, police and state prosecutors confirmed. They recovered around 20,000 ammunition rounds in total.

The suspect has been charged with the violation of [German] Weapons Act. He is to be presented before a magistrate.

There were reasons to believe that the weapons “could have been used in terror attacks”.  So far, “there were no details on a concrete terror plot,” the police and the prosecutors  revealed. The suspect, a German citizen of migrant background, had been under surveillance for months. [Translation by author]

Meanwhile, the Berlin police are undertaking massive security measures ahead of the Christmas season to prevent vehicular ramming attacks, a preferred Islamist terror tactics in recent years. The UK newspaper The Telegraph reported earlier this month:

Christmas markets will be protected by “rings of steel” this year as security is bolstered at events across Britain to prevent Berlin-style copycat terror attacks.

The Telegraph understands the Local Government Association has warned councils to be vigilant and has encouraged them to follow government guidance in protecting areas susceptible to mass casualty atrocities.

This includes installing obstructions such as concrete bollards in pedestrianised areas to prevent heavy vehicles driving into crowds of people – similar to the attack carried out in Germany’s capital last year, where 12 people died and a further 56 were injured.

And the irony of it all is that a country that refuses to close it borders to uncontrolled immigration from Arab and Muslim countries ends up resorting to medieval siegecraft to ensure a safe Christmas. German Chancellor Angela Merkel who leads the global chorus of “build bridges not walls,” is building walls around Christmas markets and pedestrian zones across the country.

If Germany celebrates only Muslim holidays then everything will be fine. It is the only reasonable thing to do and promotes inclusiveness. now where is that “sarc” key….

why /sarc – it is truth that needs /sarc

they reap what they have son – if the electorate keeps mama merkel in office then obviously approve.

the reason that the Euros want/allow this invasion is that they don’t have children and need someone who will pay the taxes for their lavish retirements.

when will they codify polygamy and child brides ?

we will deep vet ‘european’ visitors and immigrants of a ‘peculiar’ belief system.