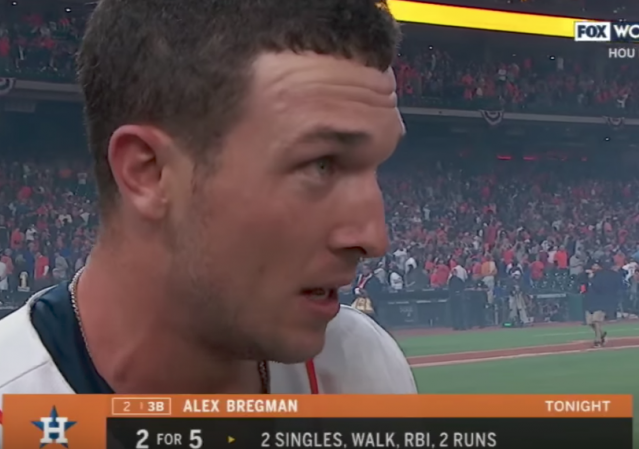 This has been one heckuva World Series so far. Add Houston infielder Alex Bregman to the list of firsts this series has produced.

Houston Astros infielder Alex Bregman notched the first-ever walk-off hit by a Jewish player in the World Series when his RBI single drove home Derek Fisher to lead his team to an epic 13-12, 10-inning win over the Los Angeles Dodgers.

After the five-hour-plus game, which lasted into early Monday morning on the East Coast, Houston leads the series 3-2.

The Dodgers scored three runs in the first inning and held a 4-0 lead going into the bottom of the fourth. The home-team Astros tied it, then fell behind, 7-4, then tied it again, 7-7, then fell behind , 8-7.

The Astros took the lead, 11-8, in the bottom of the seventh, added one more in the eighth, and needed just one out in the ninth inning when the Dodgers rallied to tie it 12-12. Bregman’s game-winning single came with two outs and the winning run on second base. He also singled and walked in six plate appearances, scoring twice.

Bregman isn’t the only Jewish player making headlines in the World Series. In Game Four Saturday night, Dodger Joc Pederson’s three-run shot in the ninth extended the Dodgers’s lead to 6-1. That was followed in the bottom of the inning by another Bregman homer, bringing the final score to 6-2. Both players have homered twice in the series.

I had been playing tennis with a friend at a LA area country club when Hank Greenberg, first Jewish MLB player took center court. Everyone stopped, turned and watched.He was already an alter kaker and did not play super aggressively. His range of motion may have been compromised by age but the fluidity of those motions were truly amazing to watch.

And…? The point? Jews have been playing pro baseball for decades. Plenty of greats before Bregman. Sandy Coufax. The Sherry brothers were Jewish if I remember right.

Speaking as someone of Jewish heritage, I say we don’t need any gold stars on our report cards for being “the first Jew to [insert accomplishment or happened-to-be-there…]” recognition.

I don’t know about other Jews, but I just want to be an American like my Christian and Hindu neighbors.

Bregman has a strong following on our little island where his uncle , a former business partner of mine, lives and has been talking him up since Bregman started college. His uncle, same last name, was also a great college baseball player.,

This article is like the scene from the mouse on the moon when the Brit commentator had to add that the watch worn by one of the crew members was British made. It’s not really worth a mention except by maybe his mom.