Astronomers Witness Collision of Neutron Stars for the First Time

Astronomers Witness Collision of Neutron Stars for the First Time

So this is how gold and platinum came about in the universe! 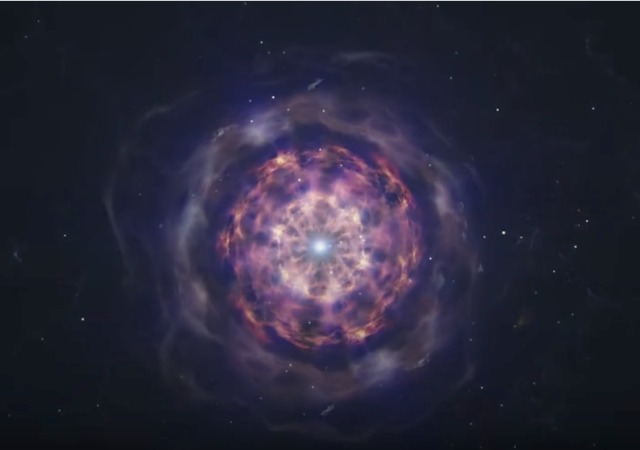 Astronomers have witnessed the collision of neutron stars for the first time and discovered that it created gold. They have concluded that gold, platinum, and uranium are the result of these collisions. From The Wall Street Journal:

“Gold is forged in the nuclear furnace of neutron star collisions,” said astrophysicist Duncan Brown, who studies gravitational waves at Syracuse University and who was involved in the effort. “In the strictest sense of turning matter into gold, this is where alchemy happens.”

The researchers said it marks the first time any cosmic event has been seen both with gravitational waves, which are produced when massive objects such as black holes stretch and squeeze the fabric of space and time, and with the full electromagnetic spectrum, from gamma rays, X-rays and radio waves to infrared, ultraviolet and visible light.

“This is a new kind of astronomy,” said physicist David Reitze at the California Institute of Technology, who is executive director of the $1.1 billion U.S.-based Laser Interferometer Gravitational-wave Observatory, or LIGO, which caught the first signal from the merging stars. While optical astronomy is almost as old as humankind, gravitational waves were detected for the first time in 2015. Earlier this month, three scientists who conceived and managed the LIGO detector received the Nobel Prize in Physics for their work.

Created in the collapse of a supernova, neutron stars are the smallest densest stars in the known cosmos—so tiny that the two scrutinized in the new studies were each about the size of Manhattan, so heavy that each contained more than the mass of the sun, and so compacted that a spoonful of their exotic essence likely would weigh more than a billion tons, the researchers said.

Normally, neutrons stars are too faint to be detected from Earth. But as these two spiraled together—barely 200 miles apart and traveling at about one-third the speed of light—they triggered gravitational shock waves that rippled across the sea of space and time, said gravitational wave researcher David Shoemaker at the Massachusetts Institute of Technology, who is the spokesman for the LIGO Scientific Collaboration.

Carl Sagan had a discussion of astronomical alchemy in one of the episodes of his Cosmos series more than 35 years ago. He mentioned that heavier elements found in the periodic table are commonly formed when a star goes supernova. I imagine the collision of two neutron stars could be just as eventful.

My wedding ring just got bigger!

It takes a lot of faith to believe this article!