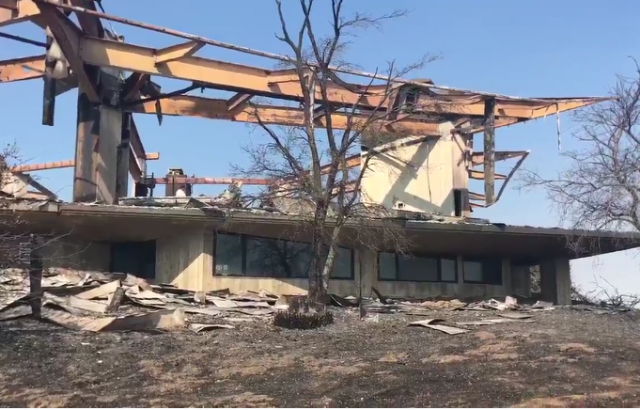 In the course of the past week, the Wine Country Wildfires have incinerated more than 200,000 acres, obliterated or damaged more than 5,500 homes, and displaced over 100,000 people. The current death tool stands at 41, including a private contractor who was bringing water to fight the blazes when his vehicle rolled over.

“He was helping to fight the fires and do the right thing,” said CHP Capt. Mike Palacio. “Unfortunately, at this point, we don’t know what happened.”

…“This has been the deadliest week that we’ve experienced here in California… from wildfires,” Cal Fire spokesman Daniel Berlant said Monday.

Sonoma County officials report that a suspect has been arrested for arson in connection to the area’s blazes.

The arson suspect is Jesus Fabian Gonzales, 29, Sgt. Spencer Crum, a spokesman for the Sonoma County Sheriff’s Office told CNBC. Crum described him as “a transient out of Sonoma” and said the suspect was “arrested for setting a small fire in a park in Sonoma on Sunday.”

Speaking at the Tuesday afternoon press conference, Giordano said the arson suspect was seen “walking away from a small fire” and stopped by deputies. Also, the suspect allegedly had “a fire extinguisher and a lighter with him,” said the sheriff.

This is at least good news for California’s largest electric utility company, which has seen its stock plummet over concerns it could be found liable for the fires that have ravaged Northern California.

..PG&E said in an SEC filing Friday it has “$800 million in liability insurance for potential losses that may result from these fires. If the amount of insurance is insufficient to cover the Utility’s liability or if insurance is otherwise unavailable PG&E Corporation’s and the Utility’s financial condition or results of operations could be materially affected.

The magnitude of the property loss is historic, and includes the loss of the iconic “Glass House” mansion.

A San Francisco Bay mansion with enormous glass walls set upon one of the Bay Area’s highest privately owned peaks has burned to the ground in the recent wildfires.

The home nicknamed the ‘Glass House’ at 1700 Twin Sisters Road in Fairfield, which is close to the border of Solano and Napa counties, was destroyed by the flames last week.

…The hexagon-shaped building which cost $17million to construct, complete with helicopter pad and 50-foot-long swimming pool, was one of many well-known landmarks that was reduced to ashes in fires that have blackened more than 182,000 acres and destroyed more than 5,700 structures.

Currently, 22 wineries in the heart of California wine country have been damaged or destroyed as well.

CA has over thirty fires stretching over some 630 miles. It will tough to pin them all on this guy.

That’s what I was thinking – obviously arsonists are bad, but there are ALWAYS some of these guys around, at any time, in any society. As the saying goes, some men just want to watch the world burn.

BUT focusing on one arsonist and making him the nexus of all evil serves to hide the fact that when good land management policies are followed, when brush is cleared, when controlled burns are utilized when appropriate, then an arsonist will never be able to do huge amounts of damage.

California’s land management policies over the last decade have been the equivalent of filling barrels up with gasoline and leaving a pack of matches on a table nearby with a note saying “light me”. This is WHY a state encourages good land management policies, rather than idiotic ideas based on “oh nature always knows best, man should never interfere”.

You let nature do what she wants, well she is gonna burn down everything you own every chance she gets. And don’t be surprised when a few people like this sad sack they’ve arrested want to help.

This makes no sense. At least without a specific date of the arrest. “Sunday” as in two days ago, does not link this person to fires that have been burning for weeks. And there is no indication that he was anywhere near the point of origin of any of the fires.

And Leslie should have considered these things before putting up a story suggesting that someone responsible for the entire disaster has been identified and arrested. Following a CNBC item without taking the time to verify the sources is dangerous and can lead to shark-jumping.

Gov. Moonbeam announces that the English translation of the suspect’s name is indeed Climate Change.

And he obviously voted for Trump.

Betting he was illegal

Most of the grapes have been harvested except for the Cabernet which probably has been smoked all to hell. Watch some wine entrepreneur come up with a label like: “Wildfire Red. A bold and vibrant Cabernet with autumnal hints of friends around a campfire.”

I worked on the glass house. The original owner was a true blue Libertarian. He started and owned a convenience store chain in California called “Liquor Cheaper.” the chain may have extended into Oregon and Washington at one time. He sold all of it and retired. I forget his last name. Maybe surname Roscoe? He and his lovely wife treated all of the construction workers with respect. His wife would serve up sandwiches and snacks once in a while. I think both were depression era children, at least of WWII age. Well, anyhow, he was famous for suing local and state officials.

I’d like to address the notion that if California would’ve adopted a sane forest management best practices approach that we could’ve avoided the Santa Rosa fires.

1) Satellite view of Annabel state park reveal a network of dozed fire breaks. One of the dozed firebreaks is HUGE. More. The same satellite view shows that homeowners have cleared brush and grass along their fencelines bordering the refuge.

3) This is something non-California residents don’t know about. The hills in that zone are home to huge patches of poison oak. So what? Prescribed winter burns. The smoke emitted from burning poison oak contains the toxic oils. Inhaling poison oak oils causes severe respiratory/lung siezures.

Many people are hyper allergic to poison oak, and they don’t even know it, because they haven’t come in direct physical contact with it. But in aerosol form? They dont egen know that they’ve been dosed via wildfire smoke.

4) The windstorm was particularly fierce. Wind was gusting to 70MPH on Sunday.

4) People are blaming PG&E for failing to trim branches near powerlines. Bleh.

“This is completely false, bad, wrong information that Breitbart started and is being put out into the public,” a Sonoma County sheriff’s spokesman said.

“There is a story out there that he’s the arsonist in these fires,” Sonoma County Sheriff Rob Giordano said at a press conference Tuesday. “That’s not the case. There’s no indication he’s related to these fires at all. … I wanted to kill that speculation right now, so we didn’t have things running too far out of control.”

The rumors flared after officials arrested a 29-year-old man in Maxwell Farms Regional Park last weekend. Jesus Fabian Gonzalez, a homeless man “known to deputies,” had started a fire to keep warm, Giordano said Tuesday. Gonzalez, who frequented the park, was seen “walking away from a small fire” on Sunday afternoon carrying a fire extinguisher and lighter, the sheriff said.

Gonzalez is currently being held in Sonoma County jail on a $100,000 bond, and there is no evidence linking him to the dozens of wind-fueled fires that erupted last Sunday, torching nearly 200,000 acres across the region.

The cause of the wildfires, which are still burning across multiple counties, is still under investigation.