George Washington University YAF: “GW YAF is not affiliated with these posters in any way, shape, or form” 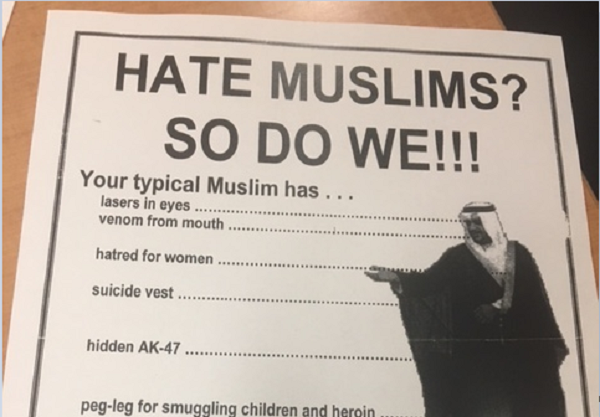 It’s hard to be shocked these days by the tactics of the anti-Trump, anti-America “resistance” and its campus lackeys, but this blatant, intentional misrepresentation of a conservative organization by leftists on campus is appalling.

Young America’s Foundation was notified by administrators at George Washington University that fliers were being distributed on campus that egregiously misrepresent the YAF.

Administrators at The George Washington University notified GW YAF that shameful fliers had been posted on campus, made to look as though they were part of a GW YAF activism project. Of course, these ridiculous posters that attempt to paint all conservatives with a broad brush of racist xenophobia have no connection to GW YAF, and are just the latest attempt by disgruntled leftists to slow the advancement of conservative ideas at GW.

The problem is, this cheap trick was already foiled back in 2007 when leftists attempted to smear GW YAF’s name, but ultimately failed.

GW YAF issued the following statement in response to the resurfacing of the posters:

“On Friday, members of GW YAF were made aware of an Islamophobic poster hung around various campus locations, with our organization’s name on these posters.

GW YAF is not affiliated with these posters in any way, shape, or form, and we are disgruntled by their contents. Targeting a religion and attempting to defame another organization in doing so is childish, revolting, and distasteful.

Authorities at GW are looking at security footage to identify those responsible. 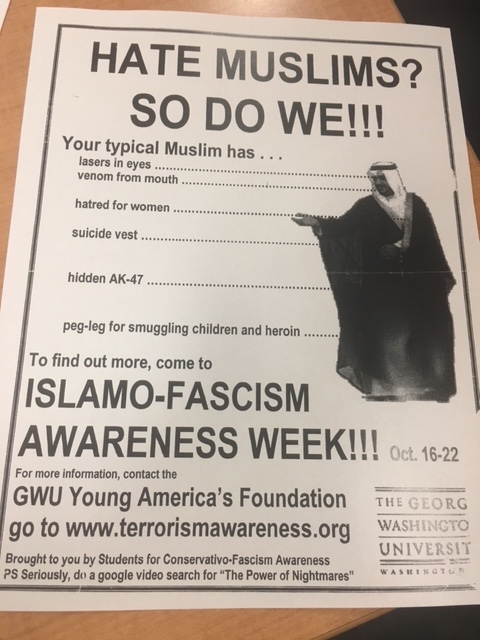 “Authorities at GW are looking at security footage to identify those responsible.”

Wouldn’t surprise me if it was one of the school administrators.

notamemberofanyorganizedpolicital in reply to Conservative Beaner. | September 9, 2017 at 1:01 pm

Of course they very well could have been assisted by the AP.

I prefer to call the AP Un-indited Criminals! SNARK!

PersonFromPorlock in reply to notamemberofanyorganizedpolicital. | September 10, 2017 at 11:55 am

PersonFromPorlock in reply to notamemberofanyorganizedpolicital. | September 10, 2017 at 11:57 am

PersonFromPorlock in reply to notamemberofanyorganizedpolicital. | September 10, 2017 at 11:59 am

Incidentally, you need an ‘edit’ function.

There is no one that fears and loathes Muslims, Christians, Jews, etc. than left-wing ideologues who were defenders and advocates of social justice adventures (e.g. elective wars, regime changes) in national Muslim nations (many resource (e.g. oil) rich), Republic of Ukraine, and Obama’s trail of tears leading to left-wing fiefdoms.

The left will do anything to smear/destroy anyone who stands against them. Be warned.

A search for “Students for Conservativo-Fascism Awareness” (named as a sponsor at the bottom of the poster) turned up this: http://sncfa.blogspot.com/. Note the 10/31/07 entry.

notamemberofanyorganizedpolicital in reply to MTED. | September 9, 2017 at 1:30 pm

And the same thing happened at GWU five years ago: http://www.foxnews.com/transcript/2007/10/11/lsquoislamo-fascism-week-leads-campus-outrage.html.
Why is the administration treating this as something new?

Of course, these ridiculous posters that attempt to paint all conservatives with a broad brush of racist xenophobia

Hey, Fuzzy. It seems you readers. or at least those who comment. seem to have missed the point. They seem quite willing to paint all liberals with a broad brush. Was your point that conservatives are unfairly stereotyped, but liberal really are all alike and can be stereotyped?

The left will do anything to smear/destroy anyone who stands against them. Be warned.

Wouldn’t surprise me if it was one of the school administrators.

Your readers don’t seem to be very bright.

Snake Oil: “Your readers don’t seem to be very bright.”

Complaining about a broad brush?

Did you not notice that I quoted SPECIFIC COMMENTATORS? I was doing the opposite of painting with a broad brush. You simply didn’t comprehend what your read.

Hence, you are not very bright. QED

You referred to commenters with a broad brush, and then gave a couple of examples. You are not only not very bright, you are dishonest.

Fuzzy only wrote two sentences. One of them contains the point of the post. Let’s see if you can figure out which one.

cultural Marxists are allergic to logic, and are morally shallow and narrow, being insensitive to loyalty, authority, and sanctity:

I am not a cultural Marxist. I never was – ever. I am a liberal who believes in personal freedom.

I am logical to a fault. I am a computer scientist and computer consultant. Try being illogical at that and suceeding. You and your fellow travelers are the narrow ones.

My friends and family find me loyal.

You are in no position to judge my morality or whether I am shallow.

You got one thing right. I am opposed to any system based on “Faith, Revelation and, especially, Authority”. I question authority – always.

“You are in no position to judge my morality or whether I am shallow.”

Sure they are, because they bother to read what you write, and evaluate it.

Your writing is poorly reasoned and even more poorly informed. In case you misunderstand your audience here, this is were the grownups hang out, and in this crowd, inflated claims about the nature of your day job are a singularly unimpressive faux pas.

You say your are a computer scientist and a consultant it doesn’t mean you’re smarter than the rest of the crowd. For all I know you are living in your parents basement playing with yourself.

Maybe you do write code for a major company such as Google writing algorithms to block conservative speech and opinions.
All I know If you need to back up your post with your unconfirmed credentials then your statement is weak.

Logic doesn’t exist along a spectrum of more logical and less logical, and ‘logical to a fault’ makes no sense at all.

Since you self-perceive as intelligent, please explain what too logical, or logical to a fault, means. Give us an example.

In this thread, YellowSnake gets #triggered

With every post you demonstrate that cultural Marxists are allergic to logic, and are morally shallow and narrow, being insensitive to loyalty, authority, and sanctity:

Thank you for constantly reminding us.

My response to you went to Max17 by mistake. You did get one thing right.

Hey do you realize that the Founders of this country questioned authority and were supremely disloyal to their king. I am proud to be put in the same class with them.

You might appropriate the Gadsden flag, but you have no idea what it means.

You cannot win. You can cause this great national to collapse under morally bankrupt ideas and untruthful mythology, but you can’t Make America Great. It already is Great in spite of electing a grifter like Trump.

They didn’t question it without reason.

“No taxation without representation!”

Liberals, on the other hand, are just pissy because they lost an election despite having every advantage possible because they decided to nominate the worst candidate in 100 years.

If we learn nothing else from this guy, we learned inmates have access to computers.

Never knew that, did you? Probably an old barry policy still in place.

As usual, you are so original.

Thanks for your comment, YellowSnake. I would put LI readers’ intellect against yours any day of any week. I’m not a gambler, but I know a sure thing when I see it.

It was a political science professors class project.

Lol as studies have shown when felons vote … They vote democrat