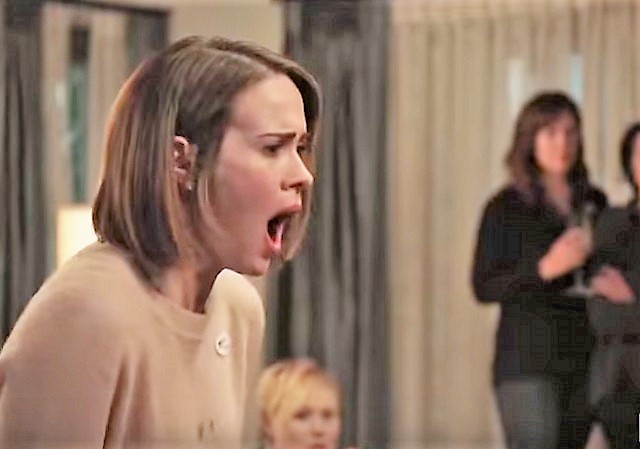 What is it about people who work in the entertainment industry that makes them think anyone is interested in their politics? The “American Horror Story: Cult” series premiered this week and was a little heavy on the “resistance.”

If you’ve been wondering what it might have felt like to be a fanatically left-wing woman in the months following President Trump’s election, the first episode of American Horror Story: Cult gives you an inkling. Our protagonist has visions of killer clowns nobody else can see rampaging through the supermarket on scooters while she haplessly lobs bottles of rosé at them.

Dark? Meh. Disturbing? Not really. Hilarious? Now you’re getting the idea. “This is just like what happened to me in college after 9/11 when I couldn’t leave my apartment!” complains the woman. Yep, there’s a sure sign that you’ve completely lost touch with reality.

The seventh season of the FX Network horror anthology series, which has a different storyline each year, seems to be the first major Hollywood production to grapple with the Trump presidency on TV or at the movies. It kicked off this season’s opener on September 5 with news footage of then-candidate Donald Trump and — what’s her name? The lady who just assumed she was going to beat him?

It segues into what election-night television coverage looked like from two living rooms in a posh suburb in Michigan. In one, a psychotic blue-haired freak who looks like the kind of guy who would make the Joker slightly uncomfortable joyously watches Fox News: “The revolution has begun!” he crows, and “F*** you, world!” and “U.S.A.! U.S.A.!” This is the bad guy, if you were wondering.

Here’s the trailer. Kyle is not exaggerating:

So how did the show do in the ratings? Not great.

Joseph A. Wulfsohn reports at Mediaite:

The latest and politically-charged season of American Horror Story had its weakest debut in five years.

The story AHS: Cult surrounds Sarah Paulson‘s character, whose numerous phobias including her fear of clowns worsens after Donald Trump shocked the world and won the 2016 election last November while at the same time a cult of scary clowns begin a murderous rampage in her town.

This week’s premiere was the worst kickoff for the FX anthology series since its second season back in 2012. American Horror Story: Asylum drew just 3.85 million viewers. The weakest premiere to date is still the 2011 series premiere, which has since been coined as Murder House, that drew 3.18 million viewers.

Do you think the show’s creators have any idea why it’s bombing? More importantly, do they care?

Blue hair at Trump rallies everywhere….what a joke, they were probably trying to invoke the theater shooter a few years back who was an avowed liberal/anarchist.

There must be many people on the left who think this is the American version of the rise of the Nazis. These are the same people who think Obama’s tenure was “scandal free.”

notamemberofanyorganizedpolicital in reply to Matt_SE. | September 11, 2017 at 12:32 pm

Obama was a regular old Muslim Nazi if you ask me!

There is plenty of market for lefty entertainment, plenty of on-board corporations who will spend commercial ad money there, and at least a plurality of customers who don’t care enough to boycott or don’t notice the bias in the first place. Of course, a considerable minority of customers agree with it and like the confirmations of belief.

There is also a secondary, non-monetary, ‘profit’ – the applause and backslaps from fellow Hollywood producers of lefty-laden entertainment. They’ve made an industry of virtue-signaling.

“What is it about people who work in the entertainment industry that makes them think anyone is interested in their politics?”

This failed show is simply a variant of Pauline Kael’s famous remark about her insular life, “I can’t believe Nixon won. I don’t know anyone who voted for him.”

While that quote is said to be just a story, it does encapsulate leftist “thinking” (such as it is).

Her real remark was said to be, “I live in a rather special world. I only know one person who voted for Nixon. Where they are I don’t know. They’re outside my ken. But sometimes when I’m in a theater I can feel them.”

The “debunking” of that quote is more nitpicking by the left. Kael may not have said the exact words quoted, but they are an accurate representation of her feelings.

I watched first 10 minutes. I thought it was hilarious watching all the crying and hysteria at President Trump’s election. And when the one guy put cheetos in a blender and covered his face with it I couldn’t help but think of Rags.

That’s because I live rent free in your hateful, cultist’s shit-packed skull.

Always fun to have you come out of your troll hole…!!!

Your constant need to reinforce your juvenile negative image is pathological. XOXO

Bet you can’t stop yourself from another rant in response to this post.

Garybritt: I can’t hit reply because the function doesn’t exist on the mobile site. Be assured I burst out laughing when I read your last sentence.

I profess my ignorance on t.v. ratings. How did the people know it was going to be political before watching it? If there was cause and effect, I would have expected it to start in episode 2. Was it advertised as anti-Trump?

So many more people were likely to check out the trailer to see what the topic for the new season was going to be than for a ‘normal’ show.

And the trailers for the new season pretty explicitly showed it to be a tone-deaf political statement. Seriously go watch the trailer on YouTube. It’s freaking HILARIOUS (unintentionally).

It always has a liberal political bent. I knew exactly where it was going when I saw the ads.

this story is unpossible: i have it on good authority that Hollywood does NOT have a liberal bias, and you’d be deplorably uninformed and wrong to think otherwise. 😎

Well i thought it was pretty good when she screamed in horror when they announced Trump won i always liked reality TV … That night … That wonderful glorious night … I heard it …. Every liberal in the country screamed i heard it … They havent stopped

In all fairness, any show is going to shed viewers after seven seasons. It would be instructive to see the ratings graph over time, as well as the ratings of whatever shows were airing opposite the premiere. The increase in cable cutting over the past 12 months is also a factor.

I remember this site getting huffy about Last Man Standing getting cancelled after six seasons, despite the exact same situation: a show that had run too long and was bleeding viewers.

Last Man Standing was the second most popular show they had in their lineup and they canceled it for political reasons period, of because it was past the due date.

The reason this character is afraid of clowns is because she watched previous seasons of this show American horror story!!