Trump Will Divide $1 Million Between 12 Charities for Harvey Relief

Trump Will Divide $1 Million Between 12 Charities for Harvey Relief 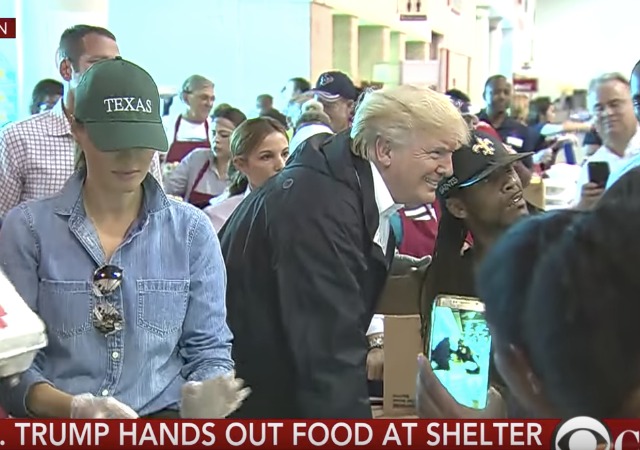 President Donald Trump and First Lady Melania have decided to take $1 million of their own money and split it between 12 charities that have been helping with Hurricane Harvey relief.

The largest recipients of the funds are the Salvation Army and Red Cross, each of which is set to get $300,000, according to the White House.

The couple will also donate money to the ASPCA and the Houston Humane Society. The rest of the money will go to Reach Out America, Direct Relief, Habitat for Humanity, Portlight Inclusive Disaster Strategies, and Team Rubicon.

On August 31, Press Secretary Sarah Huckabee Sanders announced during the press briefing that the president wanted to become personally involved in relief efforts and donate $1 million of his own money.

Of course left wing groups jumped on the opportunity to paint Trump as a bad guy, raising doubts that Trump would actually do this or if the money would instead come from the Trump Foundation.

The Trumps first traveled to Texas after Harvey dissipated, but stuck to Austin and Corpus Christi instead of Houston because he did not want to disrupt the cleanup in the country’s fourth largest city.

They returned last Saturday to meet with evacuees and rescuers in Houston. Trump shed his tough guy act and became more personal with everyone as they handed out meals to those who sought shelter at NRG Stadium. From ABC News:

During the stadium visit, the president at one point chatted with members of the press, and spoke optimistically about the recovery effort and what he’s seen, saying “things are working out well,” and that the recovery effort has been a “beautiful thing” for the country.

As Trump walked around the center, he stopped to chat with victims and volunteers, posing for selfies and flashing his signature thumbs up for the cameras. The first area that the president visited seemed to be a play area for children. At one point, a young child ran up to the president and gave him a hug. A few other kids joined in, and the president lifted one up in his arms for a moment.

The Trumps visited First Church in Pearland, TX, just outside of Houston where they loaded trucks and vans with supplies.

Trump told the other volunteers that he likes “doing this.”

My wife and I watched last weekend’s lengthy video of the Trumps serving up food 3 times. To us it was a joy to see them interacting so positively with so many deplorables of various backgrounds.
Of course, we are told, whenever either of the Trumps is doing something obviously right, the action has a sinister motivation.
The constant and shrill criticism of Trump from both the right and the left is driving me to lump them all together. There is not much of a difference to me now between the leftist dems and the GOPe. Rather than focusing on the merits of the debt ceiling saga I was delighted that it, supposedly, really upset Republican leadership. This is not a good place, but the Republicans have pushed me into it.

Shoot, I must have missed it but how much personal money did Obama and Hillary donate ?

Hill and Bill will donate some more used underwear.

It will be hard for people to keep up the Trump=Hitler meme when they see that video. Of course the media won’t show it…

I’ve probably mentioned it before, but my wife is part of a Colorado (Southern) Baptist Disaster Relief team serving up 3,000+ meals a day out of a couple of Second Baptist church locations in Houston. They don’t solicit for funds much so I will: here is a link to our Colorado affiliate ( http://saturatecolorado.com/dr/ ). The Baptists have almost no overhead – everyone is a volunteer who also pays their way to wherever they are working. Funds go for equipment (feeding trailers, heavy equipment, chain saws, etc.) and supplies.

Hillary Clinton and her scam charity have given…nothing.

When is this tumor on America going to be indicted?

Never, as long as T-rump wills it.