“hereby stayed with respect to refugees covered by a formal assurance”

This is an UPDATE (by WAJ):

Justice Kennedy has issued a partial stay of the 9th Circuit ruling, with regard to the refugee aspect of the Travel Order, the only portion as to which the government sought a stay:

IT IS ORDERED that the mandate of the United States Court of Appeals for the Ninth Circuit, case No. 17-16426, is hereby stayed with respect to refugees covered by a formal assurance, pending receipt of a response, due on or before Tuesday, September 12, 2017, by 12 p.m., and further order of the undersigned or of the Court. 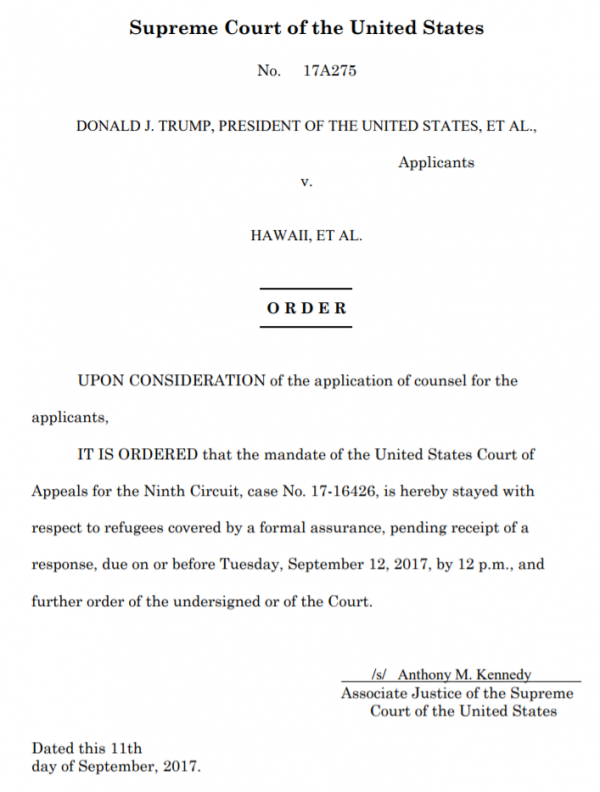 Monday, the Justice Department requested a stay of the 9th Circuit’s most recent interpretation of Trump’s executive travel order.

The Trump administration is returning to the Supreme Court in an effort to overturn lower court rulings crimping the application of President Donald Trump’s travel ban executive order.

Justice Department lawyers asked the high court Monday to allow authorities to keep up a block on many refugees covered by Trump’s ban.

The dispute taken to the justices Monday addresses how much of the travel ban can be enforced until the Supreme Court rules on the broader issues. The justices are scheduled to hear arguments Oct. 10 on a pair of cases related to the ban.

The stay takes issue not with the familial relationship issue, but with the allowance of refugees, an immigration classification Trump’s executive order initially temporarily halted.

The latest, in this unnecessarily long and drawn out saga, is the 9th Circuit’s opinion allowing just about every family member of foreign nationals receiving visitor benefits exemption from the president’s travel order which took aim at countries known to be state sponsors of terror (Iran, Libya, Somalia, Sudan, Syria, and Yemen).

Break up the 9th circuit.

notamemberofanyorganizedpolicital in reply to Whitewall. | September 11, 2017 at 2:37 pm

Liquidate them – sell off their ill-gotten assets!

Rent them out to North Korea where they would feel much more at home.

(In a whispered voice) “It looks like the SCOTUS has picked out a Big Bertha driver for this shot. They’re addressing the ball from a very simple lie, direct from the 9th Circuit, so there should not be any problems with the drive. All they need to do is hit it straight down the center without slicing the ball toward the sand traps on the right or hooking it into the water on the left. There’s the backswing, and…

We’ll be right back after these commercial messages.

Tell Jeff they are all pot smokers who own BMW ‘s to confiscate.

Impeach and replace the entire 9th Circuit Court of Appeals or as an alternative, allow all of California west of the San Andreas Fault to secede including the SF bay area…

I was trained under the notion that “reasonable minds might differ” at the appellate level, but the certain judges at 9th Circuit seems to have forgotten that there are constraints on this principle.

In my view, the biggest constraint is the requirement to put the opinion in writing. A written judicial opinion should cite the applicable law, state the positions of each party on each decisional point or issue, cite the applicable precedent, apply the law and state why or why not any given precedent applies.

The reason for this formulaic process is to force the author to demonstrate that he has given the problem the thorough and careful consideration it deserves. The judges I worked with would say that, if an option “would not write,” it is time to reconsider the result.

The scathing critiques of the 9th Circuit in this case arise not from mere disagreement over the outcome, but failure to honor the judicial decision-making process. Work of such poor quality erodes the credibility of our entire judicial system because it is plainly arbitrary and capricious.

That’s a lot of words to say that the 9th Circuit are hacks.

I have more respect for a conscientious hack than for these pseudointellectual snobs. A hack will follow the format, cite the applicable law, and at least confront the issue in the case. Hacks tend to be thorough, and unimpressed with their own intellectual capabilities. They follow precedent and work to reconcile with it, because they respect the efforts and intellects of those who considered similar problems before them.

Justice Roberts didn’t muck about. The speed of his stay probably tells you everything you need to know about the legal basis of the 9th circuit decision.

This was Justice Kennedy. Chief Justice Roberts would have found a way to redefine this as a tax and sent it back to the House of Representatives.

Since Kennedy is the center-most centrist on this Court, his granting the injunction speaks poorly for the chances of SCOTUS upholding the 9th Circus decision.

notamemberofanyorganizedpolicital in reply to great unknown. | September 11, 2017 at 3:52 pm

They expect decent law-abiding taxpayers to support the BUMS.

The ban didn’t cover countries like BE where terrorists are more likely to come from. Because it’s never really been enacted, Trump has in effect been continuing Obama’s agenda. Trump has even admitted – at least twice – that his actions have made the USA less safe.

All Trump had to do was ramp up screening. That means no paper trail, no admittance. That wouldn’t have been so easily challenged and anyone who challenged it could be made to look bad. It would have made the USA safer and it would have greatly minimized Obama’s agenda.

Why didn’t Trump just ramp up screening (as described above), rather than continuing Obama’s agenda?

But no, to you liberals putting the needs of Americans first makes you less safe (in your opinion). Fortunately in the adult world that’s not actually the case.

A decade ago I tried to ask Obama a tough question that might have prevented his election. I didn’t get the chance, but I made a video ( youtube.com/watch?v=EiullH5jU1A ) and urged others to ask him that question. Conservatives made lots of creative excuses why they wouldn’t help.

Instead, conservatives in effect helped Obama every step of the way. The proof’s in the pudding: Obama was at first a novelty candidate considered extremely unlikely to win. Thanks to how conservatives did things, he not only won, he won twice. I can’t imagine in effect helping Obama win even once, but I’m not a conservative.

P.S. Not content to do all that, conservatives are now in effect helping Trump as he colludes with Pelosi to push amnesty.

So, take the floor. What ARE you?

Please be candid and elaborate.

The latest, in this unnecessarily long and drawn out saga, is the 9th Circuit’s opinion allowing just about every family member of foreign nationals receiving visitor benefits exemption from the president’s travel order

Having worked through immigration process myself, the reason they did not fight the family clause is because in truth it becomes moot.

It takes many years to get visa numbers for non direct parental or siblings under 21. It takes so long now that most people give up long before the visa number is allocated.

What if I told you that President Trump could unilaterally shut off the stream of refugees for the remainder of his presidency and force long-term reforms to the entire refugee program — all without interference from the courts?

The Refugee Act of 1980 (8 U.S.C. §1157(a)(2)) grants the president unilateral authority to set the cap and countries of origin of refugees. It merely requires the State Department to consult with and inform the Senate Judiciary Committee prior to setting the cap in a written report in the weeks preceding the next fiscal year. That time is now. Obama used it to the detriment of the country to bring in over 100,000 refugees in his last year in office; Trump can use it to protect our security by setting the cap at zero.

While the 1980 Refugee Act was sold to the public as a way of granting Congress and the states more input, it left the door open for a president who doesn’t respect his nation’s concerns to unilaterally bring in as many refugees as he desires. This has been a source of much consternation for conservatives, because over the past two decades, this has allowed the presidents to flood the country with hundreds of thousands of refugees from Somalia, Iraq, and other places that do not fit the description of religious or ethnic persecution. Now the shoe is on the other foot. The president most certainly may bring in as few as he wants. There is no mandatory minimum. Now that he is no longer working off Obama’s FY 2017 determination, he can chart his own course, without Congress and without the meddling courts.
https://www.conservativereview.com/articles/trump-can-unilaterally-legally-shut-down-broken-refugee-program

I have not looked under the hood of this yet. I merely post it for a “spring-board of discussion”.

Seems sound on the surface.

Hahahahaha 24…its quite clear touvare anything but a rationally thinking adult. Hope back in your safe space so us adults can talk adulty things haahahahah

Plus I love how the black baby Jesus is now a conservative creation!!! We have come full circle!!! Hahahahaha 🙂

On a serious note, does this mean even the most one eyed limp wristed liberal disowning the messiah is the start of the down fall of the Obama crime family??

Interesting times coming up with the left dispensing their God hahahahaha

The law doesn’t mean what it says. The law means what the courts say it means.

That’s not only pretty true, it’s always been that way.