Trump also spoke with leaders from South Korea and Japan. 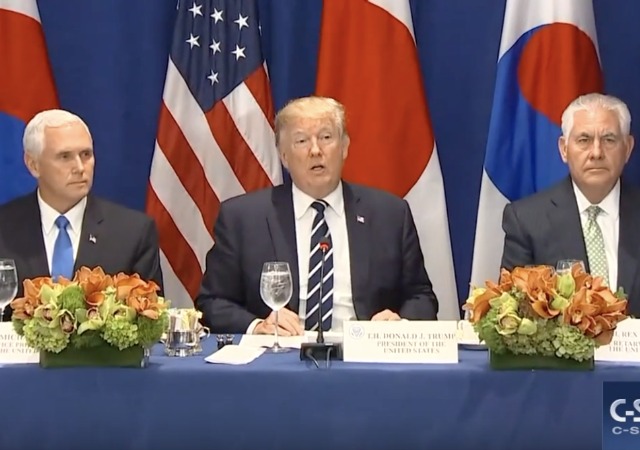 Speaking at the United Nations before a working lunch with Japanese Prime Minister Shinzo Abe and South Korean President Moon Jae-in, two key allies in the region, Trump said the order would significantly expand the U.S.’s ability to crack down on individuals and companies that do business with North Korea.

The president said he had empowered the Treasury Department to “target any individual or entity that conducts trade in goods, services or technology” with North Korea.

“I want to be clear the order targets only one country – that country is North Korea,” Trump said.

“North Korea’s missiles and weapons development is a grave threat to peace and security in our world and it is unacceptable that others financially support this criminal rogue regime,” he added. “The brutal North Korean regime does not respect its own citizens or the sovereignty of other nations. A new executive order will cut off sources of revenue that fund North Korea’s efforts to develop the deadliest weapons known to humankind.”

Trump said, “Why not?” when asked if dialogue could still happen with North Korea and his aides have said that “diplomacy is the preferred outlet for containing the nuclear crisis.” Trump stated, though, that “military options are on the table for dealing with North Korea.”

Trump mentioned that he and South Korean President Moon Jae0in discussed trade and North Korea and noted the two made “a lot of progress in a lot of ways.”

While many lambasted Trump’s speech at the UN General Assembly, which he said that the U.S. could destroy North Korea, Moon praised it:

“North Korea has continued to make provocations, and this is extremely deplorable and this has angered both me and our people,” Moon said.

“I am very satisfied. Mr. President, at the UNGA you made a very strong speech, and I believe that strength of your speech will also help to change North Korea,” he added.

Trump met with Abe later on. From The Washington Post:

Trump praised Abe for “doing a great job for Japan” and then said they had “discussed in great detail” the threat posed by North Korea’s nuclear weapons program.

Abe, through a translator, echoed the president and said that pressure must be applied on Pyongyang “in a robust manner.”

Early Thursday morning, North Korea’s UN Ambassador Han Tae Song said that sanctions “would endanger the survival” of children in the hermit kingdom. Han insisted that the regime protects and promotes “the rights and welfare” of children. From Reuters:

But Han said that new sanctions imposed by the United States and the U.N. Security Council over North Korea’s nuclear and ballistic missile tests were hampering the production of nutritional goods for children and provision of textbooks.

“The persistent and vicious blockade and sanctions against the DPRK (Democratic People’s Republic of Korea) are not only hampering the endeavors for the protection and promotion of the rights of the child but also seriously threatening their right to survival,” he said, calling for sanctions to be lifted.

Reuters learned today that the central bank in China, one of North Korea’s only large allies, told banks to stop doing business with North Korea due to UN sanctions. Reuters reported:

The sources said banks were told to stop providing financial services to new North Korean customers and to wind down loans with existing customers, following tighter sanctions against Pyongyang by the United Nations.

The sources said lenders were asked to fully implement United Nations sanctions against North Korea and were warned of the economic losses and reputational risks if they did not do so.

The document directed banks to explain to any North Korean customers that “our bank is fulfilling our international obligations and implementing United Nations sanctions against North Korea. As such, we refuse to handle any individual loans connected to North Korea.”

The document did not specify whether existing North Korean account holders could still deposit or remove money from their accounts.

Trump has expressed frustration with China due to its lack of action against North Korea. In July, his administration even considered sanctions “on small Chinese banks and other firms doing business with Pyongyang.”

Sundance over at The Conservative Treehouse has an excellent article on this.

NK is jeopardizing their own children’s welfare, by refusing to cease their hostile nuclear weapons programs, period! That’s all on THEM, and THEIR priorities!

Hahahahahahhahahahaaa….like Palestinians they couldn’t give a rats arse about their children welfare!!

The Chinese are most likely lying. At least they’ll be going underground with it, which is probably an improvement.