Trump Pushes Widespread Reform at the UN During Special Forum

Trump Pushes Widespread Reform at the UN During Special Forum

“We also ask that every peacekeeping mission have clearly defined goals and metrics for evaluating success.” 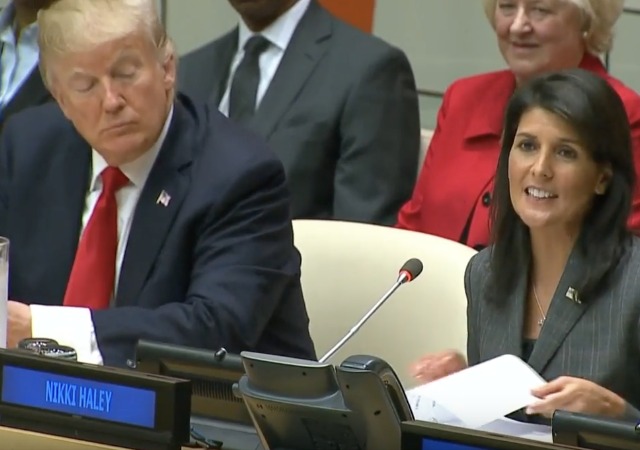 President Donald Trump and U.S. Ambassador to the UN Nikki Haley spoke today at a UN special forum called “Reforming the United Nations, Security, and Development” to kick off a week of meetings. In his remarks, Trump urged the UN to reform, make results its top focus, and reduce its bureaucracy.

Haley started off the forum by praising the changes that the UN has done since she’s taken the ambassador role, calling the organization that used to talk a lot, but now has become “action-oriented.” She used the latest sanctions and votes from the Security Council on North Korea as proof of the change. China and Russia, North Korea’s only big allies left in the world, have voted for more action against the hermit kingdom.

Then she handed the stage to Trump, who noted the good things the UN has done, but reminded the panel that the UN has not reached its potential due to overblown bureaucracy.

But while Trump chastised the United Nations — an organization he sharply criticized as a candidate for president for its spiraling costs — he said the United States would “pledge to be partners in your work” in order to make the U.N. “a more effective force” for peace across the globe.

“In recent years, the United Nations has not reached its full potential due to bureaucracy and mismanagement,” said Trump, who rebuked the United Nations for a ballooning budget. “We are not seeing the results in line with this investment.”

The president pushed the U.N. to focus “more on people and less on bureaucracy” and to change “business as usual and not be beholden to ways of the past which were not working” while also suggesting that the United States was paying more than its fair share to keep the New York-based world body operational.

Trump also said he wanted reform to include protections for whistleblowers and changes to international military deployment. From The Washington Examiner:

“We must ensure that no one and no member state shoulders a disproportionate share of the burden, and that’s militarily or financially,” he said. “We also ask that every peacekeeping mission have clearly defined goals and metrics for evaluating success.”

The whistleblower point made my ears perk. I remember covering extensive UN abuses across the world at Breitbart and when anyone dared to speak out, the whistleblower received punishment.

Haley praised UN Secretary-General Antonio Guterres for making reforms, one of which whistleblower protection. The UN reported in January:

As part of his reform agenda, Mr. Guterres has made it a priority for the UN to have a whistleblower protection policy that meets the highest possible standards, and the updated plan aims to ensure the Organization functions in a more open, transparent and fair manner. UN Staff and management both agreed on the policy, contained in a bulletin that was just issued, which meets best practices.

In January 2016, Anders Kompass, director of field operations for the office of the high commissioner for human rights in Geneva, was finally exonerated for wrong doing after an internal investigation. What did he do that warranted suspension and an investigation? He exposed the sexual abuse of children by French forces in the Central African Republic (CAR). He leaked the documents because no one internally was doing anything about the abuse.

Kick the UN out of the US.

Reduce US involvement in the UN.

Not only is reform of the UN inadvisable (ya can’t reform that which is inherently evil), it’s impossible. For too many, most notably the Muslim bloc (about 55 votes), the UN is the best soapbox they’ll ever have. And that bloc plus the other thug-run members of the UN use it to tear down the West and Israel. Endlessly.

But what we can do is leave the UN.

To this end there is a pending bill to do at least the first part of the slogan, American Sovereignty Restoration Act
of 2017.

This is Trump’s modus operandi… give them a chance to reform… maybe even two or three chances… and then when they don’t he can justify greatly reducing support and finally pulling out.

I’ll go with John Bolton, who insists that for all its many faults the advantages of our being in the UN outweigh the disadvantages.

Did Bolton elaborate and spell out the case or did he just play his typical father knows best type routine?