I used to be puzzled by patently- and provably-untrue statements made by prominent Democrats.  For example, former Democrat governor, presidential hopeful, and DNC chairman and current “Democrat consultant” Howard Dean stirred controversy earlier this year with his insistence that “hate speech” is not protected by the First Amendment.

I wrote about this a few months ago, noting that restricting Americans’ First Amendment rights is a key goal of the left.

One of the fondest dreams of the radical (and not-so radical) left is to undermine the First Amendment and ultimately to control speech.  Democrats have advocated the DOJ’s investigation and even prosecution of climate “skeptics,” condemned “hate” speech formally in the House, supported the criminalization and ban of “hate” speech, and as we see play out on college campuses across the nation, resorted to violence as a response to speech with which they disagree.

This assault on one of our nation’s most cherished foundational principles is ongoing and has most recently manifested in a tweet by former governor and former Democrat presidential candidate Howard Dean.

Hate speech is not protected by the first amendment. https://t.co/DOct3xcLoY

Dean knows that this is untrue.  He has to know it.  But he kept digging and digging.

I came to understand that like other Democrats and leftists, Dean wasn’t interested in the facts he already knows; instead, the goal is to establish, reinforce, and eventually codify into law the false belief that “hate speech” is somehow exempt from First Amendment protections.

It’s also worth noting that “hate speech” has come to mean any speech that the (leftist) listener deems “offensive” or “hurtful.”

A recent study released by the Brookings Institute illustrates how pervasive the idea that “hate,” “offensive,” or “hurtful” speech is unconstitutional has become among college students. Among other findings, the study reveals that a full 44% of college students believe that “hate speech” is unprotected.

The survey results establish with data what has been clear anecdotally to anyone who has been observing campus dynamics in recent years: Freedom of expression is deeply imperiled on U.S. campuses. In fact, despite protestations to the contrary (often with statements like “we fully support the First Amendment, but…), freedom of expression is clearly not, in practice, available on many campuses, including many public campuses that have First Amendment obligations.

. . . . Here is the question asked in the survey, with results presented in both aggregate form (in the column labeled “all”), as well as by political affiliation, college/university category (public vs. private), and gender.

As alarming as this is, it gets worse.

With the rise of antifa, black bloc, and other violent leftist “protesters,” the left has embraced a form of anti-free speech vigilante “justice.”  Hear something you don’t like?  Learn of someone with whom you disagree scheduled to speak?  You have a duty to show up and use any means necessary to stop . . . the saying of words. 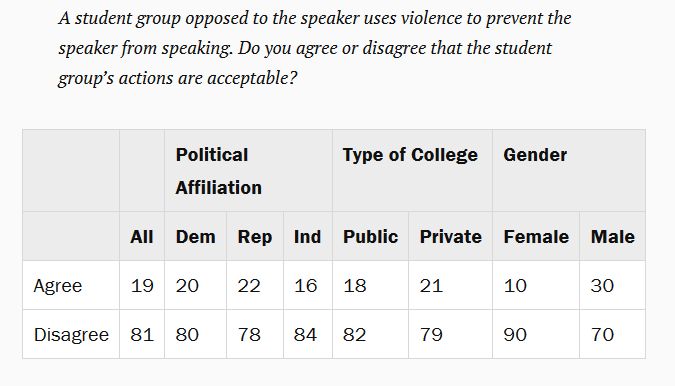 These results are notable for several reasons. First, the fraction of students who view the use of violence as acceptable is extremely high. While percentages in the high teens and 20s are “low” relative to what they could be, it’s important to remember that this question is asking about the acceptability of committing violence in order to silence speech. Any number significantly above zero is concerning. The gender difference in the responses is also notable.

Perhaps unsurprisingly in light of the above, Brookings found that the majority of college students expect their colleges and universities to “protect” them from “offensive” and “biased” (i.e. opposing) views and ideas. 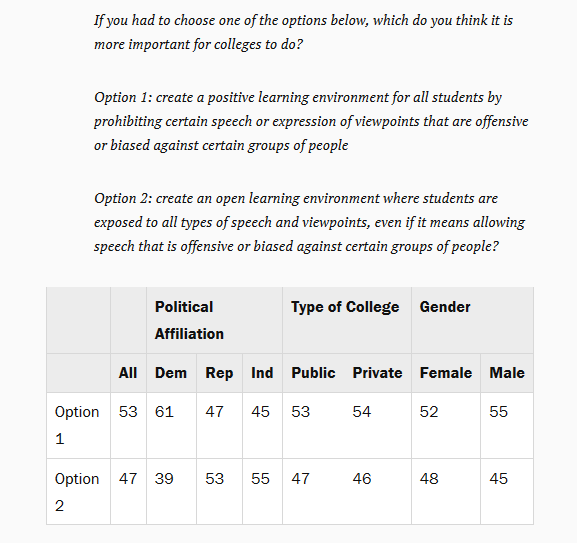 Interestingly (and in my view, discouragingly), across most categories, and in the aggregate, the majority of students appear to prefer an environment in which their institution is expected to create an environment that shelters them from offensive views. The exceptions are among Republicans and Independents, though even in those categories nearly half of the students still expressed a preference for the more sheltered environment.

Even the Washington Post is dismayed by these findings.

Here’s the problem with suggesting that upsetting speech warrants “safe spaces,” or otherwise conflating mere words with physical assault: If speech is violence, then violence becomes a justifiable response to speech.

Just ask college students. A fifth of undergrads now say it’s acceptable to use physical force to silence a speaker who makes “offensive and hurtful statements.”

As you can imagine, and despite the latest, laughable leftist effort to lump libertarians in with “fascists,” the libertarian publication Reason responds to the Brookings findings with frustration that American college students reach college with such a twisted and inaccurate concept of free speech.

It’s not just a matter of preference, however. Given that a majority of students incorrectly say the First Amendment doesn’t protect hate speech, or that they don’t know whether it does, we must also consider sheer ignorance as an explanation for the waves of student-led shut downs on American campuses in recent years.

Teenagers are somehow making it through 12 years of primary education without absorbing the most basic civics lesson: The founding documents of the United States of America zealously protect people who make offensive statements from censorship at the hands of government officials or violent mobs.

Something has to be done about current campus culture that not only skews but purposefully undermines all that America stands for, including the protections afforded by the Bill of Rights.  It’s not clear what that something is, but we, as supporters of our Constitution and its protections for both states and individuals, must find a way to mitigate the damage.

College students’ views of the First Amendment are of profound importance for multiple reasons. First, colleges and universities are places where intellectual debate should flourish. That can only occur if campuses are places where viewpoint diversity is celebrated, and where the First Amendment is honored in practice and not only in theory. Second, what happens on campuses often foreshadows broader societal trends.

Today’s college students are tomorrow’s attorneys, teachers, professors, policymakers, legislators, and judges. If, for example, a large fraction of college students believe, however incorrectly, that offensive speech is unprotected by the First Amendment, that view will inform the decisions they make as they move into positions of increasing authority later in their careers.

We, our children, and our grandchildren are facing a perilous future at the hands of today’s college students who are revving up to attain cultural, legislative, and judicial leadership positions.  It’s not premature to worry about them as the self-satisfied and reflexively violent future gate-keepers of “acceptable speech.”

RE: “Study: 44% Of College Students Think “Hate Speech” Is Not Protected Speech”

Time for their “re-education!”

The students also conflate “hate” with “offensive.” Just because something is offensive doesn’t make it hateful. It doesn’t even make it untrue. (Which, interestingly, Antifa types rarely claim. Do they know they’re actually suppressing the truth and prefer their fantasy worlds?) For some, the truth is unpalatable, but that does not give anyone the right to suppress it, no matter how offensive it may be to them.

Activism is the form of irrationalism which extols direct physical action, based on will or instinct or faith, while repudiating the intellect and its products, such as abstractions, theory, programs, philosophy. In a very literal sense, activism is irrationalism – in action. “We approach the realities of the world only in strong emotion and in action…,” says Hitler.
Leonard Peikoff in The Cause of Hitler’s Germany, explaining the influence of Kantian philosophy on the German psyche and the implementation of its precepts by the Nazis during Hitler’s rise to power

I like it!
Hey college kid your viewpoint sucks. BAM!!
Turn about is fair play – right kid?
Hope your jaw feels better in a week or so.

This is by design. Liberals have been in control of K-12 education for decades and this is the fruit. They aren’t interested in teaching actual information they want to indoctrinate them.

I’d love to see a study comparing this to students that were homeschooled.

While I wholeheartedly agree with your thought expressed here I admit some frustration with the (mis)use of the term liberal. The leftists have taken over our K-12 education, not liberals. Leftists have also appropriated the term ‘liberal’ to hide their true illiberal leftist/statist nature.

I have found homeschooled children to be about 2 years ahead of their government schooled cohort and to be extremely well-informed.

The correct term for “liberals” is Progressive Fascists.

”Don’t you see that the whole aim of Newspeak is to narrow the range of thought? In the end we shall make thoughtcrime literally impossible, because there will be no words in which to express it.”

— Comrade Syme in a discussion with Winston Smith in 1984. Orwell saw the plan.

The Hitler Youth had the same indoctrination. Same for Pol Pot’s little killers, and same for Mao’s Red Guard.

“We” sat by and did nothing while the left destroyed our young and the future of our nation. “We” also sat by and continued to reelect the biggest wastes of life as those people who infest the GOPe and got fat while our country rotted – all the time having the power to stop it.

“We” should be very happy with ourselves.

A great deal of this attitude goes back to whatever point when people decided that being offended was an involuntary reaction instead of a choice.

Why do we say we don’t care if you are offended? Because you choose to be offended and you have to choice to not be offended. Instead today it seems we have some that are habitually offended.

Advocacy for diversity or judging people by the “color of their skin” is hate speech.

Advocacy for redistributive change, because the “Jews” didn’t build that, is hate speech.

Rarely is the solution to one’s problem a change in someone else’s behavior. When you wncounter it, know you are dealing with the mentality and immaturity of a child. Liberal indoctrination of our children through government control of public schools has done its best to arrest child development in logic and rational thought. Public schools have become so many sheep farms.

That’s an insult to sheep farms.

SHEEP LIE! I HAD NOTHING TO DO WITH THAT!

No one should be surprised, the Left has been in charge of Public Education for a couple of generations. The things taught and the parts that are emphasized, is no accident.

The Progs are all about control, they are getting it by default. A whole bunch of educated idiots, easily led by stupid politicians.
It has been said: “Beggars are easier to please.”

Further proof that the education system (K-College) is an abject failure.

notamemberofanyorganizedpolicital in reply to Exiliado. | September 23, 2017 at 2:18 pm

It’s nothing but a giant “Brain-Washing Machine” – bottom loader type of washer!

The ONLY way that the Left will discover the virtue of tolerating speech they disagree with, and opposing it non-violently only, is when they find that others disagree with their speech and are more skilled at disagreeing violently with them. They are making the new rules. They will have to live by them.

Stealing from someone else:

Let’s say two Leftist college students get into an argument over some issue and they both find each others talking points offensive. Which one gets labeled as “hate speech” and is forced to remain silent?

This is the reason why “intersectionality” was fabricated. Whichever of the students can check off the most boxes of victimhood gets to label the other a bigot.

Every snowflake wants to be the Apex Victim, it’s the only way they have to gain status.

Have you ever listened to the argument from some of these leftists and wondered… “who ties your shoelaces for you?”