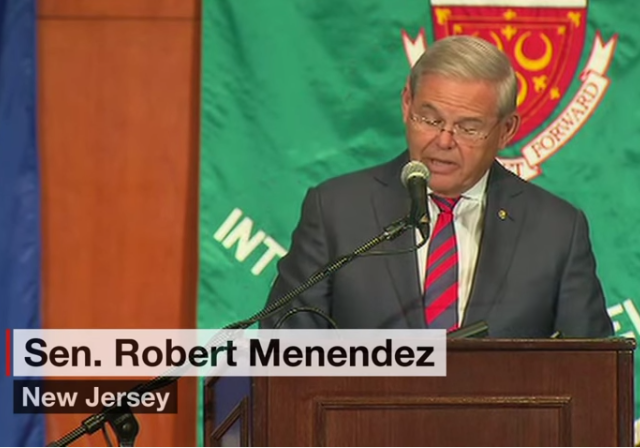 It’s been two years since Sen. Menendez was indicted on corruption charges and try as he might, he can’t seem to get himself out of this mess.

The Democratic Senator from New Jersey was investigated by Eric Holder’s Department of Justice and accused of using his federal office to help wealthy dentist and long-time friend and campaign donor, Dr. Salomon Melgen by attempting to sway policy that would be favorable to Melgen’s business. The pair were charged with 18 counts of bribery and fraud.

Scheduled to begin Wednesday, Menendez’s request for breaks in the trial so he would be able to scoot down to D.C. to cast votes was denied by a federal judge.

In a decision made public on Friday, U.S. District Judge William Walls in Newark, New Jersey, rejected Menendez’s claim that he deserved special treatment because he had a “constitutional duty” to be in Washington for his constituents.

Walls said he suspected the request was part of a strategy to “impress the jurors” with Menendez’s importance, but that it was speculative to suggest the senator would miss key votes.

“The court will not serve as concierge to any party or lawyer,” Walls wrote. “The motion – from a practical perspective – is nigh frivolous.”

Abbe Lowell, a lawyer for Menendez, did not immediately respond to a request for comment. The senator’s press secretary had no immediate comment.

Menendez, 63, is charged with accepting improper campaign donations and gifts, including luxury trips and private jet flights, from co-defendant Salomon Melgen in exchange for lobbying on the wealthy Florida ophthalmologist’s behalf.

Both men have pleaded not guilty to fraud and bribery. Menendez is running for a third Senate term next year.

Menendez appealed to the Supreme Court to dismiss the charges, but they refused to do so in March.

What happened to the allegation that Menendez dallied with underage prostitutes in the Carribbean?

There is. But why would you believe the MSM? Are any of them testifying?

Pedophilia is the next dem mission to get accepted. They’re very sick people.

If you have any luck, Christie will get to screws the citizens of NJ one last time. I wouldn’t be surprised if Christie moves out of NJ after his term is up.

Yep. It was even covered here at LI.

The crimes had been public knowledge for years. The prosecution was announced four days after Senator Menendez criticized President Obama’s deal with Iran. (Or perhaps he became so publicly critical because he knew the prosecution was imminent…)

Isn’t it odd, the things that Obama treats like betrayals? He seems to really hate Israel.

0bama isn’t a Moslem, and saying he is only works to discredit everyone on our side.

0bama hates America; he’d have no problem with Israel if it were not allied with America. Remember that originally leftists loved Israel. It was only when it became identified with the USA and against the USSR that that changed.

Bob Menendez is the senior United States Senator from New Jersey. He is a Democrat. He is currently on trial for corruption in relation to taking bribes for covering for a health care provider that defrauded Medicare out of $105 million. That provider has already been found guilt of fraud.

Menendez is a sitting Senator. In an act of titanic, brass plated ballsiness, he requested leave from his trail to cast votes in the Senate.

The judge denied the motion.

I disagree with the ruling.

I think Menendez should have been allowed to attend the Senate votes.

I think he should be walked into the Capitol Building by Federal Marshalls, in an orange jumpsuit in handcuffs and leg irons, and escorted to his seat. Once the vote was cast, the Marshalls should escort him out again.

The people of New Jersey are entitled to his representation.

The rest of us are entitled to see him be treated like the criminal he is.

This is probably why I’m not a judge.

That would be great TV. But I think there are some sticky constitutional issues…

Our federal legislators have a few explicit constitutional privileges — one of which is absolute immunity from arrest when they are on their way to or from a session of Congress.

If he decided to hop a cab from Congress to Dulles and board a flight for Venezuela, arguably the authorities would be Constitutionally barred from stopping him.

Totally separate question: I wonder if Chris Christy is thinking about appointing himself to the Senate.

FYI (Is this report accurate?)