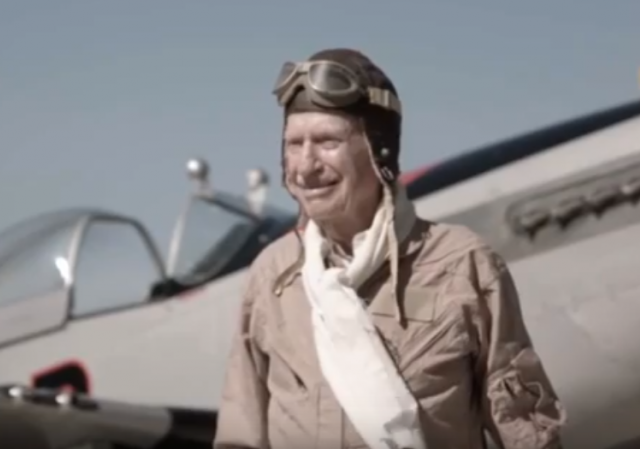 Mitchell Flint, a former U.S. Navy fighter pilot during World War II who later became a founding member of Israel’s legendary first fighter squadron and flew dozens of missions on behalf of the fledgling Jewish state during its 1948 War of Independence, died of natural causes on Saturday (September 16) at his home in Los Angeles.

In several prior posts, we described how Flint and other non-Israeli volunteers played a key role during the second phase of the 1948 war, when the combined armies of five Arab states threatened to overrun and cripple Israel and “throw the Jews into the sea”:

As we highlighted, Flint was part of a gutsy group of mostly World War II aviators who gave up their comfortable post-war lives in America and a half-dozen other countries to answer Israel’s call for help. 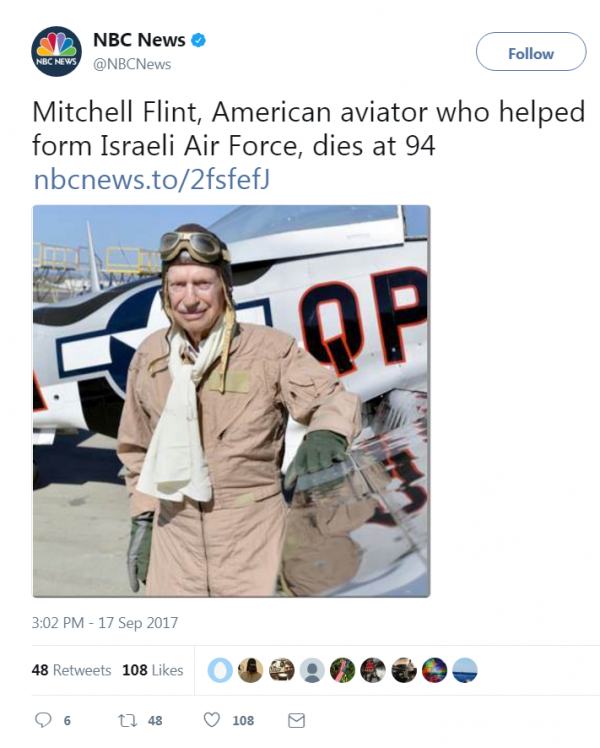 Their little-known true stories of daring do and high-flying chutzpah, along with the beginnings of the scrappy Israeli Air Force, have now inspired two feature-length documentaries. Another major motion picture, “Angels in the Sky”, produced by Flint’s son and featuring his father, is also set for release next month. 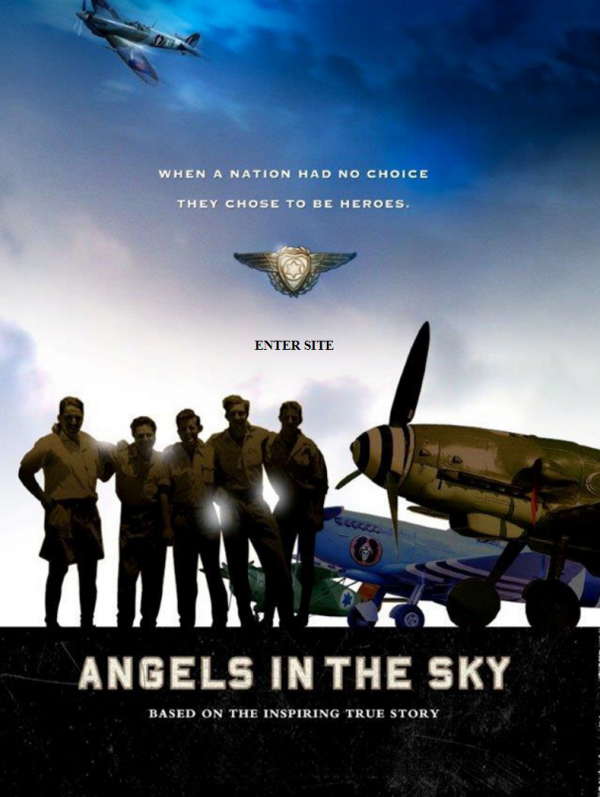 The son of a World War I navy combat flyer, he followed in his father’s footsteps, volunteering at age 18 to serve as a U.S. Navy pilot.

Flint saw action in the Pacific while serving on the carrier USS Wasp under Admiral John S. McCain Sr. He was awarded three Air Medals and eight Navy Unit Commendations during his World War II service.

In the summer of 1948, with four years of wartime experience under his belt, he graduated as an industrial engineer from the University of California, Berkeley. At that very time, the newly declared state of Israel was struggling to defend itself from the Arab state onslaught.

What motivated Flint to volunteer for yet another risky military operation, one that would see him flying alongside Ezer Weizman, the future head of the Israeli Air Force, defense minister, and the country’s 7th president?

In a 2012 interview, Flint explained his reasoning:

I’m Jewish, Israel desperately need trained fighter pilots, so I thought I could perhaps do something to sustain the state.”

He reportedly told his mother a fib about his plans, in order to spare her any anguish. Flint told her that he was going to the London Olympics (he kept up the ruse by arranging to have postcards sent to his Mom from England).

Like the other foreign pilots who fought during Israel’s War for Independence, Flint first went to Czechoslovakia for training in rebuilt Messerschmitts—Germany’s main fighter plane during World War II—which had the Star of David painted over their Nazi insignia. 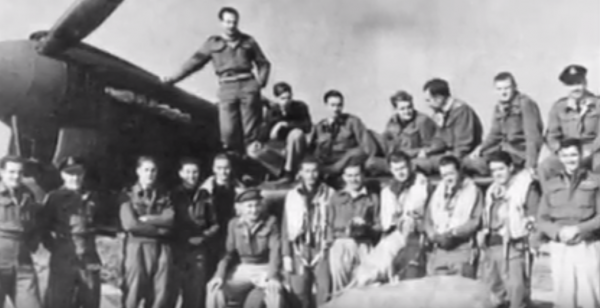 [Foreign Aviators who Flew for Israel in 1948 | Credit: You Tube]

He also flew Mustangs and Spitfires (Flint is believed to be the only wartime combat pilot to have flown all four fighter planes of that era).

He flew over 50 missions during the 1948 war and survived two crashes. He then flew above Israel’s 1949 Independence Day parade in one of the 12 aircraft that made up the country’s entire force of fighter planes.

After the war, Flint returned to the United States and resumed his life in California. He studied Law at the University of California, Los Angeles and became an attorney in Hollywood.

But he still continued to fly regularly. Last year he even flew a special sortie over Israel’s coast on the country’s Independence Day.

He was a humble man who did what he did and never looked for glory,” Michael Flint said of his father. “He was proud of what he did until the very end.”

That certainly comes through in the promotional trailer for “Angels in the Sky”, the movie that Michael Flint, a former Paramount executive, has produced. 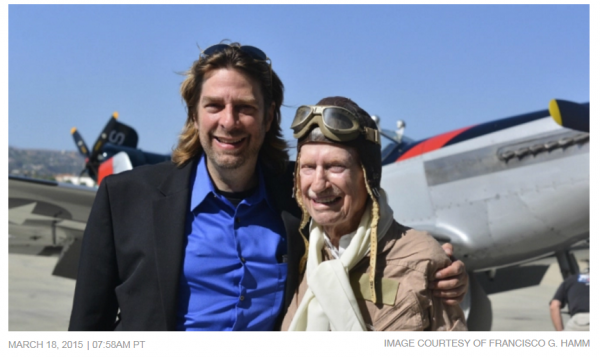 He says his feature film is “for all the pilots”, but he especially wanted to “get it done” while his father was still alive:

Some 4,000 foreign volunteers, collectively known as Machal—the Hebrew acronym for Volunteers from Abroad—served during Israel’s War of Independence.

These non-Israeli men and women (some 30% were non-Jews who had witnessed the horrors of the Holocaust) ended up making important contributions to the war effort.

To be clear: the 1948 war was “won first and foremost” by the Israelis themselves, who bore the overwhelming brunt of the casualties. But, as we discussed in our prior posts, there can be no doubt that Flint, and the dozens of other highly skilled World War II combat-trained pilots and their crews, helped to turn the tide of the war in Israel’s favor.

Israel has long recognized their bravery and sacrifice (With the U.S. at the time enforcing a strict arms embargo, the Americans among the group, as we noted in our previous posts, risked their civil rights along with their lives. The U.S. government threatened to revoke the citizenship of any American who violated the Neutrality Act by joining the Jewish defense forces).

Flint was honored for his service to the fledgling Jewish state in 1979 and 1999, according to media reports.

When he was 90, Flint was again honored by Israel PM Benjamin Netanyahu during ceremonies for Israel’s 65th year of independence. This week, the Israeli Air Force recognized his service: 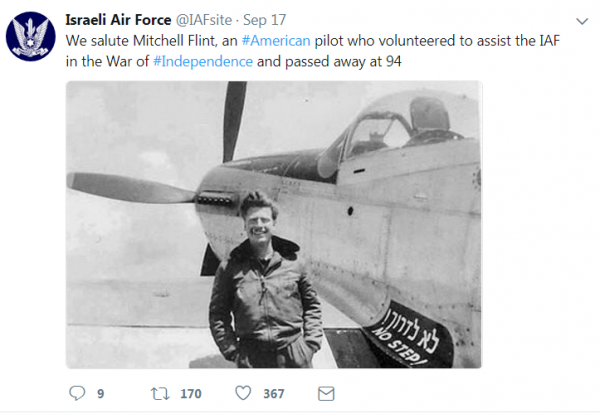 Last year while in Israel for the festivities, Flint was quoted as saying:

We did what we needed to do, and since then the State of Israel has only become stronger—Israel can defeat any enemy…I remember times which were a lot more difficult. Now, things are a lot better. The most important thing is that the State of Israel can now take care of itself and has the ability to deal with and conquer any foe.”

Funeral services for Mitchell Flint were held yesterday (September 19) at Hollywood Forever Cemetery. The family requests that all memorial donations be made to Friends of the Israel Defense Forces.

Flint is survived by his wife of 59 years and two sons.

Mitchell Flint is a true American and Israeli hero.

Miriam F. Elman is an Associate Professor of Political Science and the Robert D. McClure Professor of Teaching Excellence at the Maxwell School of Citizenship & Public Affairs, Syracuse University. From 1983-1985 she served in the Israeli Air Force, earning the rank of sergeant. She is the editor of five books and the author of over 60 journal articles, book chapters, and government reports on topics related to international and national security, religion and politics, and the Israeli-Palestinian conflict. She also frequently speaks and writes on the Boycott, Divestment, and Sanctions (BDS) anti-Israel movement. Follow her on Twitter @MiriamElman

Another good book on the IAF. RIP Mitchell and thank you.

Zanek!
Format: Hardcover
This little novel was published in 1971 and thus misses out on one of the major Arab-Israeli wars in 1973: The Yom Kippur War.
The author was allowed to write an account of his experiences as a witness to the Heyl Ha’Avir (Israeli Air Force) during the War of Attrition. While I’ve called the book historical fiction, I only do so because Israeli security precautions precluded the author from telling everything he had seen. I would imagine that IDF censors went over the author’s manuscripts many times before finding a copy they could live with.
Having said that, I highly recommend “Zanek” as a novel to provide wonderful background to what Heyl Ha’Avir operations must have been like during the War of Attrition. The characters and personalities must be portrayals of actual people because their life likenesses are just too keen. Interestingly enough, Lom Nordeen’s 1990 book “Fighters Over Israel” seems to verify what the author, William Stevenson, wrote back in 1971 in this little paperback. The picture insert has some great photographs of Heyl Ha’Avir aircraft and personnel.
If you’d like a feel for what the Heyl Ha’Avir is like from a personal perspective, please buy “Zanek!”

What an amazing story and an incredible life lived!

There’s a great movie to be made from this — I’d rather see that than all these worthless biopics glamorizing and romanticizing “gangsta” rappers.