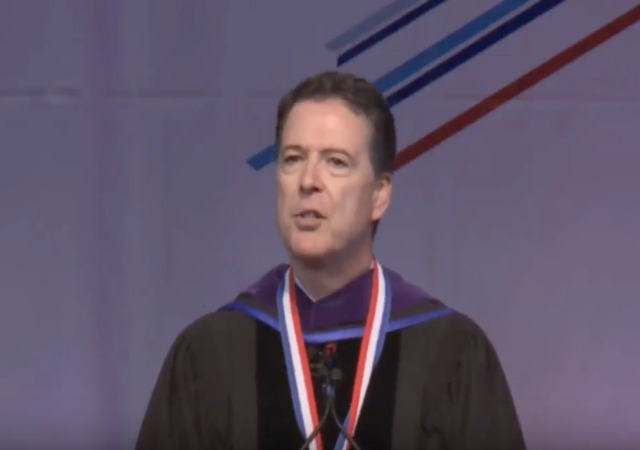 In August, former FBI director James Comey accepted a lecture post at Howard University. On Friday, he tried to deliver a convocation address at the university, but protesters interrupted his speech, causing “him to delay his remarks and then practically drowning out the rest of his speech.” From Fox News:

The protest started as soon as the former FBI director took the podium at the historically black college in Washington, D.C.

Protesters raised their right fists in the air and chanted, “We shall not be moved.” They also said, “F— James Comey” and “No justice, no peace.”

Comey was unable to speak at first due to the disruption. After several minutes, Comey tried to begin.

“I hope you’ll stay and listen to what I have to say. … I listened to you for five minutes,” he said.

After several more minutes of protests, Comey launched into his prepared speech – which, ironically, was about how the rest of the world is often “too noisy” to take time to reflect, whereas Howard University represents an “island.”

Comey said he appreciated the protesters “enthusiasm” but wishes they could understand “what a conversation is.”

“At the end of a conversation, we’re both smarter. I am here at Howard to try to get smarter, to try to be useful,” Comey said.

He should be in jail, posting bond, but I still say let him speak… Til his & my dying breath.

Well … a chance to rhyme “Comey” and “homie” is hard to resist.