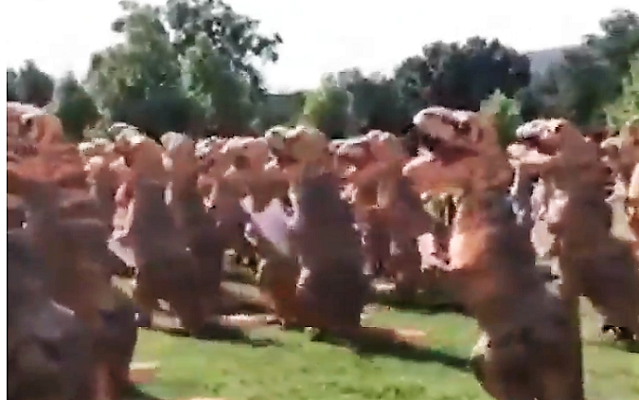 In an eye-roll moment, a bunch of adults donned dinosaur costumes to dance around DC in protest of cuts President Trump proposed to scale back the vast expansion of national service enacted under Obama.

Protesters dressed as dinosaurs marched in front of the White House on Wednesday to demonstrate against President Trump’s proposed cuts to national service programs such as the Peace Corps and AmeriCorps.

The protesters were speaking out against Trump’s proposed 2018 budget, which would cut the Corporation for National and Community Service, including AmeriCorps, and funds for other similar programs.

The demonstrators even made their way to Capitol Hill to appeal to members of Congress who have the final say on Trump’s budget.

One reportedly yelled, “We’re coming to get you!” according to USA Today.

Nothing says “take my cause seriously” like dressing up as a tip-toeing dinosaur.

i don’t have a problem with these organizations.
if people feel that it is worth funding, then get the mega rich internet giants to pay for it.
google, facebook etc have BILLIONS so let them pay for it.
why should joe shmoe foot the bill with tax funds ?
as an aside then feds are also on the hook for lawsuits associated with these programs.

Buried lede: those dinosaur costumes aren’t cheap. They’re about $80-$100 apiece. Who paid for all that?

Not nearly inclusive enough. Next time they need to dress as dinosaur vaginas.