“I think it’s a privilege to teach future dead cops” 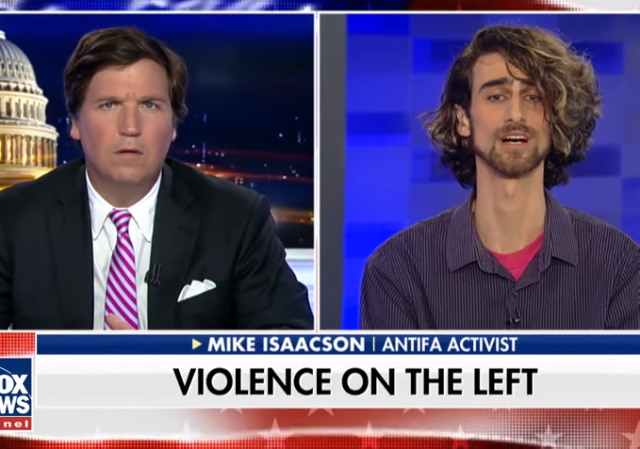 Mike Isaacson is a professor at John Jay College of Criminal Justice, a part of the City University of New York. He is openly pro-Antifa violence and has been suspended following a series of tweets in which he joked about police deaths.

Isaacson appeared on the Tucker Carlson show last week. During their discussion, Tucker was barely able to hide his disbelief over what was being said.

Antifa – or “anti-fascist” – groups have made headlines in recent months for violently protesting conservative or alt-right events, perhaps most infamously Milo Yiannopoulos’ speech at UC-Berkeley in February.

Mike Isaacson, a professor at John Jay College of Criminal Justice and founder of Smash Racism D.C., argued that Antifa activists have the right to respond to violence with violence.

Carlson said Isaacson is “blurring the lines” between physical violence and speech with which he disagrees.

“You’re conflating violence with ideas,” Carlson said. “If I have not raised my hand to strike you, you have no right to strike me.”

He asked Isaacson if he teaches his students that the First Amendment does not apply to people they disagree with.

“I teach them to think critically, and that’s why I’m very open about my anti-fascism and my anarchism,” Isaacson said, adding he has had students who were Trump supporters or members of the alt-right and he held them to the same standards as any other student.

“I don’t believe you,” Carlson fired back.

Among his other outrageous claims, are these gems:

His more recent tweets began to gain notice among police advocates and conservatives on Twitter. Especially this one:

Ian Miles Cheong wrote about it at the Daily Caller:

Mike Isaacson, a professor at the John Jay College of Criminal Justice and a co-founder of the Antifa organization Smash Racism D.C., promotes political violence. In a series of tweets, he also laughed at dead police officers.

Isaacson shared his support of political violence in an interview with The Hill Thursday, which was pointed out by Far Left Watch. The article, which explores the Antifa movement and its proponents in academia, got a few choice quotes from the professor.

“The justification [of the use of violence] is that Nazi ideology at its very core is founded on violence and on wielding power by any means,” Isaacson said.

One day later, Cheong reported that Isaacson had been suspended:

Mike Isaacson, a professor at the John Jay College of Criminal Justice who made numerous jokes about dead cops and openly supports Antifa, has been placed on administrative leave by the school.

The college contacted The Daily Caller Friday with a statement from college president Karol V. Mason to announce that the professor has been placed on administrative leave following TheDC reporting on Isaacson’s comments. The report prompted users on social media to participate in a popular #FireMike Twitter hashtag calling for the college to take action against him.

Here’s part of the statement the Daily Caller received:

“I am appalled that anyone associated with John Jay, with our proud history of supporting law enforcement authorities, would suggest that violence against police is ever acceptable. I join with the many students, faculty, alumni and other members of our community in condemning these statements. The John Jay alumni who work in law enforcement, and the students who aspire to careers in law enforcement, represent our best. They secure the safety of our families and communities and deserve our respect.

.
For the most part, Isaacson’s tweets shown here have many more comments than likes.

Maybe that’s one reliable indication of an idiot.

Isaacson looked familiar, then I realized it’s the Ronald McDonald Miller ‘look’ from “Can’t Buy Me Love” movie. I wonder if he knows the African Anteater dance too.

Libertarian thinking (and there is thinking behind libertarian-ism) can sometimes go off beam by a few degrees, and you wind up with an anarchist.

This guy again proves my point about “You can rationalize anything”.

I have now found an article at the Washington Post that describes him as an adjunct professor.

Why should tenure protect him? He is truly deplorable.

Did not mean to down ding you but simply reply…

The simple answer is “because lawsuits”

Tenure can be revoked, but it is not done easily, quietly, or regularly, simply because of the logistics.

Let me try again. My real question is why do teachers have tenure? I get that it is purportedly to “protect academic freedom,” but does it protect that for conservative faculty? If you are honest, the answer is No. And how does anyone deserve protection from advocating that “Antifa activists have the right to respond to violence with violence.”

Yes, it does protect conservative faculty as well. Several post and write for this site and can do so openly because of it.

Being in the academy, I don’t know that it is a “good thing” for all parties (other than those who obviously possess it, they tend to be BIG fans).

While the left will scream and cry wolf and do everything to entice someone or over a line, there are still lines in the sand and still a rule of law…as of this moment.

The real issue to take up now (since progressive faculty are already entrenched and infested among the tenured faculty in large numbers) is the lack of diversity of thought and the borderline illegal and undoubtedly unethical stonewalling of conservative scholars from employment and advancement.

This guy just outed himself way early in the process and verbalized his way out of anywhere but the most “Evergreen” of institutions. That’s his own Darwinian idiocy.

Sadly, though, he isn’t even finished in this business; this might be an audition for the right job at the right pinko landing spot.

Last thing I will say about tenure and a good reason why it should exist in the academic ecosystem: walk a mile in a professor’s shoes with even one round of year-end anonymous reviews from students at colleges these days.

It can be very hard for anyone not in the industry or who was a good student in college to understand because we tended to like our professors and do honest, good work without expecting to negotiate for our grades. Sadly, qualities of work ethic, self-awareness, and academic decorum are uncontrolled confounds in these evaluations. You would be amazed at how a small minority of losers, bluntly speaking, can skew these results. Not surprisingly, these evaluations and an abhorrent customer service mentality are a causative factor in the grade inflation running rampant through our current higher ed system.

I thought “pencil-necked geek”. I repudiate myself….

That’s a diversity judgment of the progressive kind. Judge him on his conservation of principles, or rather the lack thereof.

If this “professor” is so thoroughly sold on violence as the way forward, I wonder how he will feel on the day the calculation is made by the opposition that he is indeed correct. From the looks of him, he would not hold up well against men who have decided to put an end to the likes of him and his “antifas”.

And some people still don’t understand that progs/leftys suffer from a mental disorder !

Clearly, bullies him we’re always bullies. I bet there’s a long line of kids whose lunch money he stole, some he punched, and hung signs on their backs saying “kick me.” Let’s take away his ability to do the equivalent of those things today. And for gods sake, get some professional help regarding that mop with the Veronica Lake peekaboo look.

I seriously doubt that pencil-necked idiot ever did anything so macho as bully anyone, much less punch them. In fact he looks like a sniveling little narc who loved to snitch to the teacher at every opportunity.

Should this mook ever get himself arrested, and the arresting officers know who he is, I’m guessing he might try to escape and have to be restrained from doing so with great repeated force.

Yep. And it will be a (very unreported) testament to the integrity of our LEOs if he is NOT.

Well, beside it being so far beneath them to hit a shit-bag.

He’s a ‘professor’ like that fraud obama was a professor:

Note that the Daily Caller article quotes someone at John Jay as saying that the professor made “numerous jokes about dead cops.” Does anyone else believe that his statements were mere jokes? Specifically, does college president Karol V. Mason really believe that Isaacson was just joking, and has this claim been proved to be true (and if so, how was/will it be proved)? Isn’t that always the explanation when lefties gets caught saying what they really think? We all know the standard collection of excuses: “I was just joking.” “I was quoted out of context.” “You misunderstood me.”

He’ll come forward with an apology, just like whats-her-name who photographed herself holding up a fake bloody Trump head. I won’t believe him any more than I did her. I hope this professor is not only removed from his teaching position but also experiences a public disapproval so strong that he, too, feels compelled to leave our blessed country. From the Daily Caller article quoted in this post: “#FireMike Twitter hashtag calling for the college to take action against him.”

Certainly his views are repugnant. But if we believe in 2A then he gets to say what he wants. However, he may be in violation of a morals clause in his contract. Someone there needs to check that closely. And he should walk everywhere, not drive.

Hey, no problem. I respect his right to speak his mind. Not that would take very long…

I just want the progs to respect our free speech rights while we speak our minds about the fact that he’s a SCoaMF.

My apologies. I meant the First Amendment.

Look at that top photo. Tucker looks astounded he’s having a conversation with a giraffe.

Am I the only person who really digs this guy’s look? Eh. It happened before. Here, let me show you what I mean.

This wasn’t so much of a joke as it was his actual way of thinking.