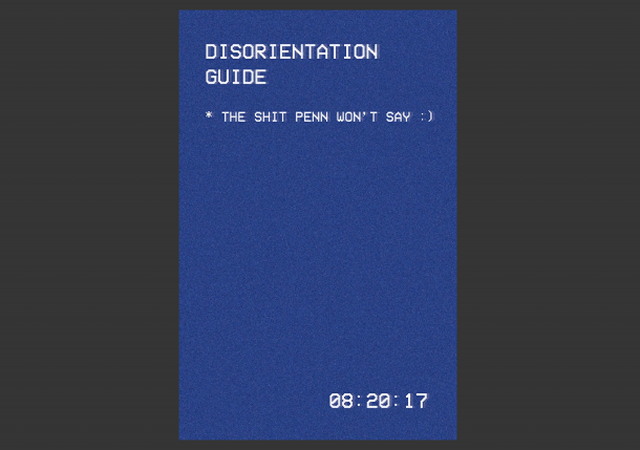 If I ran this school, I’d find the students responsible for this and send them home. Oh, you don’t like it here? No problem! See ya!

Various orientation packets were distributed by the University to new students during orientation last week, but a new, student-produced guide surfaced Monday.

Called the “Disorientation Guide *The S**t Penn Won’t Say,” the booklet is an expansive critique of Penn’s administration and school culture. It contains articles by 15 Penn students on a range of issues including incidents of racism and sexual assault on campus, as well as challenges faced by first-generation, low-income students at Penn.

“Congrats, you’ve made it to the top university in the world!!” writes the opening sentence in the guide. “There are a few things we forgot to mention in your glossy orientation packets. Like our larger white capitalist imperialist values that are central to the core of our money sucking busine — err higher-education institution.”

University spokesperson Stephen MacCarthy did not respond to request for comment.

College senior Miru Osuga was one of the students behind the guide. She came up with the idea after hearing about similar guides being made at Wesleyan University and Cornell University.

“There were all these guides that covered a huge amount of topics that I wish I had access to when I was a freshman,” Osuga said. “And I thought that if I had seen this information when I had come in, and just really know what was going on at Penn, there would be so many other students who would want access to this information as well.”

“…that are central to the core of our money sucking busine…”
Like the best lies, this one mixes truth in to make it more believable.
Higher education in this country is partly a massive scam. Some valid fields still exist, but they are under constant pressure by bureaucratic administrations and predatory social justice types who want to co-opt their legitimacy.